When Muneer Nawab says he started out in tech young, he really means it.

“My father was a computer science professor. He taught me to programbasically since I could read,” says Ottawa-born Nawab, who now lives inAjax, Ont.

With his new venture StartupsN.com, which recently won Startup Weekendin Hamilton, Ont., Nawab is now helping the next generation of youthlooking tostart out as tech entrepreneurs. 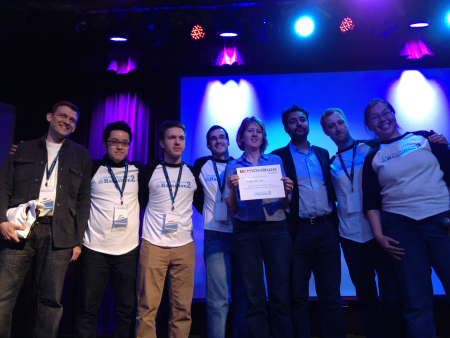 The StartupsN.com site, built on the LinkedIn and Meetup.com platforms,allows members of the startup world to strategically find and connectwith each other by using the existing base of connections they’vealready built up on both of those larger sites. Based on theirnetworking goals, users can search for new connections by industrysector, skills or job title.

“(It’s) a way to search your extended network effectively usingmultiple search terms and it ranks the prospects based on differentsectors,” Nawab explains. “Then it tracks who you’ve already contacted.And it presents you with 10 contacts each week that you should contact.”

A similar search function is already available on LinkedIn. But becauseStartupsN.com taps into the Meetup.com platform, you can also type inthe type of connection you want to meet, then see if they’ll be at anyupcoming events so you can meetthem in person.

“It tells you who are the best people at the event to network with,”Nawab says.

Long entrepreneurial history
Nawab got the idea for StartupsN.com while working on something similarcalled startupmatches.org, “kind of like eHarmony for” for startups andco-founders, he says. But that system could only match people upmanually, which took a long time.

“But we learned there’s a huge demand for this. People are reallylooking to build their business contacts and meet developers. Butthere’s a chicken and egg problem: you need to have this critical masson both sides,” Nawab says.

Since LinkedIn and Meetup.com already have large user bases, they wereideal to build a new platform on because they gave StartupsN.com aready-made critical mass of people to match up.

StartupsN.com plans to launch a public beta site within the next twomonths. Though his firm is targeting the startup world now, Nawabforesees tailoring the platform to other industries in future to widenits appeal. A U.S. startup called GoHachi is working on a similar siteconcept.

Nawab’s interest in tech didn’t end with his father teaching him towrite simple code. At 14 he started a business selling computers fromhome and also launched an Internet service provider venture. He thenwon a scholarship to work as a summer intern at Nortel Networks andlater got two degrees (one in computer science and another in businessand commerce) at Queen’s University. At Queen’s he founded the NationalTechnology Youth Leadership Conference to help boost enrolment inengineering and computer science programs at Canadian universities.

He’s now been an IT project manager at Procter & Gamble forseven years. Yet he’s still driven by the same kind of entrepreneurialrush he got from running his very first student tech startup plyingcomputers from his parents’ house. And some of the stuff he learnedback then is helping him now in today’s startup world.

“I was selling computers to people who were twice or three times myage,” he recalls. “That really developed my presentation skills.”

Christine Wonghttp://www.itbusiness.ca
Christine Wong has been an on-air reporter for a national daily show on Rogers TV and at High Tech TV, a weekly news magazine on CTV's Ottawa affiliate. She was also an associate producer at Report On Business Television (now called BNN) and CBC's The Hour With George Stroumboulopoulos. As an associate producer at Slice TV, she helped launch two national daily talk shows, The Mom Show and Three Takes. Recently, she was a Staff Writer at ITBusiness.ca and is now a freelance contributor.
Previous article
Canada Post poised to roll out digital mailbox system
Next article
Panasonic smartphone talks to appliances