Soon to be released HTC Touch Pro2 is feature rich, but resembles brick

The HTC Touch Pro2 smartphone harkens back to a more retro approach to the mobile device, but it still comes loaded and ready to rock with many powerful features.

Telus is set to offer this device exclusively in the Canadian market any day now, but let ITBusiness.ca get an advanced hands-on review of the device.

This huge device attempts to do it all – a large touch screen with a slide-out QWERTY keyboard, and an included stylus to boot. It even includes Wi-Fi – a rarity from Telus these days.

After using the device for a few days, it’s apparent that it has all the latest specs and features. It will handle the expectations of a business user and please mobile media aficionados alike.

But its clunky form factor and feel might turn off some who want a slicker smartphone experience. 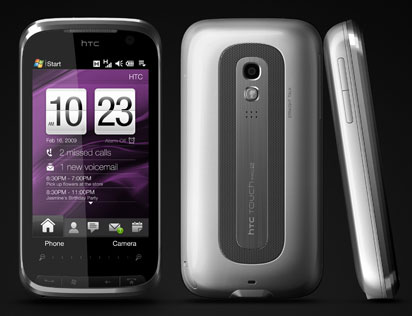 The sheer size and weight of the Touch Pro2 surprised me at first. In an age when smartphones are competing for compact size, slim profiles, and feather-light weights, this goes against the trend. It’s like the brick of smartphones.

But the ample real estate is put to good use. After using the Touch Pro2 for awhile, you start to think of it less as a bulky phone, and more as a really compact micro-computer.

The LCD touch screen is a pleasing 3.6 inches, dominating the front of the device and leaving room for four small buttons along the bottom – Send, End Call, a Start Menu short cut, and an escape key.

A touch-sensitive bar along the bottom of the touch screen invites you to zoom in on Web sites by moving your finger from left to right, or to zoom out by doing the opposite.

The slide-out capability is the best thing about this device and its ability to angle upwards at 45 degrees and point the screen towards you makes the Touch Pro2 really unique. The device can sit upright like this on a desk, allowing you to watch or read something hands free. 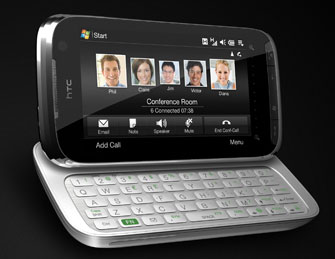 The QWERTY keyboard is simply huge for a smartphone. It offers five rows – one dedicated to numbers, and each key is a wide rectangle that stretches across the length of the device.

The size of the keys and the space between them make typing very easy for a keyboard of this form factor. Your thumbs will be able to find their targets and make few mistakes. Having quick access to the numbers is a big bonus.

It’s hard to believe you might think this keyboard is too big, since this is a smart phone, but you might. The keyboard is so wide that you’ll find your thumbs suddenly become contortion artists as they bend to hit that shift key in the corner.

HTC’s choice in using Windows Mobile 6.1 for its mobile device is puzzling. The manufacturer has apparently decided the compatibility with user’s PCs and the built-in Mobile Office applications are still enough of a sell for this ageing operating system.

HTC has done its best to spruce up the OS that was released April 1, 2008 (no fooling) with its TouchFLO 3D interface. It basically replaces the tiny icons and Start Menu with large, finger-touch friendly icons.

But it is telling that the device still includes the archaic stylus at its side. You’ll be unsheathing this slender piece of plastic more than you’d like.

The Touch Flo2’s home screen presents a main window showing your content, with a selection of tasks in rectangular icons along the bottom. You can switch to these tasks by tapping the icon, or browse through them by swiping your finger in a sideways motion.

Tapping the Start Menu reveals more tasks that can be launched from square icons. To really see all of the applications available on the phone, you’ll have to tap “All Programs” at the lower left-hand corner. But you can add short cuts to those buried applications on more accessible screens.

There’s also a taskbar at the top of the device that allows you to switch between open applications (yes, you can multi-task). The notification bar also shows you what connections are active, and your battery life.

The touch interface feels decent, but is certainly not at the level of the iPhone or Google’s Android platform. You’ll find the Touch Flo2 misinterprets your finger gestures and sometimes doesn’t react at all.

For example, you’ll accidentally select a contact when you really wanted to scroll further down the screen and see someone lower on the list. But the device thought you were tapping when you were really gliding.

That’s when you’ll glumly pull out the stylus to navigate around the device, sacrificing your laziness for something more accurate.

The Touch Pro2 should fulfill the business needs of almost every mobile worker. It comes loaded with organizing features, synchronization ability, and document creation and editing abilities.

The mobile version of Microsoft Office means you can get work done on the go. With Word Mobile, Excel Mobile, PowerPoint Mobile, and OneNote Mobile, you can either create new files or open up existing files and edit away.

There’s also JETCET software on the device that can be used to edit PowerPoint slides or print them.

PDF files can be read with a mobile version of Adobe Reader.

If you don’t see these handy business applications at first, don’t fret. They’re tucked away behind the shiny veneer of HTC’s TouchFLO 3D user interface. Just click the Start Menu button, then select “All Programs” in the lower left hand corner of the screen.

There’s a lot of powerful synching abilities made available. You can use Microsoft ActiveSync to do this in Windows XP, or Windows Mobile Device Centre in Vista.

The tools make it easy to load your calendar, contacts, notes, tasks, desktop files, and media on to your device. Microsoft Outlook’s data is basically copied into your phone upon its connection with ActiveSync. You can use Media Player 10 and up to manage the media files you want on your device.

Enterprise phone users can make use of the ActiveSync Exchange feature to get push e-mail. For personal accounts, you can adjust how often the device checks the server for new messages.

You’ll also appreciate the conference call and speaker phone features on the Touch Pro2. The device comes equipped with a noise-cancelling microphone and a loud speaker. My experience using this was quite good. There is minimal distortion on the speakers, and they are very loud for a smartphone. No one complained about my voice quality over the speakerphone.

HTC’s site says that arranging conference calls is easy, and you can just press your different contacts to add them to a conversation. But I must admit this feature eluded me. Once I had someone on the line, I couldn’t figure out how to add another contact.

The Touch Pro2 offers the best mobile YouTube experience I’ve seen since the iPhone. Thanks a built-in application that you access from the Browser home screen, streaming video is easy and fun.

By default, the “Most Viewed” videos of the day load in the YouTube application. But you can bookmark your favourite videos and also see a history of the videos you’ve watched. You can search for videos too.

Playing a video takes advantage of the huge (relatively speaking) 3.6” screen on this mobile device and its awesome 480 x 800 pixel resolution. Videos look sharp and play back at full screen size, in the horizontal landscape mode. Tapping the screen brings up a translucent VCR controls menu.

The ability to tilt your screen upwards also means you can put this down on a desk surface and enjoy videos. Play the audio back through the speakers and a small group can gather ‘round and enjoy the show.

Telus also provides a mobile TV service if you’re a real couch potato. The media player device will organize your mp3s and video files for easy organization and playback.

The standard 3.5 mm headphone jack ensures you can use your favourite pair of ear buds to enjoy your media. There’s also the option to expand your storage with a microSD card slot.

The Touch Flo2 comes with Opera Mobile pre-installed. Though the mobile version of Internet Explorer is on the device too, if you want to dig it up and torture yourself.

Web sites load quick – especially mobile formatted sites – on the Telus 3G network. You’ll also be pleased to find the option to connect to a Wi-Fi network on the phone. This is found in the options, and you can monitor your connection from the task bar.

The interface for Web browsing had a couple of problems. The touch screen seems to have trouble being accurate enough to determine exactly where you are clicking on screen. You’ll have many occasions where you click on the wrong link or intend to scroll, but instead open a new page.

The zoom-in bar under the touch screen windows is also unreliable. It sometimes will zoom in, and sometimes it doesn’t respond. Its hard to guess how the bar is calibrated and you’ll often find you’ve zoomed in way too far and are staring at one or two super-sized letters.

There will be a certain type of gadget geek who will love this device. If your approach to the smartphone is that it should be more of a powerful workhorse, a veritable computer in your pocket, then this is the phone for you.

But if you see smartphones as a type of computing device that offers a simpler experience, one that is slick and novel, different from that of a sit-down and click around session on the old desktop box, this is not for you.

It will be attractive to certain businesses because of the push e-mail capability and Office Mobile applications. Not too mention the synching, organizing, and conference call capabilities (the ones I couldn’t quite figure out how to use).

It might be a brick of a smartphone, but it does perform.

Telus has yet to release the pricing and rate plans for this phone.