A new study conducted by Ipsos for Microsoft Corp. finds that small and medium-sized businesses (SMBs) are more likely to embrace external social tools to fuel workplace collaboration than their enterprise cousins.

Nearly 10,000 end users in SMBs and enterprises in 32 countries were surveyed for the study, which found that SMBs are more likely to use multiple external social tools for professional purposes, as well as other solutions such as intranets and instant messaging services. Larger companies were more likely to deploy fewer, more prevalent collaboration tools.

How do you calculate the ROI on tools that create entirely new forms of collaborations? According to a senior IT executive, sometimes you don't. In this episode of CIO TV, a new series

IT-friendly businesses do better – but Canadians less confident about IT

Small to mid-sized businesses (SMBs) who show more confidence in their IT departments are better at using IT to boost their business - yet Canada lags behind in its support of IT, says

“Social collaboration technologies represent a growing opportunity for partners with strong demand from end users at both large companies and SMBs,” said Jon Roskill, corporate vice-president of Microsoft’s worldwide partner group, in a statement. “However, each segment uses these technologies in different ways, with SMBs seeing public FTP/cloud storage, external social networks, blogging platforms while large companies clearly prefer intranets, team sites and videoconferencing. We believe Microsoft has the expertise, the portfolio and the vision to make the future of workplace collaboration a reality.”

The study found that employees at smaller companies tend to use social tools for a broader range of external tasks, such as communicating with customers, clients or vendors and researching customers, clients and competitors, while enterprises tend to be more focused on in-company collaboration. 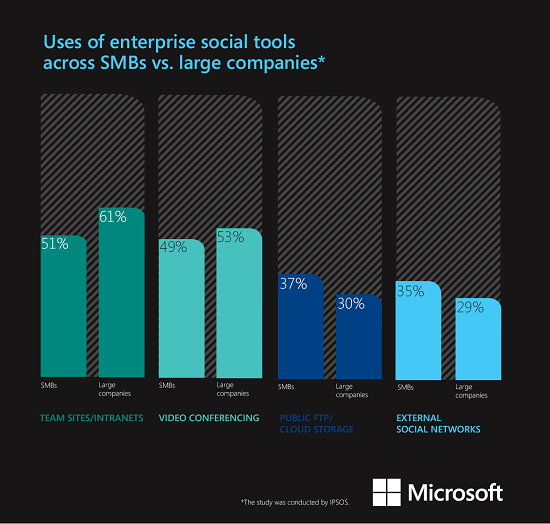 When it comes to barriers to adoption, 60 per cent of SMB end users identified security concerns and 59 per cent identified productivity loss, while 36 per cent said their IT departments were a barrier.

“The consumerization of IT has changed the fundamental way in which businesses communicate, with enterprise social tools now following a ‘bring your own device’ model into the workplace,” said Rebecca Sizelove, associate vice-president of Ipsos Public Affairs, in a statement. “However, there are distinct differences between how SMBs and large companies adopt these tools, and technology decision-makers still require a certain amount of education around the benefits social tools can provide.”