The site did a soft launch in January featuring funding sources onlyavailable in Quebec and then added Ontario financing sources in May.Fundica officially launched the revamped site this week listing fundingsources across Canada.

Founding partner Mike Lee, a financing consultant with a private firmin Montreal, developed the site after seeing too many frustratedentrepreneurs spend months on the Web in search of financing programs. 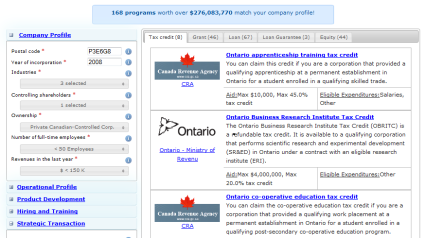 “Helping people get funding in the consulting world, we kind of know the programs and tax credits out there. There’s probably five or 10 programs you can kind of keep in your memory and keep up to date on. But after that it’s almost impossible to do that,” Lee says. “We really scour everything we can and use Web tools to track it.”

Site may help financiers as well as startups

Though various government agencies and industry organizations already put out lists of financing sources through books, CDs and Web sites, navigating the hodge podge maze of information eats up a lot of entrepreneurs’ time and resources, Lee says.

“A lot of the government sites are even out of date,” he adds. “And those (other lists), I don’t want them to just filter (funding programs) but show me which ones really apply to me. So filtering is extremely valuable.”

Entrepreneurs can access basic listing details on the Fundica site for free. Users can pay $499 per year to subscribe to the site’s Pro content that includes extra details like additional contact information and application forms for funding providers, the ability to track 10 startup companies and all of their activity on the site (useful for venture capitalists, consultants or other financing providers, Lee says), and automatic notifications when relevant new funding programs become available for those 10 companies. The Pro version also gives users the ability to import Fundica content to Excel spreadsheets.

Although three Fundica researchers work to post profiles of funding sources on the site and update their listings, funding providers can go on the site themselves to modify their own profiles for free.

“The VCs get a lot of garbage (ie, weak or irrelevant pitches) so hopefully we can improve the quality of what they’re getting.”

Invest Quebec, one of the Quebec government’s biggest financing agencies, actually contacted Fundica to thank them for helping to improve the submissions to its programs. And a federal funding agency, once in danger of losing its budget because it hadn’t received enough applications, also told the company its volume of applications is now“suddenly ramping up,” Lee said.

In other startup related news, lawmakers in both the U.S. and Finland are making moves to boost access to financing for fledgling companies.

What Toronto could learn from other ICT hubs:

Introduced late last week in the U.S. senate, the bipartisan Startup Act would, if passed,provide a corporate tax credit of up to $5 million for approved SMBs intheir first taxable year of profit followed by a 50 per cent corporateincome tax exclusion in the two succeeding taxable years.

The Act would also open the door to reforms for regulatory red tapelike the Sarbanes-Oxley Act, created in2002 after the Enron Corp. scandal to tightenaccounting, management and financial reporting rules for publiccompanies. In addition, the Startup Act would create a special new visafor up to 50,000 immigrants per year who graduate from U.S.universities with a PhD. in science, technology, engineering ormathematics to encourage them to stay and work in the U.S.

In Finland, a parliamentary working group on startups said this weekit’s approaching pension funds and other institutional investors todrum up more funding opportunities for emerging companies. The groupplans to release a more detailed proposal of other measures to booststartups in January.

Christine Wonghttp://www.itbusiness.ca
Christine Wong has been an on-air reporter for a national daily show on Rogers TV and at High Tech TV, a weekly news magazine on CTV's Ottawa affiliate. She was also an associate producer at Report On Business Television (now called BNN) and CBC's The Hour With George Stroumboulopoulos. As an associate producer at Slice TV, she helped launch two national daily talk shows, The Mom Show and Three Takes. Recently, she was a Staff Writer at ITBusiness.ca and is now a freelance contributor.
Previous article
Apple’s bittersweet 2011 saw innovation, controversy, loss
Next article
Hands-free phones impair driving