Neil Harbisson started his life grappling with a challenge that he wasn’t even aware that he had at first – he couldn’t see colour.

Before the age of 11, he’d remember the colours of certain things – he knew the sky was blue and that grass was green – but when encountering new items, he could only give his best guess at colour since to his eye, the world is in grey scale.

“I hated the existence of colour,” he shared with the audience at Toronto-based Mesh conference. But he’s since changed that perspective, turning his challenge into an opportunity and transforming his impaired sense into an ability to perceive colours beyond that of human vision and even from outside his own self. 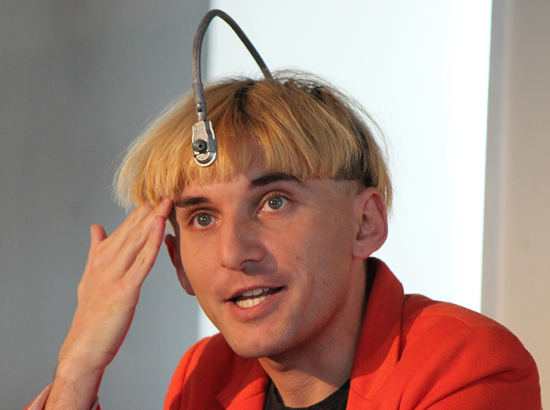 After learning about his colour blindness, Harbisson learned to associate colours with notes on a piano so he could get a feeling for colour by hearing the differences. But by 2003 he was investigating the field of cybernetics for a potential way to allow him to perceive colour. He eventually found a scientist that helped him create technology that combined a 5 kg computer connected to a webcam and headphones. The computer would down-sample light frequency into an audible tone that Harbisson could hear by wearing the headphones. So the colour red would be an F or F sharp, for example.

Towards a transhuman era?
3 IBM patents that lead to cyborg future
Rdigitalife: Is ‘robot evolution’ humanity’s next phase?

“It was really heavy at first,” he says. Harbisson would also get headaches because of all the new input all the time. But he stuck with it and after five months his body adapted to the new stimulus.

Over the years, the technology got smaller and Harbisson started wearing the gear underneath his clothing. He discovered he didn’t need to wear headphones, but could conduct sound through the bones on his head with the right attachments. Then he designed the antenna that he would implant directly into his skull.

“I had to find a doctor to implant all this, most doctors said no,” he says. Harbisson also had to convince a bio-ethical committee the operation was a good idea – the first one rejected him, so he found another one that approved him. He had four holes drilled into his skull to install the antenna he has today and is included in his passport photo.

Today Harbisson is the co-creator of the Barcelona-based Cyborg Foundation, an organization that seeks to defend cyborg rights and help people interested in becoming cyborgs do so. The organization also explores the use of cyborg-enhanced perception for artistic exploration.

“Cyborgism is a part of a growing art movement where artists will no longer express themselves through their senses,” he says. “It’s a type of art that connect us to other animal species.”

As you’d imagine, having an antenna protruding from the top of his head means that daily life is different for Harbisson. He describes the grocery store as an exciting place to be because of all the colours he can hear at once, he has a lot of trouble with airport security, and people often mistake him for being employed by Google Street View. Plus his wardrobe selection is informed by a different sort of fashion sensibility.

“If I go to a funeral, I’d wear orange, yellow, and pink because that’s a minor chord,” he says.

He also has to worry about getting hacked. Only four people have the phone number that connects to the Bluetooth in his head. “They could send me colours when I’m asleep and wake me up. This is the downside of Bluetooth.”

But Harbisson’s unique status as a cyborg may not last forever. He foresees a future where it will become more commonplace. He predicts that by the year 2030, it will be common for people to want to integrate technology into their bodies, and that by 2050 we’ll be modifying our genes to be cybernetic.

Going for trust and transparency in AI