New York – Samsung, with its new lineup of Windows 8 devices, is trying to mesh the needs of the living room with those of the boardroom.

At a launch event at the New Museum, Samsung Americas president TimBaxter unveiled new Windows 8 ultrabooks, notebooks, tablets,all-in-one PCs and a new category called Smart PCs. The Windows 8lineup will be branded ATIV, distinguishing it from the Android seriesof devices labeled Galaxy. The ATIV Smart PC currently has two models:the Pro 700 T and the 500T. Both units will give users the ability toswitch between a clamshell notebook PC and a tablet PC. Baxter told theaudience, made up of media, customers and partners, the PC business isat the centre of mobile computing, making it a market that is fastgrowing and also segmenting. 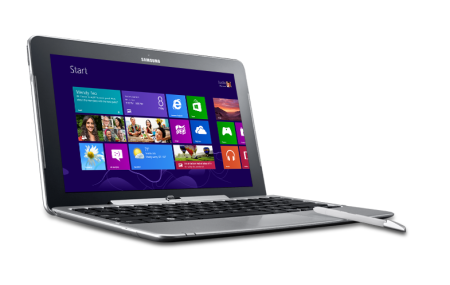 “A new category has arisen: the smart PC, which is a combination of aPC and a tablet, and Windows 8 is the linchpin,” he said.
At an entry level price point of $749, the Smart PC 500T features theSamsung S pen stylus, five-finger touch capability powered by an IntelAtom processor, 2GB of RAM, a 64GH SSD drive, and an 11.6-inch displaythat weighs 1.65 lbs. The Smart PC Pro 700T has 10-finger touch, anIntel Core i5 processor, 4GB of RAM, 128GB SSD drive, and an 11.6-inchscreen weighing just a bit more than the 500T. The Smart PC Pro 700T ispriced at $1,199.

Gunning for top five
Baxter stated that Samsung’s goal is to be a top five PC vendor by2015. The South Korean-based manufacturer re-entered the market back in2007. Since then it has slowly built up its product portfolio andwithin the last three years has become one of the fastest growing PCvendors, according to IDC.

Baxter also said the consumerization of IT trend and Windows 8 are twofactors that will help Samsung achieve its goal. With that in mind,Baxter has set up two teams to address the market from a consumer leveland an enterprise level. New to the consumer team is Mike Abary, whowill run the unit as its senior vice-president of consumer. Running theenterprise division is Tod Pike.

“Windows 8 is the catalyst for new categories of computing such as theSmart PC, but touch is also central to the Windows 8 experience,” Abarysaid.

Samsung released three touch-based products at the event. The SamsungSeries 5 ultra touch notebook is the company’s first notebook with10-finger multi-touch. Samsung will also bring to market two all-in-oneunits with touch capabilities: the Series 5, a 21-inch display modelwith 10-finger touch, and the Series 7 that also comes with 10-fingertouch along with hand gesture recognition. Jean-Paul Desmarais,marketing manager for Samsung Canada’s IT Solutions Business, said thehand gesture control “is like your hand has become the mouse.” Abaryadded that Smart PCs are the same as Smart TVs and apps become a bigpart of the experience for content creation and consumption.