Samsung touts 5G technology. But is it really 5G?

Get ready for the next buzzword in mobile marketing: 5G.

In a posting on Samsung Tomorrow, the official global blog of Samsung Electronics, the South Korean vendor announced it has “successfully developed the world’s first adaptive array transceiver technology operating in the millimeter-wave Ka bands for cellular communications.” What does that mean? It’s the technology that will form the core of the next generation of mobile communications – 5G – with speeds up to several hundred times faster than what’s possible today on a 4G network.

According to Samsung, 5G technology will enable a ubiquitous Gbps download experience, a big improvement for smartphone users. However, don’t rush out to buy a handset. A great deal of standards and regulatory work remains. The European Commission has targeted 2020 as a likely window for 5G services to come to market. 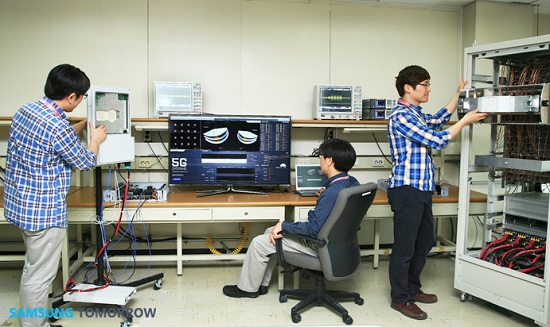 “The millimeter-wave band is the most effective solution to recent surges in wireless Internet usage,” said Chang Yeong Kim, executive vice-president of Samsung Electronics, in a statement. “Samsung’s recent success in developing the adaptive array transceiver technology has brought us one step closer to the commercialization of 5G mobile communications in the millimeter-wave bands.”

While Samsung’s news generated a great deal of online buzz, it wasn’t all popular. Gigaom, while lauding Samsung’s technical feat, also called it out for “making stuff up,” saying that, while Samsung’s technology will form part of the 5G networks of the future, as a standard 5G doesn’t even exist yet. It’s only a concept.

“The fact is, 5G only exists as barest concept today. Groups like METIS have just started investigating the technologies and network architectures that will comprise 5G networks a decade down the road,” wrote Gigaom’s Kevin Fritchard. “There is certainly no standards-based definition of 5G, and anyone who claims other is frankly making crap up.”

Jeff Jedras
Jeff Jedras is a technology journalist with IT World Canada and a member of the IT Business team. He began his career in technology journalism in the late 1990s, covering the Ottawa technology sector for Silicon Valley North and the Ottawa Business Journal. He later covered the technology scene in Vancouver before joining IT World Canada in Toronto in 2005, covering enterprise IT for ComputerWorld Canada and the channel for Computer Dealer News. His writing has also appeared in the Vancouver Sun & the Ottawa Citizen.
Previous articleRoamly offers businesses lower roaming charges
Next articleWayfinding tech points to emerging service market for Canadian firms