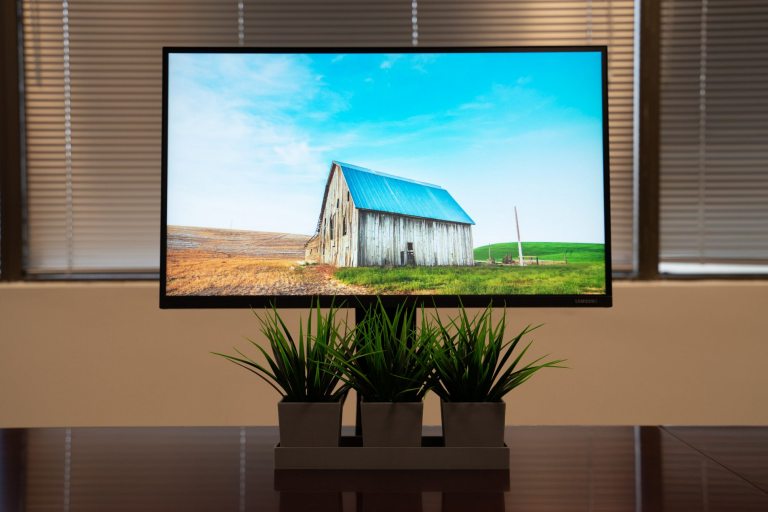 Regardless of how chaotic your work life is, I’d wager that your monitor always remains pristine and unobstructed amidst a cluttered desk. With that said, many desktop monitors have large stands that carve out a chunk of table surface. Wouldn’t it be great to use that area to store an extra book or two?

The Samsung Space monitor aims to solve that problem with its intriguing free-floating stand. Its solution is a stand that clamps onto your desk with a spring-loaded hinge that can set the monitor to any position.

The theme for the Space monitor is space conservation. See how tidy the work area looks without a bulbous stand at the bottom? 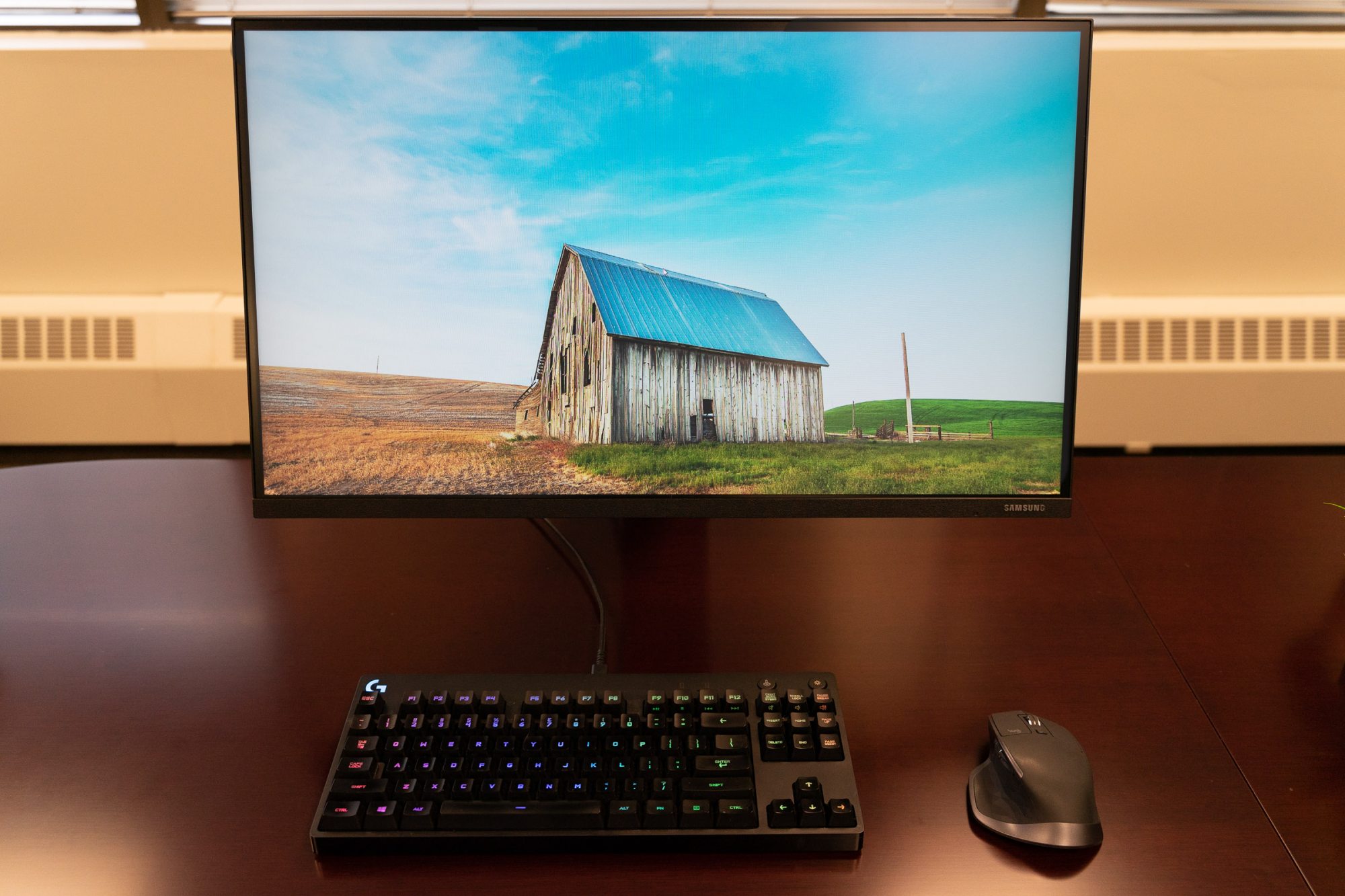 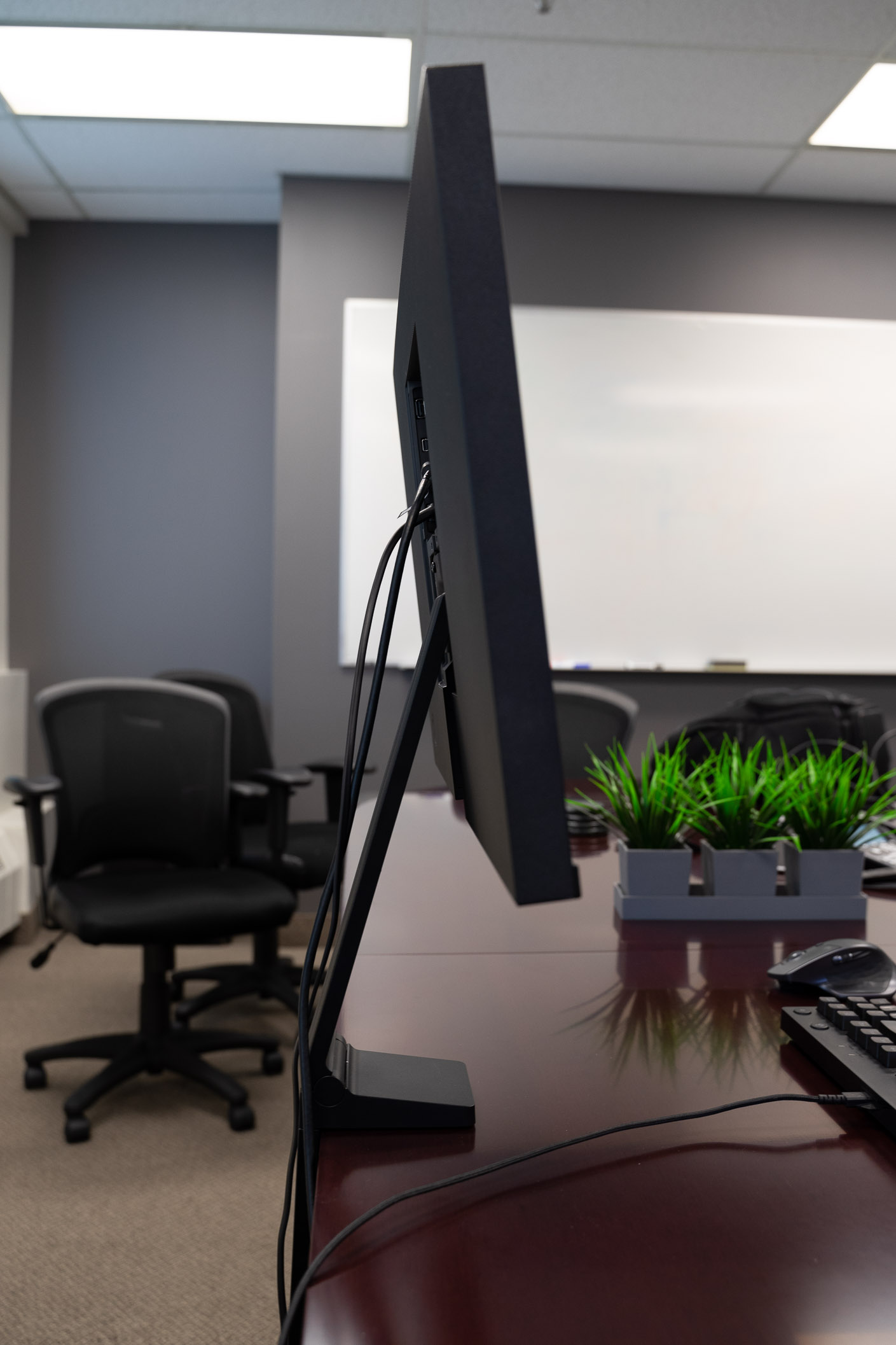 …and be pulled down when you’re ready to work. 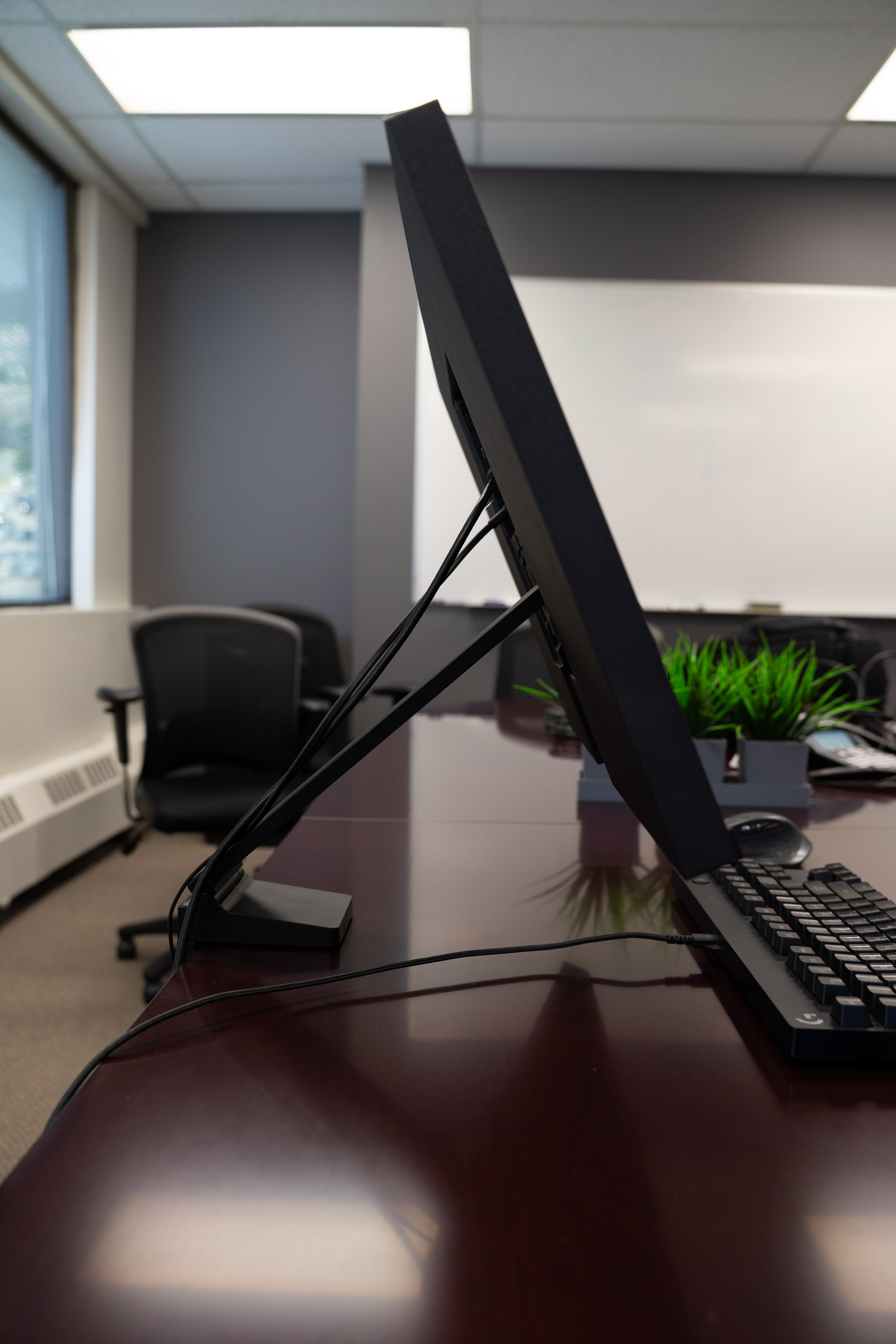 Despite its thickness, the bezels are razor-thin, adding to the monitor’s perceived floating appearance. 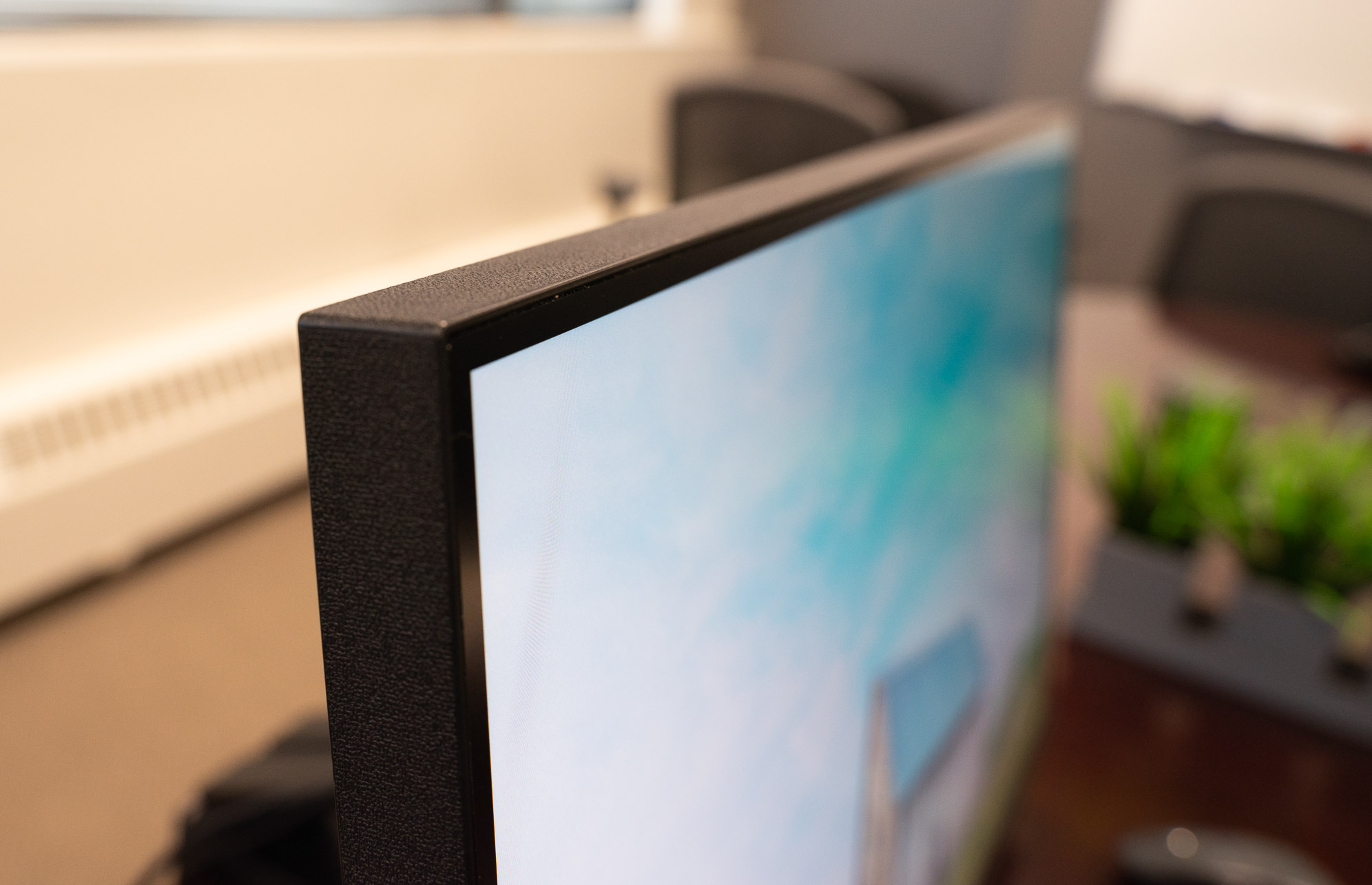 Bummer. The monitor only has two inputs: an HDMI and a mini display port. The USB port is used strictly for power delivery for peripheral devices. 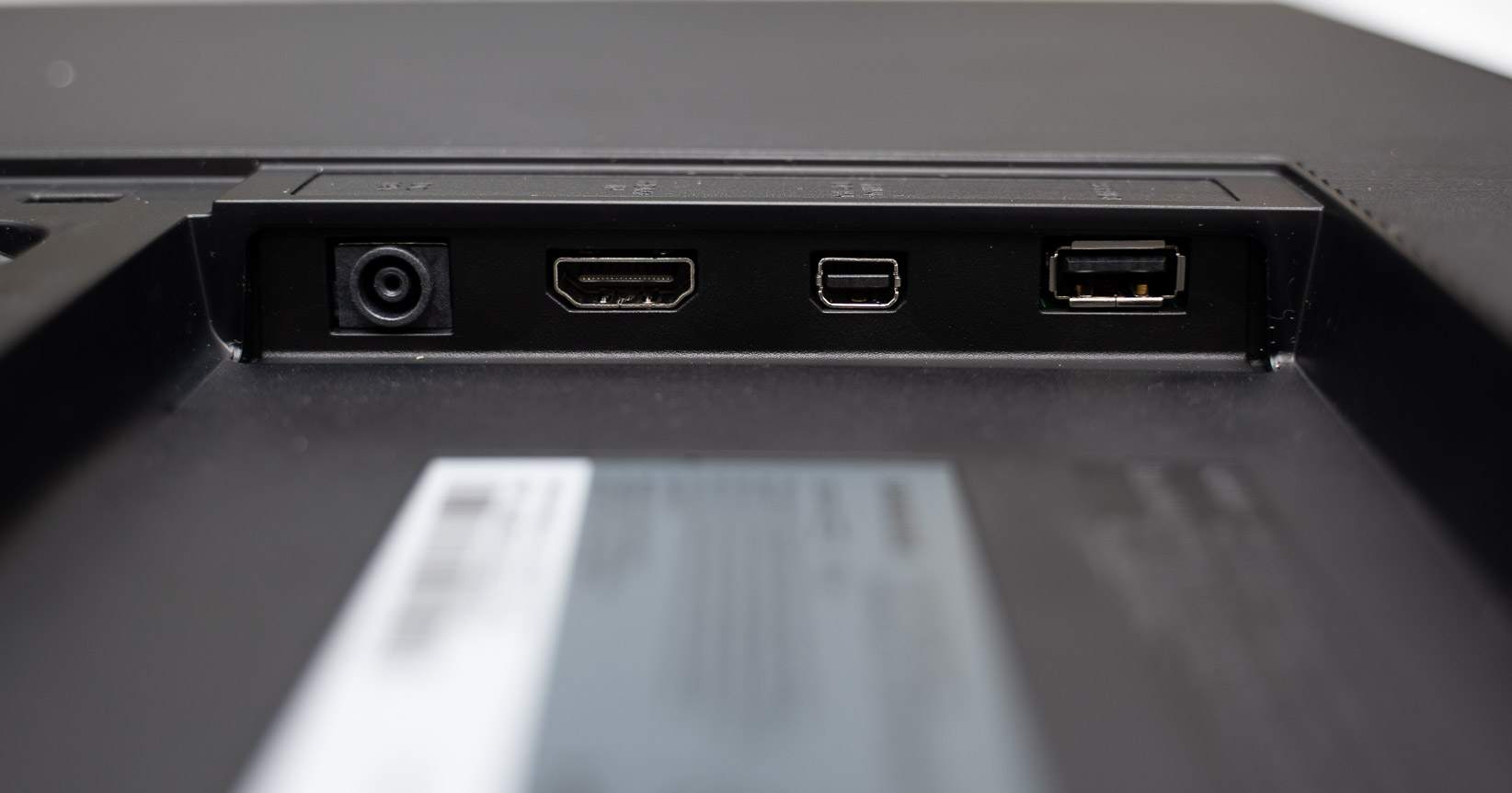 Setting up the monitor takes all but five minutes: simply clamp the stand onto the desk, mount the monitor, and tighten four screws at the back. Samsung even includes a single cable for both power and HDMI input, which can be snapped into the cable routing channels carved out on the back of the stand. 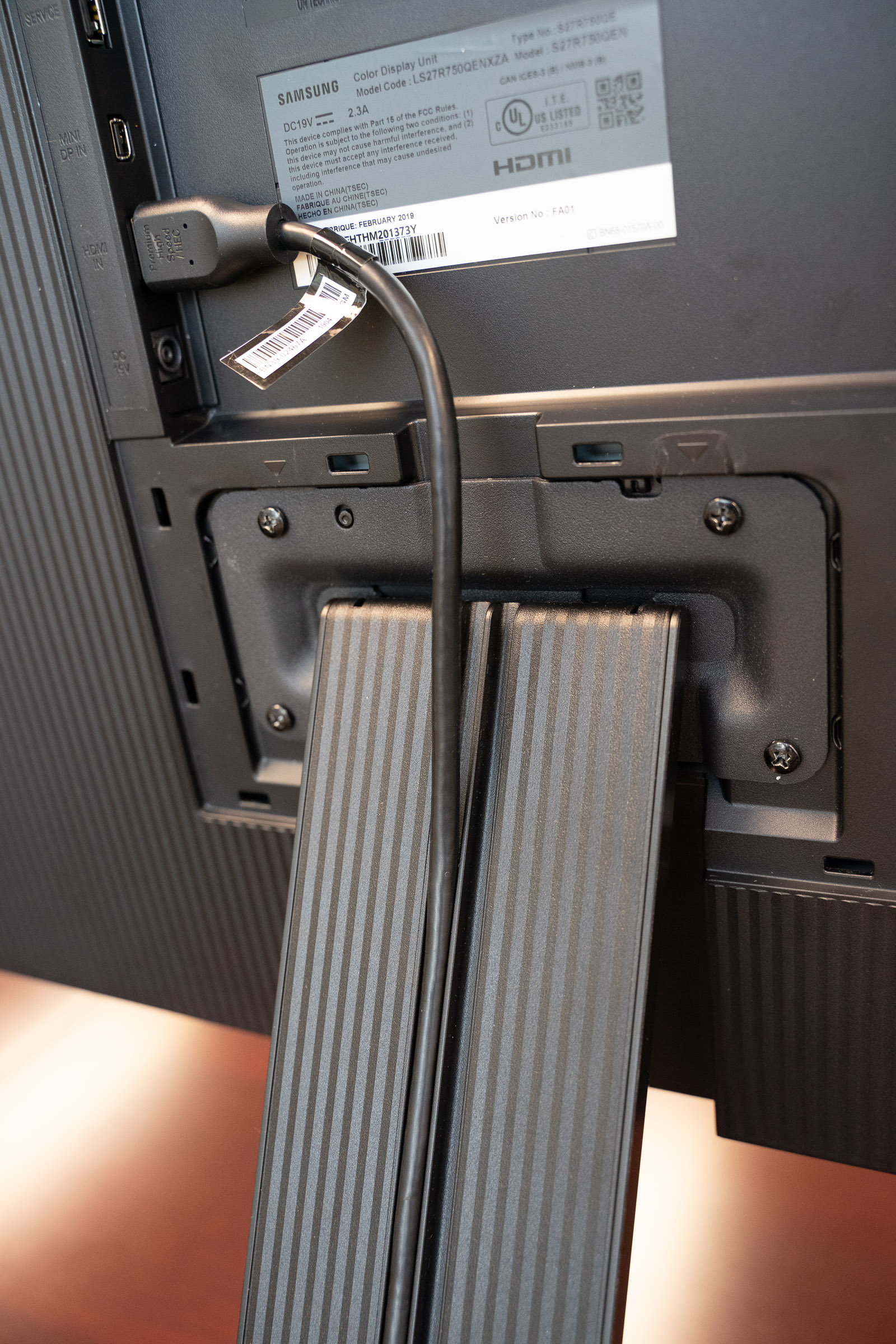 Half of what you pay for the Space Monitor is for the stand. Instead of sprawling out on your desk, the Space Monitor’s stand clamps on to the edge, freeing up precious space underneath for more decor, books, and other gadgets. The hinge is effortless to operate, sliding smoothly and held steadfast when left untouched. 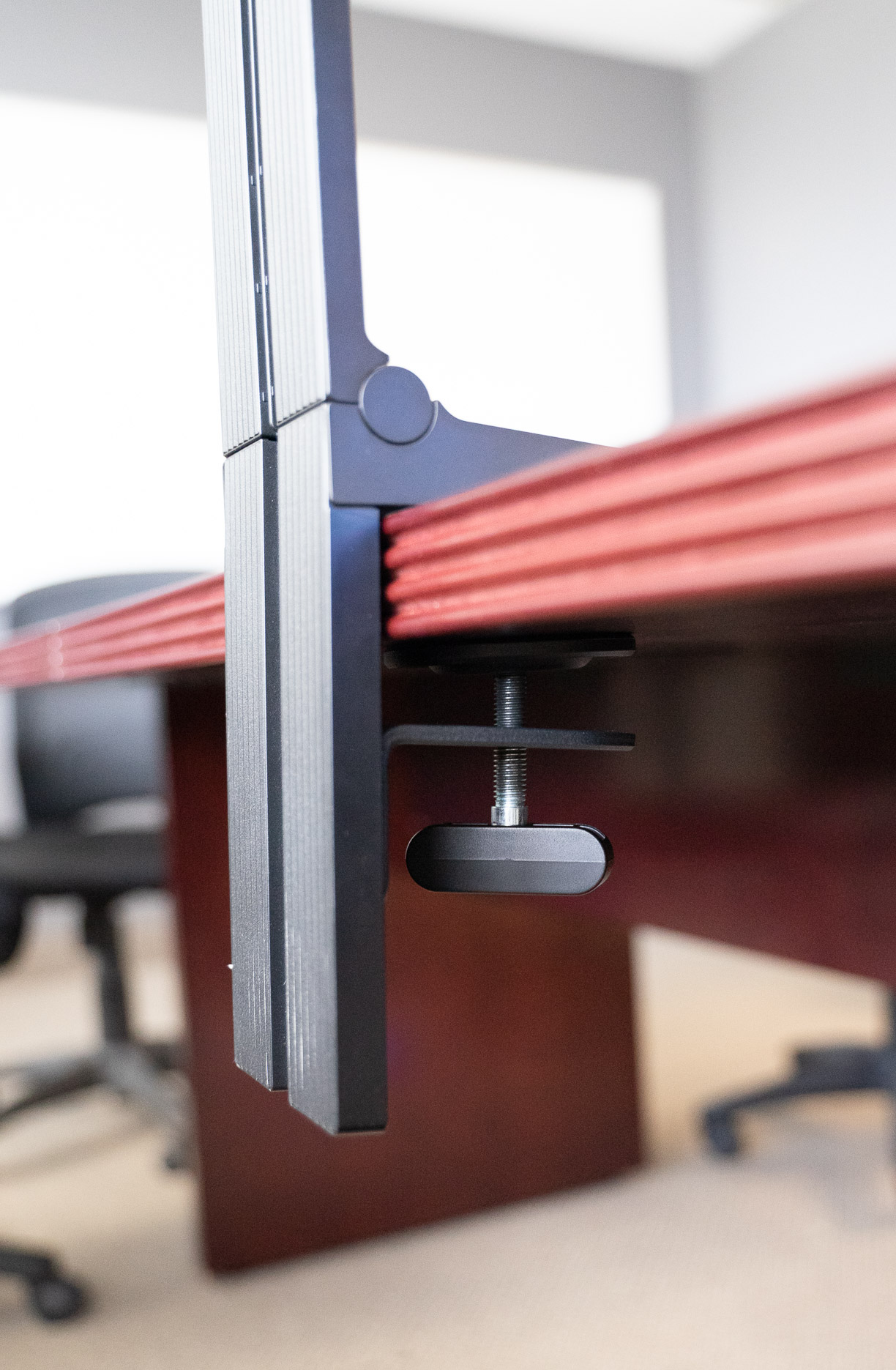 What you gain in desk space, however, you sacrifice in range of motion. Given the monitor’s incredibly thin bezels, it’s natural for one to assume that it’d be ideal for multi-monitor setups. That’s unfortunately not the case as the hinge can only pivot vertically, prohibiting the user from angling the display to cover her peripheral vision. In addition, the stand does not rotate, meaning that you can’t orientate it in portrait mode for viewing documents. There’s no elevation option either, so if the monitor needs to be moved down, it must also be moved closer to you.

If you want to swap out the stand for a traditional monitor arm, then you’ll run into the Space Monitor’s greatest detriment: it’s not VESA mount compatible. This means that you’re stuck with Samsung’s stand and can’t wall mount it later down the road.

Given its prestigious name, I was expecting a Quantum Dot panel, but was instead greeted with a vertical alignment (VA) panel.

Vertical alignment panels are considered to be the middle ground between twisting nematic (TN) and in-plane switching (IPS) panels. It can deliver greater contrast than TN panels for lower cost than IPS. Historically, it has also supported higher refresh rates than IPS, although IPS monitor technology advancement in recent years has reached parity in this regard.

The viewing angle of the monitor doesn’t impress. Colors began to deteriorate at around 150 degrees. This may cause trouble if for a multi-monitor setups as the stand can’t be swiveled, and forces the user to view the secondary monitors at an off-angle. 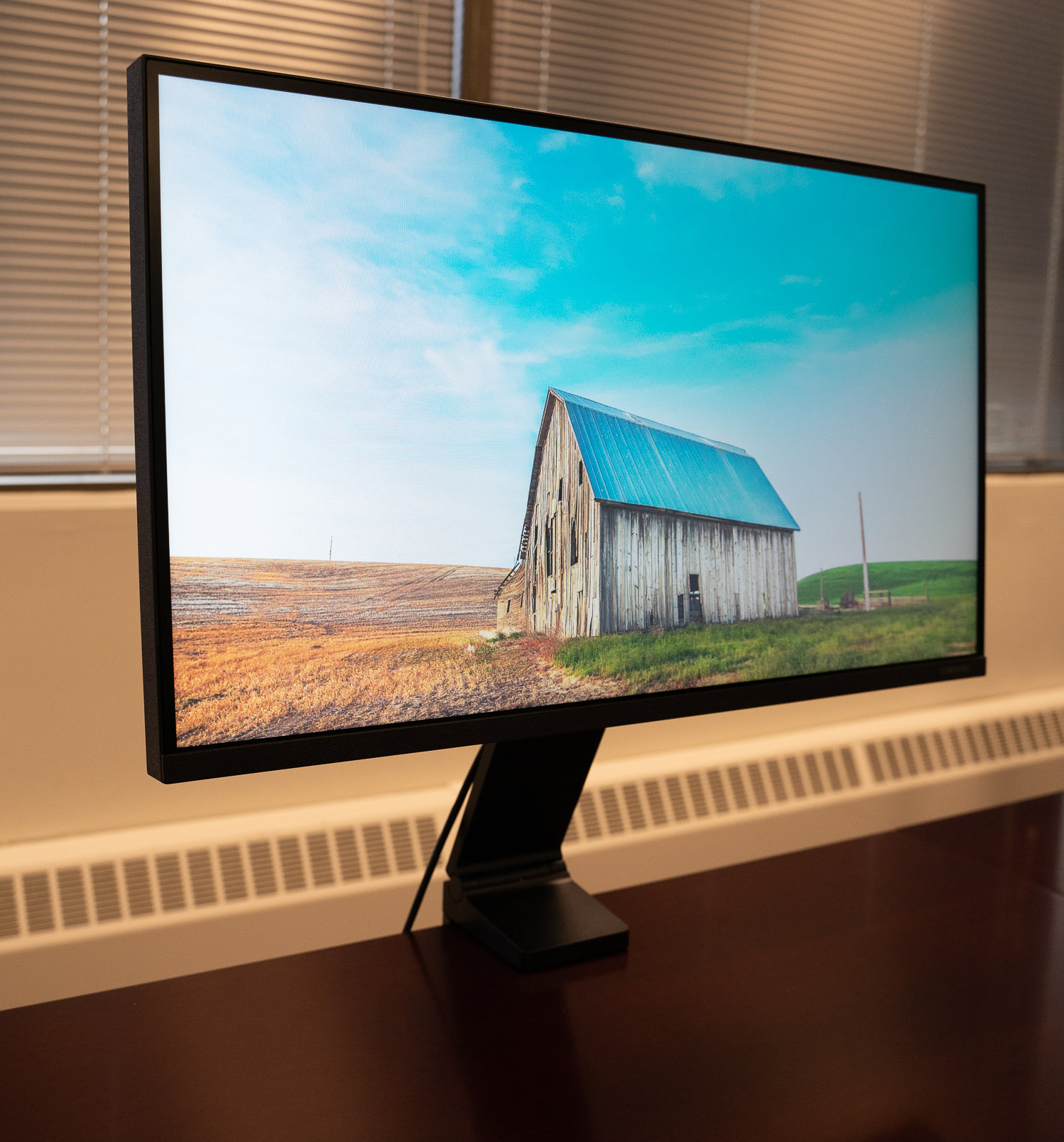 High contrast is critical for immersion as it determines the sharpness of the shapes you see on screen. Because the liquid crystal arrangement in VA panels is efficient at blocking out blacklight in black scenes, the Space monitor is able to hit a 3,000:1 contrast ratio. As expected, it performed admirably in real-world use, providing sharp contrast that helps make photos and videos appear more three-dimensional.

Despite its high contrast, its mediocre 250cd/m2 average brightness is enough to persevere against overhead office lights, but gets drowned out by direct sunlight. We recommend facing it away from an open window.

One aspect that makes the smaller 27-inch model so attractive is its 144Hz refresh rate. Whereas you’d get 4K resolution by buying the 32-inch model, its refresh rate is capped at just 60Hz. Having a higher refresh rate means more fluid animations and better gaming experience. This doesn’t matter much for mundane office chores, but it definitely does make the experience better when you’re kicking back with a videogame.

All of the monitor settings can be accessed through the slightly archaic but organized control panel. Since there’s only a single joystick for navigation, there’s no fumbling and second-guessing as to which button to press. 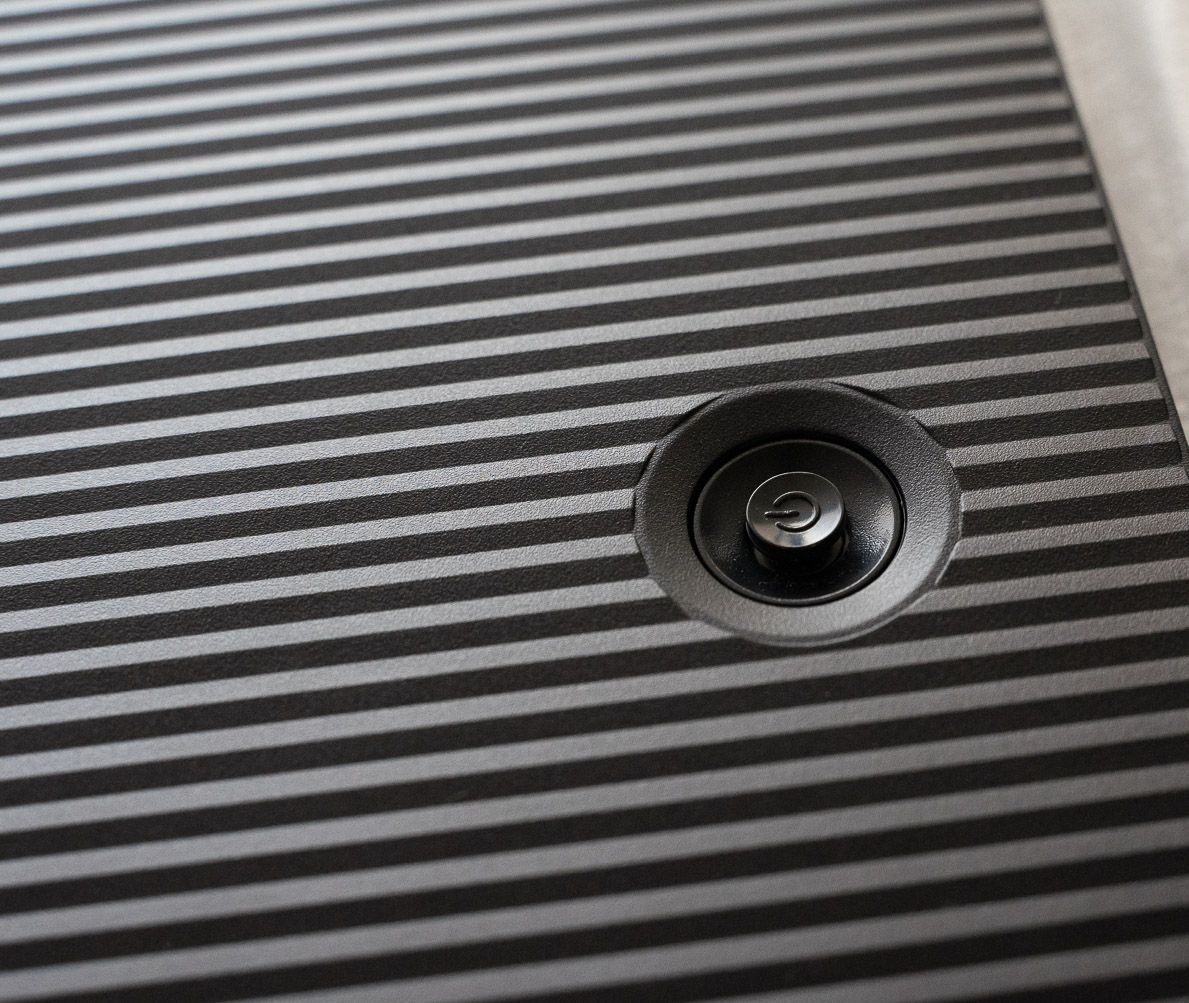 The Samsung Space Monitor supports Picture-in-Picture (PiP) mode, which splashes a stream from its second input source onto the monitor. The display size can be adjusted to take up 25 per cent or 50 per cent of the display area through the monitor’s control panel.

Because it needs to be configured using the joystick at the back, managing it is tedious relative to the PiP modes in smartphones. And since it’s from an external device, I don’t really see much use for it besides monitoring a smartphone.

Going for CA$448 on Amazon, the 27-inch space monitor sits directly on the median price range for a quality 27-inch 1440p display.

Given its solid performance, this price is reasonable. While its excellent contrast and color gamut coverage make it suitable for photo editing and office work, its 144Hz refresh rate is also appealing to gamers. Viewing angle and the brightness could be improved, but the former is unlikely an issue since you won’t be viewing it off-angle and the latter is easily solved by moving away from a window.

The Space Monitor’s marquee feature–the stand–is also where its compromises lie. Giving credits to where it’s due, the ultra-smooth hinge can firmly hold the monitor in any position without any trouble. And by clamping onto the edge of the desk, it also revives a portion of desk space previously reserved for a foot stand. Unfortunately, we find the range of motion of the free-floating stand to be too restrictive and hinders multi-monitor setups, which many professionals use today. Perhaps more pressing is that it’s not VESA mount compatible so you won’t be able to get an aftermarket stand for it.

Tom Li
Telecommunication and consumer hardware are Tom's main beats at IT Business. He loves to talk about Canada's network infrastructure, semiconductor products, and of course, anything hot and new in the consumer technology space. You'll also occasionally see his name appended to articles on cloud, security, and SaaS-related news. If you're ever up for a lengthy discussion about the nuances of each of the above sectors or have an upcoming product that people will love, feel free to drop him a line at [email protected]
Previous article
Stop being proud of complexity, says ServiceNow’s VP of innovation
Next article
Hashtag Trending – Apple responds to iPhone fiasco; urgent Windows 10 security patch; Send Google reminders to other people