Research in Motion’s second quarter earnings beat the Street on Thursday but not by enough to quell pessimism about the company’s longterm future.

The Waterloo, Ont. maker of BlackBerry smartphones and PlayBook tabletsposted a Q2 fiscal 2013 loss of $235 million or 45 cents per share (27cents a share excluding one-time items). That topped Wall Streetestimates of a 46-cent per share loss.

The company also increased its cash stockpile by $100 million duringthe quarter to a total of $2.3 billion. 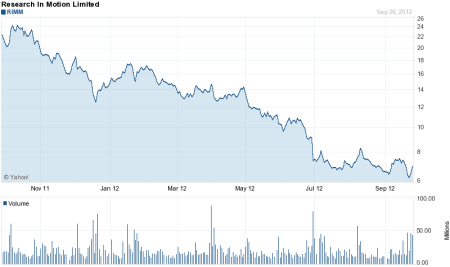 A one-year chart of RIM’s stockperformance tells the tell of the company’s slide in the past 12months. (Image: Yahoo Finance).

Yet overshadowing those tidbits of good news are worries aboutcompetitive pressure from Apple and Android devices, the delay inreleasing the new BlackBerry 10 operating system (it will debut earlyin 2013 after being postponed), and the fact that the bulk ofBlackBerry subscriber growth is coming from emerging markets wheremargins are slimmer. RIM’s Q2 revenues posted today were $2.8 billion,a 30 per centtumble from revenues of $4.2 billion in Q2 of fiscal 2012.

During an analyst conference call, Heins fielded several questionsabout the impact of various factors on RIM’s average revenue per user(ARPU), including the expiry of existing BlackBerry subscribercontracts, the churn rate that sees BlackBerry users migrate tocompetitors’ handsets, and the lower revenues generated in emergingmarkets like some parts of Africa or Asia-Pacific, where RIM is seeingthe most subscriber growth.

“The (new subscriber) growth comes very much from South Africa, AsiaPacific, Indonesia specifically and a lot of uptick in the Philippines,” Heins said during the call. “But these are real new customers we’re signing up, not churn.”
In the news release stating RIM’s Q2 financial results, Heinsreiterated that the BB10 OS will launch as planned in the firstcalendar quarter of 2013. Asked during the analyst call how RIM willcapture the attention of consumers when BB10 finally makes its debut,Heins said the company must expand its focus beyond enterpriseand cater to consumers driving the bring your own device (BYOD) trend.

“I think there will be a lot of elements in BB10 that will excite theconsumer,” Heins said. “We need (to do) this in order to attract theconsumer in the enterprise.” He added that initial response fromcarriers and partners to BB10 and its features has been positive,boosting his confidence that BB10 will appeal to consumers in a bigway.

RIM statedin the earnings release that it expects to post a Q3 operating loss andface continued pressure on its operating results for the rest of itsfiscal year due to “the increasingcompetitive environment, lower handset volumes, increased marketingexpense associated with the launch of BlackBerry 10, and some impactfrom pressure by customers to reduce RIM’s monthly infrastructureaccess fees.”

Heins acknowledged that the onslaught of new devices launched bycompetitors during the upcoming holiday season will put even morepressure on RIM, especially since the marketing campaign for BB10 won’treally gear up until the holidays are over.

“The market is going to get tougher and even more challenging with newproducts hitting the market,“ Heins said, adding later in the call: “Wewill see some pressures on Q3 but we are confident we can managethrough that.”

Christine Wonghttp://www.itbusiness.ca
Christine Wong has been an on-air reporter for a national daily show on Rogers TV and at High Tech TV, a weekly news magazine on CTV's Ottawa affiliate. She was also an associate producer at Report On Business Television (now called BNN) and CBC's The Hour With George Stroumboulopoulos. As an associate producer at Slice TV, she helped launch two national daily talk shows, The Mom Show and Three Takes. Recently, she was a Staff Writer at ITBusiness.ca and is now a freelance contributor.
Previous article
Creating mobile security policy? Remember ‘I love you,’ Kaspersky says
Next article
Sequentia puts the Squeeze on content marketing

Microsoft growth continues to be driven by cloud services in Q1

Microsoft exceeds $100 billion in revenue for first time ever

HPE begins 2018 with a strong start