Many Canadians only heard of small, Ottawa-based QNX Software Systems for the first time when it was acquired by Research in Motion (RIM). It would be an important part of the struggling mobile phone maker’s bid to modernize its product line and compete with the likes of Apple’s iPhone and Google’s growing stable of Android phones.

QNX is the software behind RIM’s first tablet effort, the BlackBerry Playbook. It will also be featured on a new line of BlackBerry smartphones due out in the latter half of 2012. But few realize the software is already powering millions of mobile devices around the world, says Andy Gryc, senior product marketing manager for QNX.

“I often have discussions where people are surprised to hear we’re actually in stuff and not just some startup that RIM acquired,” he says. QNX’s Neutrino RTOS software is embedded in more than 20 million vehicles already, including cars from auto makers Audi, BMW, and Jaguar. 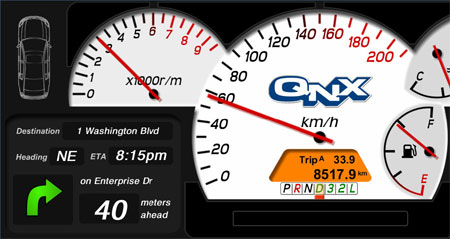 An example of a QNX dynamic dashboard display.

“Any big name you can think of, we generally have software in some of their vehicles. It’s a good touch point for us to connect with customers,” Gryc says.  “Aside from stuff like nuclear power plants where people don’t have a lot of accessibility, but you definitely have that with your cars.”

QNX’s install base in cars hasn’t been trumpeted by RIM, a company that has faced tough media scrutiny over the past year and has seen its stock price plummet from more than $60 at the beginning of 2011 to a mere $13.71 before markets opened Dec. 16. After suffering a service outage and missing sales expectations in the past weeks, RIM in its thid quarter briefing to investors said its QNX-based smartphones would be delayed until later in 2012. Co-CEOs Mike Lazaridis and Jim Balsillie took a pay cut to $1 annually as contrition.

Related Story | BlackBerry’s apology: the free apps you can download

QNX has been making embedded automotive software for more than a decade, writing the ‘under the hood’ code that provides drivers with entertainment features. With in-car IT systems becoming increasingly complex as consumers expect modern features like Internet radio access, in-dash GPS navigation, and hands-free calling, car operating systems are only now coming to the forefront of automotive competition.

As the software has graduated from a couple of lines of code for remembering radio station pre-sets to thousands of lines to facilitate a touch-screen enabled, graphically rich user interface, car makers are turning to companies like QNX for help. Where QNX first developed its software for cars and is now creating mobile device platforms, other software firms with experience in making mobile software are now focusing on the automotive sector.

“I view the automobile as the ultimate mobile device,” says Thilo Koslowski, vice-president of automotive for analyst firm Gartner Inc. With more than 50 million new vehicles produced worldwide a year and growing, cars are a computing platform that’s hard to ignore.

“Many of these vehicles will be connected in some way, shape, or form,” he says. More mature automotive markets such as North America now expect Web access as key criteria when considering what new car to buy.

One of the operating systems competing with QNX to power those features is Microsoft Corp.’s Windows Embedded Automotive 7. Released Oct. 19, 2010 at Detroit’s SAE Convergence in Detroit, its key features include receiving speech commands, touchscreen input support, Bluetooth connections to mobile phones, and a dashboard display capable of displaying maps or other apps, powered by Microsoft’s rich Silverlight graphics technology.

Cars fall under Microsoft Corp.’s embedded systems group, first formed in 1996. As the company sees its non-PC devices become connected in the “Internet of things” it is exploring benefits from having devices able to communicate, said Kevin Dallas, the general manager for Windows Embedded at Microsoft,  at the company’s Executive Summit this year. Take for example being able to control your car’s entertainment system with your Windows Phone.

Ford Motors Co. has relied on Windows Embedded since building the first generation of Sync, its in-vehicle infotainment and connectivity system, in October 2007. Ford had an enterprise relationship with Microsoft already, says Jim Buczkowski, so it made sense to work with them on a car OS.

The two firms started working together to create Sync and MyFord Touch in 2005, when iPods and a slew of other digital music players were hitting the market. Consumers were starting to demand that those devices would work in their cars, and Ford ran with the trend.

“We knew things would change quickly over time, driven by the consumer electronics market,” Buczkowski says. “Rather than have a one-off embedded design, we felt we needed a platform to build on.”

By working with Microsoft to create a sophisticated OS, Ford left room to future-proof its in-car IT systems. Thus far, the auto maker has built a media player, phone connectivity, voice recognition with natural language, a navigation system, and more – all running on the embedded Windows platform. Its MyFord Touch and Sync features will be included across more vehicles for 2012, he says.

Microsoft builds many of the applications for Ford, based on design specifications laid out by Ford engineers. For QNX, there is a different relationship for each of the auto makers it works with to develop software – including Honda, and General Motors. Typically, the auto makers send out their specs to OEMs to manufacture for them, and QNX has works with those OEMs to customize its software as required.

“Every OEM wants a different look and feel, and have different things they want as brand differentiators,” Gryc says. “Some focus on speed, others want the best graphics.”

Microsoft and RIM aren’t the only two companies creating software to run mobile phones and motor vehicles. Google’s Android OS was tapped by Mercedes to run a Web browser and apps on its AMG SLS and SLS Roadster 2012 models. It’s like Android will make its way into more cars in the near future, Gartner’s Koslowski says. It follows the trend of smartphone makers looking to extend the software you use on your phone to your car, too.

“It’s too early to say who is winning,” he says. “There are some companies that are more present today, and certainly Microsoft is one of them, but so is QNX.”

When drivers of new cars step behind the wheel, they may find they recognize the system powering their dashboard as the same core software that powers their BlackBerry.