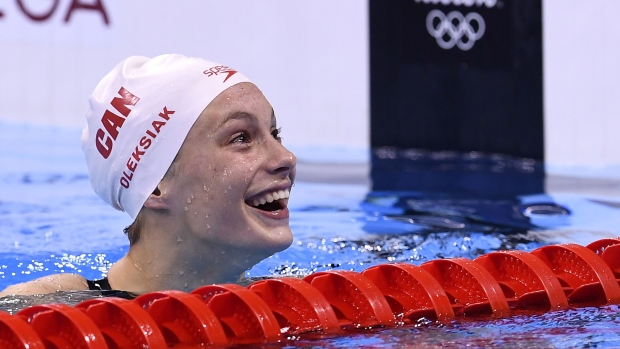 A few weeks ago, Penny Oleksiak was still an unknown Olympic hopeful. Fast forward to today and the four-time medallist is hailed as a Canadian hero.

After becoming the most decorated Canadian swimmer in a single Olympic games, the young athlete’s popularity and recognition has exploded on social media. We used our athlete social media ranking system to look at another young Canadian superstar last week, and now we’ll use it to see how Oleksiak’s newfound fame has transferred to social media.

Oleksiak lost a few points here because she hasn’t been extremely active on Twitter, limiting her interaction with fans. Fame is a whole new world for Oleksiak, and with time, she will probably learn how to better engage with supporters online.

Oleksiak did hold a Twitter Q and A through Buzzfeed, which received lots of positive attention from fans.

"This summer I went to Rio got a few medals and had a great time" https://t.co/edS8CrrkLp

While Oleksiak is technically the fan in this situation, her online interaction with Drake has caught tons of attention online. Everyone loves to see someone meet their idol, and that’s exactly what could happen for Oleksiak this fall.

For this section, we look at how effectively an athlete is using photos and videos on their social media channels. Oleksiak received a solid 9/10 for some interesting videos and Canadian-themed photos.

For the popularity measure, we consider the number of followers an athlete has as well as how they are generally regarded by the online public. A perfect score here was inevitable, as Oleksiak’s popularity has increased exponentially since her multiple medal-winning performance at the games.

In addition to gaining 10s of thousands of Twitter and Instagram followers, Oleksiak has been praised by Canadians all over for her success and kind actions.

Penny shares her medal with Michelle for this interview. Total class – what a team. @SwimmingCanada pic.twitter.com/giwZxkQnu5

Oleksiak scored perfect in this section as it was nearly impossible to spot brand advertisements in her personal posts. Since Rio was her first taste of major international success, it’s probable that endorsements are only starting to pour in for Oleksiak. Additionally, if Oleksiak wants to maintain her amateur status to be eligible to compete in the NCAA, she won’t be able to begin endorsing brands until after she’s completed university.

While we might one day see her feed flooded with product placement, it remains nearly pristine for the time being.

A 35/40 is a very respectable score for the 16-year-old phenomenon. With most Canadians hoping to see Oleksiak again in 2020, she has an opportunity to step up her game both in the pool as well as on the Internet.

Jackie Atkins
Jackie Atkins is a competitive alpine skier, student and aspiring writer who primarily contributes stories about the intersection between technology and sports to ITBusiness.ca.
Previous article
Less than 1% of enterprises running Windows 10: Softchoice
Next article
Kobo’s new Aura One e-reader inspired by its best customers

Cybersecurity risks added to list of growing problems in Rio