Paper, plastic, or Apple Pay: should you support the mobile payments option?

That’s how big Apple’s latest iPhone launch has been so far, with both the iPhone 6 and 6 Plus flying off store shelves, often briskly outpacing demand. The hype levels matched or surpassed previous big Apple product launches with reports of some eager enough to line up two full nights ahead of the launch.

Both Apple’s pre-orders for the iPhone 6 and the first weekend of sales are record-breakers for the company and that’s a big deal. But the iPhone 6 isn’t the only announcement Apple made at its Sept. 9 event in California. No, I’m not talking about the free U2 album download that showed up in your iTunes account – I’m talking about Apple Pay, the service that is going to turn iPhones into digital wallets.

Apple Pay is a way for iPhone users to safely embed their credit card information on their smartphones and then use it to complete a purchase at a checkout that supports tap-to-pay. The service will be integrated into the existing PassBook app, which is already used today to store loyalty program cards, airplane boarding passes, and tickets. Not only will Apple Pay be available for the iPhone, it will also be supported on the Apple Watch due for release early next year. Plus it will be integrated into in-app payments on iOS, so its useful for e-commerce too.

With 10 million consumers already carrying an iPhone 6 in their pocket, Apple Pay could be a game-changer for mobile payments whether they are being made in checkout lines or in mobile apps. Merchants might ask themselves: is this something we should be looking to support at checkout? If so, how can we get ready for it?

Let’s take a look at what we know about Apple Pay to date and how it affects you.

How does it work?

Consumers that want to pay with their iPhone 6 will authenticate their credit card information using the PassBook app. They have the option of taking a photo of their card or typing in the information on the iPhone and the card is then authorized with their bank for use with Apple Pay.

Now that it’s stored on the iPhone, customers are ready to complete a checkout at a POS terminal that supports near field communications (NFC) or “tap-to-pay” functionality, such as MasterCard’s MasterPass or Visa’s PayWave. At checkout, the customer opens their PassBook and indicates they are ready to make a payment. They simply touch the top of the iPhone to the payment terminal while placing their finger on Apple’s Touch ID sensor to authenticate their identity.

When making a purchase in-app, of course there’s no terminal to tap. A customer will simply put their finger on the Touch ID sensor to complete the transaction. An app might present a payment sheet that looks something like this: 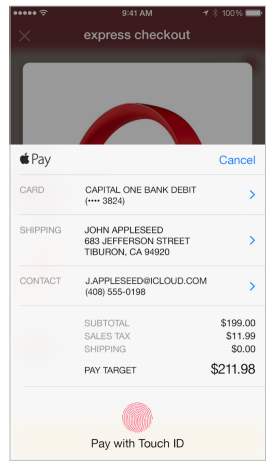 From there, what happens is all behind the scenes. 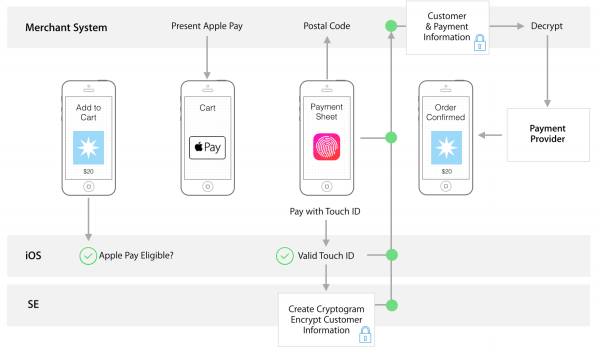 The customer’s credit card information isn’t actually stored on the device. Rather, an encrypted unique identifier is stored on a special Secure Element that is separate from the rest of the phone’s circuitry. When a payment is being made, a payment token specific to that purchase is created to send to both the merchant and the payment processor. Your private key is used to decrypt the payment information and authorize the transfer of funds.

Apple Pay can do more than just purchase transactions. Apple explains all the transaction types that can be supported with its new platform in this handy table:

How do I support it?

First of all you’ll need a point of sales (POS) system that supports contactless payments. If you can already accept payments from tap-to-pay style credit cards, you can check this requirement off you list.

Next your payments processor will need to support Apple Pay. Apple says it is on board with most popular payment solution providers and many will be announcing plans to support Apple Pay soon. There are several you can start working with right away, including:

Supporting Apple Pay in your app will require a couple more steps, especially if you develop your app in-house. You’ll need to register a merchant identifier with Apple via your developer account and then submit for a certificate signing request that will allow you to encrypt and decrypt the payment tokens used in transactions. Developers will also need to follow Apple’s human interface design guidelines.

It may be worth noting that if you use an iPad for your POS today, it won’t be Apple Pay compatible without the right peripherals. Although both are made by Apple, there’s currently no iPad models on the market that include a NFC reader.

Is it worth supporting and advertising?

Apple Pay will be launched in the U.S. in October, at which point an update pushed to iPhone 6 and 6 Plus devices will include the new feature. It’s not clear when Apple Pay will be coming to Canada and other international locations.

While Apple has announced partnerships with U.S. banks such as Bank of America, Capital One, and Wells Fargo, but it hasn’t named any banks in Canada or other countries that will support it. So if you’re not in the U.S., Apple Pay isn’t really a going concern right now.

Conversely, the U.S. lags behind many other countries when it comes to merchants supporting contactless payments. That’s why Gartner Inc. predicted that money transfers and in-app purchases would be a more popular use of mobile payments compared to using a device at a physical checkout.

Gartner’s most recent report on the mobile payments industry pegged it at a value of $235.4 billion by the end of 2013. It’s predicted that will grow by 35 per cent in terms of both value and volume by 2017, but NFC-enabled payments such as Apple Pay won’t be taking a very big piece of that pie. In fact, Gartner cut its projection of NFC transactions by 40 per cent.

When you consider that NFC-enabled solutions have been on the market since 2012 on Android and BlackBerry smartphones and are yet to take off in usage, you have to wonder if Apple can really change the way people want to pay in stores. But this is one technology vendor that’s had a way of executing older ideas in a user-friendly way in the past and its products often spark changes in consumer behaviour.

How much will it cost?

At the end of the day, only U.S. merchants need really consider supporting Apple Pay at the moment. Even then, the potential user base is only as big as those who own the newest iPhone models – iPhones released last year and before that aren’t able to use Apple Pay. So if you don’t have it, it’s very unlikely you’ll actually miss out on a sale you would have made otherwise.

On the other hand, iPhone 6 users might be excited to try the new payments system and if you advertise support for it, it could even be a reason for shoppers to show up at your door. Plus, you’ll be ready to grow with the user base as more Apple Pay devices enter the market.

Brian Jacksonhttp://www.itbusiness.ca
Editorial director of IT World Canada. Covering technology as it applies to business users. Multiple COPA award winner and now judge. Paddles a canoe as much as possible.
Previous article
3 in 10 Canadians not protecting themselves online, survey finds
Next article
Bing over Google? A Q&A with Andrew Yang of Bing