Orlando Magic banks on data analytics on and off the court

ORLANDO – Don’t mistake the Orlando Magic’s woes on the court with the successes the organization has had behind the scenes.

Take a look at the Magic’s franchise. Bottom of the standings for years. No superstar. Medium-sized market (19th largest market in the NBA). Yet, for the third year in a row, the Magic top Turnkey Intelligence’s Annual Sports Data Systems Study – the organization was voted the most sophisticated in regards to CRM/data base management by 29 per cent of those surveyed.

The NBA as a whole leads the sports industry in data analytic practices, and despite a losing record and no franchise superstar, the Magic are constantly recognized as the one leading the charge. 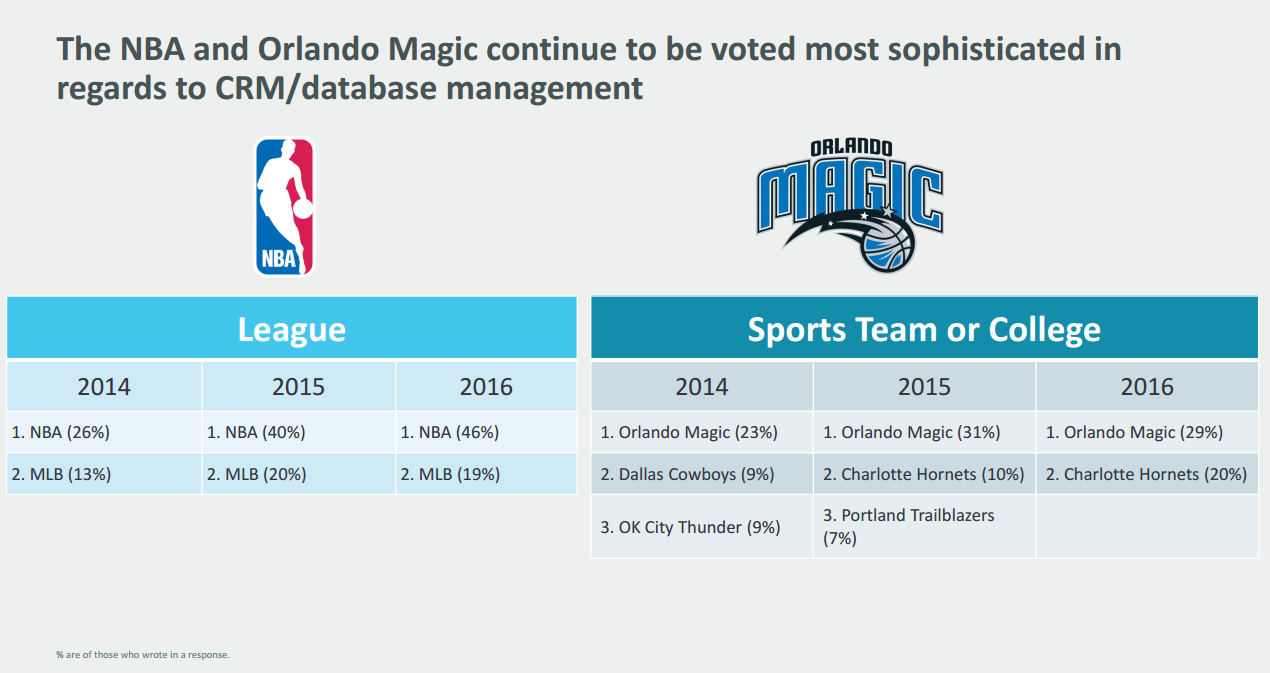 It all started in 2010 when the organization was looking for a way to drive ticket sales in the new Amway Center. That’s when the Magic began introducing variable pricing – meaning they would now begin charging different prices for the same seat depending on who the Magic were facing. So if the Golden State Warriors are in town, that seat will be more expensive.

But if it started with driving ticket sales, it didn’t stay that way.

“We encountered SAS almost by accident,” said Anthony Perez, Orlando Magic executive vice president of strategy at the 2017 SAS Global Forum. “SAS Talked to us about a broader vision other than just driving ticket sales.”

And the Magic ended up needing that broader vision. This year will be the Magic’s fifth straight year without making the playoffs, and without a superstar on the team to market around, the team was forced to get creative.

It’s a position that can be deadly for mid-market teams in cities like Orlando – finding reasons for fans to care if the team isn’t successful. So the team began innovating.

“Innovation is a priority for the organization. I think we’ve done a really good job in the space of sports. Being innovative is certainly helping with our [mobile] app. We were the first team to have that type of huge overhaul on our app and engage in the fan experience to those extremes. Our record each seasons gave us the opportunity to innovate and figure out engaging ways for the fans to be involved,” said Perez

And he means it. Whether it’s upgrading seats, skipping the line at concession stands, meeting the mascot, or getting into the team’s post-game press conference, the app elevates the fan experience to another level.

“We have really taken a mobile first approach with the fan experience. Anything you can do at a Magic game can be done through our app,” said Perez.

With SAS on board, Perez and his team realized they could use analytics for much more than just ticket sales. Early into the relationship, the team found multiple areas that could be improved that they would never have thought of otherwise without the SAS Analytics and SAS Data Management platforms. Areas like inventory optimization and fan demographics became part of the day to day analysis of the data the team was collecting.

To some, using analytics technology seems like the obvious move, but taking into the mentality of business in sports leagues is important. So many decisions in leagues like the NBA were made by guys who have been in the sport for years using their gut to make calls. Analytics challenges that mentality, and that’s still a conflict in 2017.

Ultimately, what’s significant about the Magic’s move to analytics, is that they’ve led the charge in not only the NBA, but the four big leagues across North America as well.

“We’ve proved that how many wins and losses you have as a team doesn’t prove your fate,” said Perez. “We’ve proved we can be successful despite not the most ideal record.”

Alex Raduhttp://www.computerdealernews.com
is a Video Producer for IT World Canada. When not writing or making videos about the tech industry, you can find him reading, watching TV/movies, or watching the Lakers rebuild with one eye open.
Previous article
Vancouver airport launches self-serve kiosks to meet new border clearance program
Next article
Bell still on top, but complaints against telecoms continue to drop, CCTS finds