Markham, Ont. based CognoVision Solutions Inc. has been named Canada’s 2009 Innovation Leader for its face-detection and people-tracking technology that provides retail audience measurement.

CognoVision was selected as the winner from among the Top 20 innovative companies named last month by the Canadian Innovation Exchange (CIX).

The Markham firm received the award at a CIX function Wednesday night in Toronto.

CognoVision uses small optical sensors to detect when shoppers are looking at specific advertisements, and how they chart a path through stores. The technology was showcased Wednesday, at the CIX event, during a presentation by Haroon Mirza, director of business development at CognoVision. 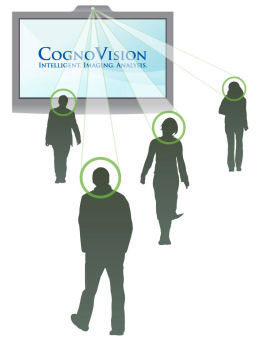 If the firm had been using its face detection technology on the crowd, it would have measured some awed reactions.

“The presentation was well thought out, concise, and hit all the high notes,” Montgomery says. “When they showed the hot spots you find in a retail environment, based on imagery, people’s jaws dropped.”

It merely translates the image into binary data and recognizes the pattern of a human face. It measures how long that face looks at the advertisement, where it is looking, whether it is likely to be a man or a woman, and the person’s approximate age.

No images are ever recorded, Mirza explains. The company is very careful to maintain privacy.

Mirza offered an analogy to illustrate the point

“If it were like Minority Report, it would know that I, Haroon, entered the room and what to pitch to me as a result,” he says. “But we’re more like a turnstile that counts the number of people entering the room.”

A similar application of the technology measures how many people enter a store and how they navigate through it. Software sitting on a server compares an empty store to what it’s seeing in real-time and detects the pattern of a person moving through it.

Small log files are created of the activity and uploaded to the server.

Retail managers can then view the analytics front-end of the software to understand — not just how many people are entering their store — but how many of them are being converted into customers.

“This is the major difference,” Mirza says. “When a store manager knows they will be accountable for converting people who come through the door, they’re incented to go and help customers whenever they can.”

“It just shows the power of data,” he says.

The product has been adopted in the field by several companies since it hit the market in February 2008. Customers include the Air Canada Centre, Movado Group and its luxury brand of watches Concord, as well as The Marketplace Station found inside select Whole Foods Market locations.

Mirza said CognoVision, which will be making forays into global markets, is thrilled its technology has been recognized by the CIX award.

It’s great, because selling internationally, it brings a sense of credibility to the table,” Mirza says.

Aeryon Labs was recognized for Aeryon Scout — a hovering, unmanned flying vehicle that can record digital images and video.

About the size of a lawnmower, the four-rotor device with a gimble-attached camera can be controlled with a simple touch screen remote control. 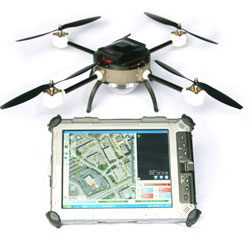 The idea is any police officer or solider could pick up the device and start using it with only minimal training, says Dave Kroetsh, president of Aeryon Labs. The company has a vision that its product will soon be in “the backpack of every soldier and the trunk of every police car.”

The touch screen interface is similar to Google Maps, Kroetsh says. Users simply tap where they want the drone to fly and it will do so in real-time, or on a planned flight path through a series of waypoints.

As many of the unit’s components are automated, the operator doesn’t need to be worried about detailed control of the system, Kroetsh says. “You’re not worried about the wind, or what’s going on up there.”

On the market since July, each drone costs between $50,000 and $75,000 depending on how it’s outfitted. It is already being used in the field by military and police departments in Canada and abroad.

Skymeter describes itself as a “financial grade GPS” on its Web site. The metering technology is installed in cars and can be used to charge road tolls. In the City of Winnipeg, it is now being used to charge some residents for parking instead of feeding coins to a meter.

CIX aims to connect start-up companies with potential investors. Now in it’s second year, it is gaining recognition as an industry event that brings together companies in need of capital with the people who can provide it.

The Toronto Stock Exchange was also on hand this year to add to its listing, Montgomery says.

“It’s a huge catalyst for all the top 20 companies, not just the winners,” he says. “They got to highlight what they are doing and increase awareness.”

CognoVision is open to investors, Mirza says. Though the firm is privately funded and doesn’t necessarily need funding.

“We’re open to a partner who can speed our time to market,” he says. “We certainly hope that’s one of the benefits we’ll be able to realize.”