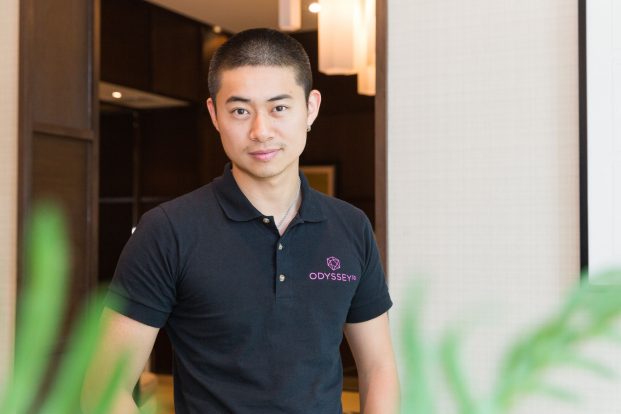 Inspired by the disconnect between the way properties were displayed in photos online and how they looked in person, Jimmy Chan founded Odyssey3D, a startup which works with emerging technologies like virtual reality to help realtors translate reality into the digital environment.

Jimmy Chan learned a lot about clever lighting and camera tricks while looking online for property to buy then visiting the places with his real estate agent. “The moment we stepped foot through those doors I got really disappointed,” recalls Chan. “All the information I’d found online didn’t properly represent the house I was there to see.”

It was a fundamental disconnect, a problem he repeated ad nauseam throughout the house hunting process. Then, while Chan was on a month-long tour of Israel’s startup scene with York University’s Schulich School of Business, it clicked: “A photo can’t capture everything,” he says. But maybe technology could be leveraged to create immersive, 3D virtual open houses.

Chan brought the idea for Odyssey3D back to Toronto with him and after six months of research talking to over 500 home buyers, sellers and realtors, he felt he was onto something. In 2016 the startup joined the BEST Lab, a technology startup incubator at the Bergeron Centre for Engineering Excellence at York University.

“I made a promise to myself: if I can make a penny off this by the time I graduate, I’m just not going to find a job and I’ll do this full-time,” he says. He pitched at Schulich Startup Night and won, bringing on Kaushik Satish as a co-founder.

But the startup’s first break came when they started a formal collaboration with Re/Max Realtron Realty in the summer of 2017. “They’re the highest producing Re/Max brokerage in North America by volume,” says Chan. By the fall they started meeting some of Toronto’s most successful realtors – including Barry Cohen and Bill Thom – working with them to develop customized virtual open house experiences.

“Toronto real estate is amazing,” says the Odyssey3D co-founder. “I don’t think anywhere else in the world is like Toronto in terms of the real estate market here.”

He points out that the real estate boom has inspired lots of people to try their hand at selling properties. The downside is it can be a saturated market where it’s hard to stand out amongst other realtors.

Odyssey3D looks to give them a technology-augmented edge. “Everyone is trying to stand out and do something different.”

The company has since joined York University’s YSpace innovation hub in Markham. Between that and the BEST Lab, Chan feels like he’s in the right frame of mind to grow the business.

“I’ve been through a lot of different incubators and startup programs around the city, and I think hands down the BEST Lab provides the most organic and natural experience,” he says. “It’s our secret weapon for why we’re still here and operating after two years.”