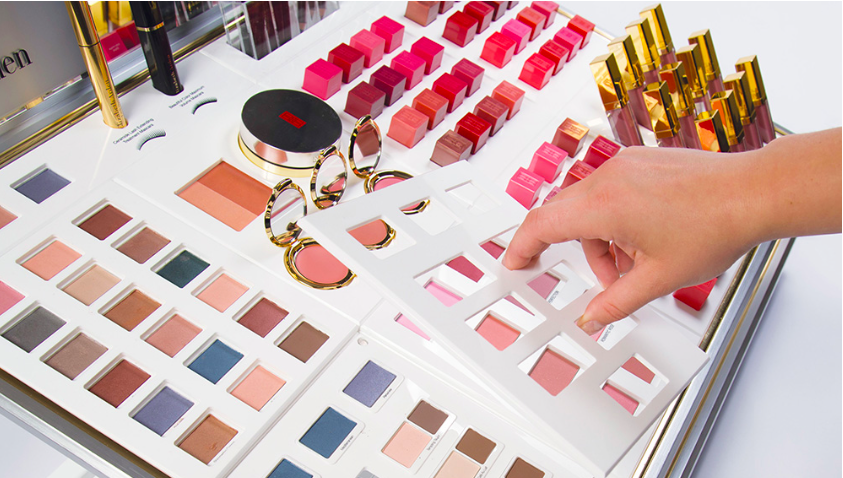 Two Canadian companies are teaming up to bring connected packaging and smart store displays to the global cosmetics market.

London, Ont.-based Tuku Inc. has partnered with Array Marketing Inc. of Scarborough, Ont. to inject the Internet of Things into in-store makeup retailing.

Tuku president Mark Baldwin provided a sneak peek of the technology during a presentation at the Canadian Printable/Flexible/Wearable Electronics Symposium (CPES) held in Scarborough on Wednesday. ITBusiness.ca’s parent company ITWC is a media sponsor of the conference, which continues on Thursday and Friday.

As Baldwin explained, each in-store makeup display would feature an NFC tag reader and a video display screen. Certain cosmetic product samples – known as testers – would have IoT tags embedded in or printed on their actual product casing (not the outside box or other disposable packaging).

When a shopper taps the product sample against the NFC reader, the in-store display screen shows information about the product and suggests similar or complementary makeup items for purchase.

The system offers retailers both ‘push’ and ‘pull’ marketing options. The NFC tags allow them to push messaging and information about specific products to individual shoppers instantly via the in-store display screens.

At first blush, the system would appear to missing a key – and common – NFC ingredient: the smartphone. Since the product details appear on the in-store screen almost immediately after the NFC tags are tapped, however, shoppers receive that info faster than they would if searching for it on their smartphones.

“Normally the consumer may have to do five or six Google searches on their phone,” Baldwin said. “Then that (brand) connection is lost and the consumer isn’t able to get the message in a very concise, succinct manner.”

Unlike mobile search results, the NFC-enabled messages and product details come directly from the brand or retailer, so they aren’t filtered or affected by SEO or paid ad rankings.

“The goal is to really customize the brand’s message and deliver it to a really specific audience,” Baldwin said.

“We’re tracking right down to the level of a single product SKU and a single store … which is also a way of surveying the market place,” Baldwin said.

Besides giving brands and retailers insights about the sales performance of cosmetics items, the system helps them track inventory so they can stock products to meet demand.

“It gives the brand a level of insight that hasn’t previously been available, and in real time,” Baldwin said.

Using that insight, marketers can tweak the outgoing information they push out to in-store display screens about each product, based on which messaging leads to the highest conversion rates.

“We can change (outgoing) content and report on the consumer interactions in real time to learn what’s most important to consumers and what actually drives purchases,” Baldwin said. “We’re able to change, remotely, the (NFC-based marketing) content related to that SKU … according to what the data’s showing us.”

Through this customization, retailers can promote global brands at the local level. For example, Baldwin said a product coupon that’s only redeemable in a single store location can be issued and activated within an hour using the NFC display system.

“It gives the brands the opportunity to really test and see what works best in each environment and adjust the messaging accordingly, to track what the return on investment is and what sales were generated through intelligent displays.”

But smartphones for personalization

He said the ultimate goal is to add personalization to the mix. That would require shoppers to scan the product samples with their own smartphones, however. They’d also have to consent to have their personal location and payment data collected via their phone, probably by downloading an app or signing up for a mobile loyalty program.

Baldwin cited research showing that 90 per cent of all purchases are still made in physical stores and that 82 per cent of shoppers use their smartphones to make purchasing decisions inside stores.

Consumers won’t find this type of tech combo at store makeup counters just yet. Tuku and Array have developed it but are now shopping it around to international brands. While the technology obviously has retail applications beyond cosmetics, Array already has a foothold in that particular sector.

Although Array started out in 1982 manufacturing promotional swag like mugs and key chains, today it’s one of the world’s biggest designers and manufacturers of in-store displays for cosmetics and clothing retailers. Its client roster includes L’Oreal, Lancome, Chanel, Sephora and Calvin Klein.

Despite its shorter history (it was formed two years ago), startup Tuku has bagged big name clients like Honda, Toyota and Samsung. It specializes in NFC-based mobile marketing content and campaigns.

Christine Wonghttp://www.itbusiness.ca
Christine Wong has been an on-air reporter for a national daily show on Rogers TV and at High Tech TV, a weekly news magazine on CTV's Ottawa affiliate. She was also an associate producer at Report On Business Television (now called BNN) and CBC's The Hour With George Stroumboulopoulos. As an associate producer at Slice TV, she helped launch two national daily talk shows, The Mom Show and Three Takes. Recently, she was a Staff Writer at ITBusiness.ca and is now a freelance contributor.
Previous articleSamsung Gear 360 and DeX come to Canada May 26
Next articleAdhesive manufacturer 3M’s tech footprint is larger than you might think