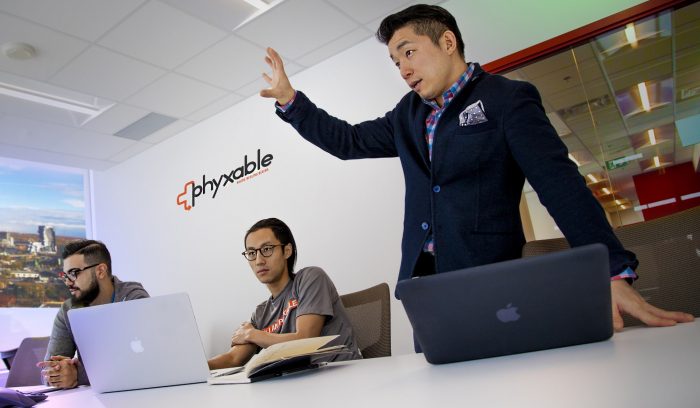 Jimmy Feng’s Phyxable is a self-help video platform to help fix and prevent injuries but how will it compete with the popular in-person physiotherapy sessions people often gravitate toward?

Cathy suffered from low back pain for more than five years to the point where it rippled into every decision in her life. She frequented physiotherapists, chiropractors and massage therapists for several years but they never gave her the assistance she needed. When she discovered the video app Phyxable she was able to work on her daily exercises, “which has reduced her pain significantly to a point where she is able to work out again without pain and enjoy the freedom of her movement without thinking twice again,” says Jimmy Feng, the co-founder and CEO of Phyxable.

Feng explains his one-year-old app aims to help those suffering from major injuries, whether those are shin splints or a bad back. At least 30 videos are available (as of this article’s writing) with 14 practitioners involved in creating videos for the platform, available for iOS and Android users.

It’s a ripe market to enter. In the U.S., the health-care spend for chronic pain reaches around $635 billion US annually.  “Too many people want to take a pill to solve their physical issues,” Feng notes. “But there are other solutions that can be great to even prevent those injuries in the first place.”

Feng also says a challenge for many physically active Canadians is the cost of physio. An entire video-solution on Phyxable costs $49, which is more affordable than a full physio solution, Feng says. “So many people drop off their physio treatments because of the expense.”

But aren’t there many videos on YouTube that offer the same thing that Phyxable provides? “Yes, but these creators aren’t creating step-by-step solutions, because Phyxable lets you progress and level-up as you go through each video,” Feng notes.

He adds that “with these kinds of videos, it’s all about trust. Sure, there is motivating stuff on YouTube but do you really know who they are?” He says Phyxable content creators, such as Canadian Beach Volleyball Olympian Josh Binstock, add a level of credibility to the platform that further entices serious athletes.

Phyxable’s home office is at YSpace, the entrepreneurship incubator from York University. “It’s a great space and people there are gung-ho and ready to change the world,” Feng says. He appreciates the latest tech at YSpace, such as the whiteboard walls, 70-inch TV in all rooms, user experience interview rooms, and the maker space.

What Feng finds fulfilling about launching Phyxable “is working with such a rock star team who are committed to our mission: helping 1 million people suffering from pain by 2025.”