Microsoft starts talking about ‘Windows as a Service’ for Windows 10

SAN FRANCISCO – Microsoft CEO Satya Nadella made a passing reference to Windows as a “service” during the opening keynote at Build, but it was fleeting and easy to miss. The references he made to “Windows as a Service” during his presentation to financial analysts didn’t skirt the subject – it’s the future of the operating system.

Every version of Windows released to date has been sold in the same way. A product is made and released by Microsoft and put on store shelves or made available to download. Consumers either pay to download the new OS and upgrade their computer, or more often than not, just buy a new PC from an OEM that has Windows pre-installed. For businesses of a certain scale, licences are acquired, images of Windows are deployed and a maintenance and support plan is put in place. 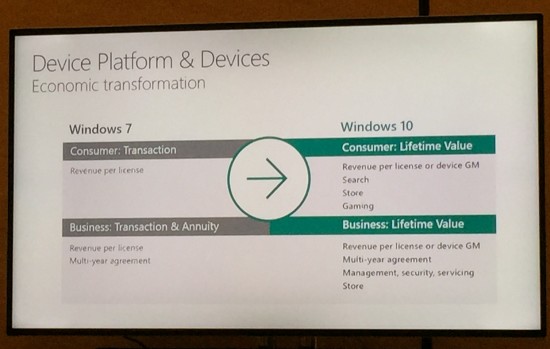 After Nadella’s setup, Kevin Turner, chief operating officer at Microsoft, hammered it home. Aided by slides with titles like “Windows as a Service” and “economic transformation” he spoke to just how big a deal this change is for Microsoft and everyone it does business with.

“Windows as a Service is a gigantic change for our customers and our partners,” he said. “Windows and the OS will always be up to date.”

Moving to a software as a service model has been popular in the software industry over the last several years. After companies like Salesforce Inc. proved that companies are interested in using enterprise-grade software that is delivered over the Internet, not installed on local servers, many other vendors changed their business models. Adobe is one example, shifting its popular software products like Photoshop and Premiere to its Creative Cloud and selling subscriptions to users instead of an install file.

SAN FRANCISCO - The first thing that Microsoft handed to me when it was time for my demo with the HoloLens was a pad of paper and a pen. They were taking away

Microsoft did the same with its Office product. While you can still buy Office as the traditional software you can install on your hard drive, Microsoft talks about its Office 365 service much more often these days. It also offers its Dynamics CRM as a cloud service.

These business models are working well for Microsoft, Nadella told analysts. There are 50 million monthly active users of Office 365 today and 7 million paid Dynamics users. In doing this, Microsoft is moving frpm one-time purchases of major software products every five to seven years to a pace of annual or monthly renewal, Nadella explained, plus there’s opportunity for Microsoft to address new markets.

“Now we are having real success with small business adopting some of the most sophisticated abilites of Office 365,” he said. “There is a significant expansion in the value we can deliver to customers.”

But a change in how Windows is delivered and maintained doesn’t necessarily mean a change in how its sold or marketed, says Emilio Salvador Prieto, senior director of Windows marketing at Microsoft. So far Microsoft has only said that Windows 10 will be a free upgrade for the first year for those running Windows 7 and up.

One place where subscriptions are confirmed as coming to the Windows 10 platform is the Windows Store. Developers that want to use in-app purchases to serve customers content or new app features on an ongoing basis can do so via a subscription model.

“With Windows 10 we’re putting apps back at the centre of the experience,” Prieto says. “We’re doing everything we can for developers so users can find the and discover their apps.”

For now, Windows 10 remains in consumer preview mode and can be downloaded from Microsoft’s Windows Insider program. No release date was given for the forthcoming OS, but it’s expected sometime this summer.

Tablet shipments continue to decline, but there are bright spots
About Brian Jackson

Cyber Security Today, March 24, 2021 – More tax scams, more COVID scams and why Microsoft SMB has to be locked down