SAN FRANCISCO – The first thing that Microsoft handed to me when it was time for my demo with the HoloLens was a pad of paper and a pen. They were taking away all my technology from me.

No photos or videos by media were allowed for the HoloLens demos at Build. Just 15 minutes wearing the device, carefully guided by Microsoft employees. And the demo was really good.

Without any smartphones, laptops, or recording devices to aid in our reporting, tech journalists were given tools to take notes the old fashioned way. In my group to demo the HoloLens was a reporter from France and two from Korea. A public relations employee from Microsoft’s Redmond headquarters also joined us.

Since announcing HoloLens in January, Microsoft has been tight-lipped about the project. A few more details have emerged during this Build conference. The Microsoft employee shares with me she was surprised to learn the headset was developed in an underground research lab, in the basement of one of the most public buildings on Microsoft’s campus. Yet she didn’t even know there was a basement to that building.

After getting handed t-shirts with HoloLens branding and putting any electronic devices we have on us in a locker, we’re greeted by an “experience ambassador” from Microsoft. She takes us to a demo room; a living room set with two cameras that are rigged up with HoloLens gear.

Momentarily, Jeff and Dan emerge and introduce themselves. Even though there’s just four of us in the room and we’re sitting a few feet away from them, their voices are projected over an amplified speaker. We’re told we’re about to see the Skype demo with HoloLens, and we’ll be able to see what Jeff sees through his HoloLens by watching several monitors around the room.

So now we’re seeing Dan on the coffee table in the same kind of Skype window you’d see anywhere, and Dan is apparently seeing what Jeff sees through a camera on the HoloLens. But why not just set a tablet down on the table, you ask?

Jeff and Dan proceed to exchange some 3D models. Dan starts by showing off a 3D model of the Seattle Space Needle that he made in Minecraft. He sends it over to Jeff, and Jeff can walk around it and look at it as though it were physically in front of him. The model’s size can be changed fluidly, so at one point it towers over Jeff. In the end, he picks it up and makes it about 18 inches tall and places it on a shelf. The hologram stays there for the rest of the demo.

Next Jeff and Dan look at a 3D model of the Build logo, featuring some iconography of the San Francisco city line. They decide to change a couple of details and place some text on the model. Then they send it to the 3D printer that’s sitting in the living room. Rather than have us wait to see it printed, they produce one that was already made.

Next we’re moved up to a higher floor of the hotel, and after we get off the elevator there must be about 15 Microsoft employees in blue shirts lining the hallway. We’re taken to a waiting area for a moment, then into a training session led by Matt.

Matt tells us there are three ways to interact with HoloLens. We can shift our gaze around, and it will react by showing us digital content or a mouse cursor in different locations. We can do an “air tap” gesture, basically like clicking a pretend mouse with more emphasis, to tap on interactive digital content in our environment. Or, we can use voice commands with HoloLens.

Jeff uses a device to measure the distance between our pupils, a number called the interpupillary distance, that will be important for calibrating the HoloLens. Next, it’s time for the demo.

I sit down and put on the device, with my guide helping me. There’s two main bands that keep it on your head and it sort of feels like placing a tight fighting baseball cap on your head. My guide turns a knob to tighten the device to my face so there’s no slippage when I move my head. To calibrate the device, I’m looking at a Windows logo with a rectangle around it, and I adjust the headset to see the entire rectangle in my view. 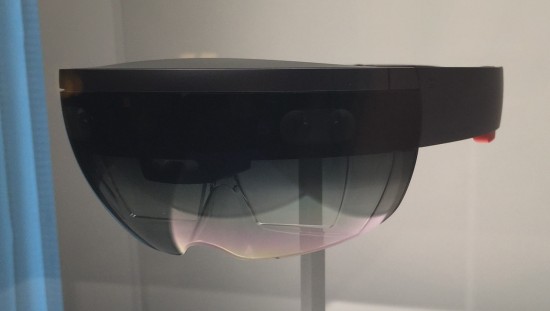 The headset isn’t very heavy to wear and feels quite comfortable. When there’s no content on the screen, it’s easy to look through the lens and see the world around you. One of the first things I noticed is that the digital content area is not as large as the lenses on the outside of the device. There are smaller lenses that display the content on the interior.

The 3D model of the building pops up and I can walk around and look at it from different angles, just as if it were really there. It’s a light blue colour and it’s displayed very crisply. It sticks in place and I really have the feeling that it’s physically there. But if an object moves between you and the digital model, that illusion is disrupted a bit because the content now appears on top of that object. You can’t get around the fact this is really just centimetres from your eyes.

Pinć, a $99 virtual reality headset, could be your newest office gadget

Next it’s time to manipulate the model. First we do this by working on a PC, using a mouse to click on the rooftops and change their heights. When  I look back to the digital model, it responds in real time to what I’m doing on the monitor. But we can do better than that. I’m instructed to simply guide my cursor off the screen and it enters the room. Now I can float the cursor over the digital model in front of me and do the same manipulation as I’m looking at it.

If I look away from the cursor, it stays where I left it with the mouse. When it comes back into my gaze a little target icon shimmers to catch my attention and show me where it is.

My guide brings my attention to a little man icon on the floor of the building model. I use the mouse to click him and suddenly I’m taken into the street view of this Denver courtyard. I can look around and see what looks like a real street in front of me and the virtual model of my community centre placed in the background. At this point, the HoloLens view is basically obscuring my entire field of view and I’m almost completely in a virtual reality, looking around Denver. Again, the screen seems very vibrant.

That concludes this portion of the demo. Now we walk over to a corner where some faux brick walls have been set up. We’re going to use HoloLens to discuss how this section of the building will be modified. As I look at the brick wall, blueprints for the new design appear on it. Suddenly, the architect I’m collaborating with in this scenario is calling me with HoloLens.

The architect appears in the room with me as a sort of hologram cartoon. This is confusing to me as it’s not clear if HoloLens is going to have sprites represent people that we’re talking to, but it does look impressive. The blue man is 3D and he has some animation to him, so I feel like he’s really talking to me. I’m hearing him through little speakers that are close to my ears on the HoloLens, and he really sounds like he’s talking from the location that he’s represented as being in the room visually.

Now the brick wall appears partitioned in the areas I see through HoloLens and we’re looking at the structural support beams for the building. My hologram cartoon assistant tells me the doorway in the designs will have to be moved because of one of these beams. He drags it over towards the far wall. Now we’re looking through it and into a lovely new outdoor annex that will lie beyond the door. Problem solved.

Or so I thought until we look at the plumbing overlay for the building. Now I can see a pipe is directly in the doorway. My demo guide suggests I tap it and leave a voice note when prompted. I do so, “air tapping” the pipe and leaving a note that it needs to be moved. Now I can see an icon tagged to the pipe with a play button. I tried to play back the voice note and while I heard a click, I couldn’t hear my recording.

This concluded the demo.

I’ve worn several headsets, including the Oculus Rift, and the Meta augmented reality headset. If I’m being honest, this was the best experience I’ve had with a wearable headset yet. It was also by far the most controlled experience.

Still, today I feel like I looked through HoloLens and saw the future on the other side.

Beefing up your analytics bench strength
About Brian Jackson