Raspberry Pi Foundation’s $25 PC will become available by the end of this month, and buyers hope it could fill in as a low-power desktop, while being an alternative to the more expensive open-source hardware.

The Raspberry Pi PC is an uncased motherboard the size of a credit card that is capable of running basic word processing and Internet applications. The computer has basic input, display and networking ports, and can run Linux flavours including Fedora, Debian and ArchLinux.

Technology enthusiasts have been lining up since the device was announced last May. Some want the PC as an inexpensive way to replace home-theater PCs or low-power Windows desktops for basic Internet and productivity applications. Some also hope to contribute to the goal of nonprofit Raspberry Pi Foundation to promote programming among students.

The PC has a single-core ARM CPU running at 700MHz, up to 256MB of RAM and a graphics engine that is capable of playing high-definition video. The device can be powered by batteries or a microUSB port, and peripherals can be attached through a USB port. For $35, the PC will include features like an Ethernet port. However, the hardware pales in comparison to more expensive phones, tablets and PCs, which run more dynamic and demanding applications. 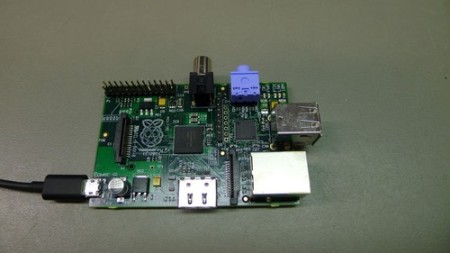 The device can run a broad range of applications, from robotics to aerospace to media streaming, said Eben Upton, executive director of Raspberry Pi Foundation. “I’m sure people are going to come up with some completely crazy stuff,” Upton said.

Beyond the price, some buyers are attracted to Pi as a low-power media streaming device. The Pi’s powerful graphics processor is capable of handling Blu-ray video, and can be connected to a high-definition TV through an HDMI (high-definition multimedia interface) port.

“I plan on using the device as a home-theater PC to replace my older Atom nettop. I also plan on using another unit as a home file-web server. I never have to worry about powering the system down to conserve energy,” said Brian Giguere, a Web developer and designer in Massachusetts.

Christian Wacker, a student at Concordia University in Nebraska, wants the Pi to be an affordable home-theater PC replacement.

– Express IT: Mac vs. PC budget editio
– How to create a great home-office network
– Inexpensive ways technology can keep your home life happy

“This is much, much cheaper than Google TV, and also much more power efficient than a full home-theater PC,” Wacker said, adding that simple tasks like file sharing, network management, checking email and basic Internet usage would also be possible.

But the device is not a true PC replacement, Wacker said. The Pi’s capabilities are also limited by the inability to run WINE, an emulator that allows Linux users to run Windows programs.

“The biggest difference between the Pi and a standard PC is the processor. Since it is ARM, it won’t be running any standard OS, and will need a special ARM compile of programs,” Wacker said.

The barebones Pi system is also a good tool for those who want to learn programming basics without spending a fortune on a beefier system, said Alicia Gibb, a technology enthusiast in New York.

“People use barebones systems because they’re cheap, contain the proper amount of processing power and memory to get the job done, and usually have a smaller form factor,” Gibb said. “It’s a matter of using the right tool for the right job. You wouldn’t pound a hammer in with a nail.”

Pi alternatives include Beagleboard, a $89 barebones motherboard that can run a full Linux OS, or open-source hardware like Arduino boards, used by hobbyists to create robotics for specific tasks like pulling bedroom curtains and creating race cars. Some buyers said that Pi is more feature-packed than Arduino boards, which are based on open specifications and designs.

The Pi hardware is very basic, and an Android phone may be more powerful than this device, said Katy Garner, a software engineer in the U.K. But she wants to buy the Pi to contribute to the non-profit’s long-term cause.

“The tremendous interest is because it is a charity, and it’s all about getting kids excited and involved with programming,” Garner said, adding that she would create tutorials on the device.

There is a shortage of graduates joining the software industry, and much more development is happening overseas, Garner said. She hopes Raspberry Pi’s efforts leads to more investment in the local technology industry.

“The hope is to inspire a new generation, who will become as passionate about programming as we are,” Garner said.