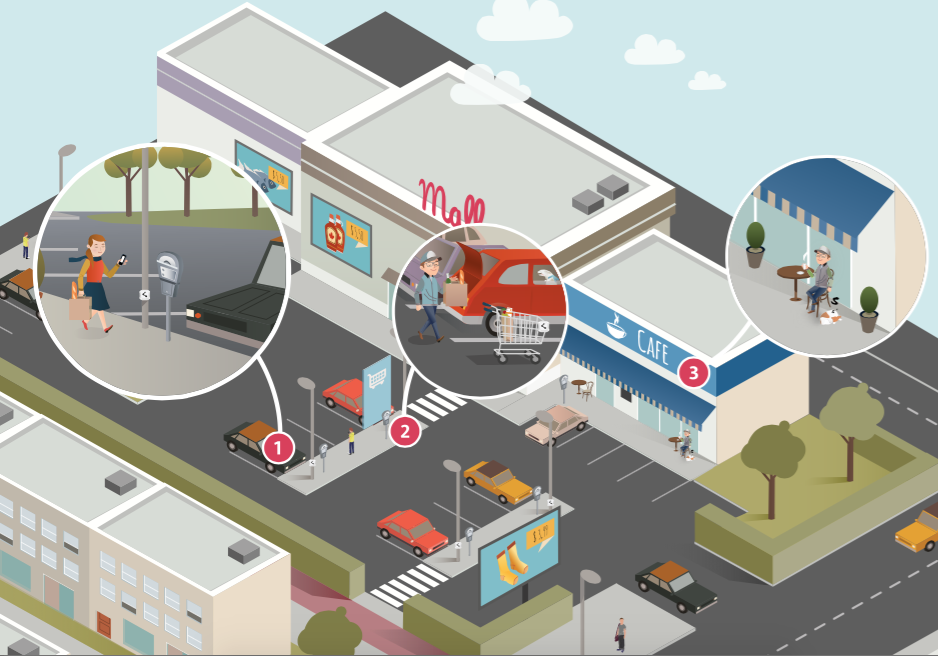 If you’re visiting a cafe or small storefront in downtown Saint John, N.B. sometime soon, don’t be surprised if you receive a message to your smartphone offering to pay for your parking – and when you do, it’ll be thanks to a creative use of Bluetooth beacons.

It used to be that shoppers in the Saint John core felt rushed, says city councillor Greg Norton. “We had a parking problem. Shopping in our core would often result in a ticket, or in customers going to shop and once they purchase something be rushing to leave.”

When the city went looking for a mobile app solution to alleviate the need to rush back to a meter and pump it with coins, it found Fredericton, N.B.-based HotSpot Parking. It had a business model that would allow it to offer Saint John’s drivers to pay for their parking from a smartphone at no cost to the city. By deploying Bluetooth beacons at nearby businesses and offering them advertising and engagement services through a mobile channel, HotSpot Parking required no new infrastructure and promised to help drive foot traffic to local businesses.

“This never would have got legs if it was going to cost the taxpayer more money,” Norton says.

Saint John was one of the first deployments for HotSpot, done less than 18 months ago. It’s now extended its services to other maritime cities Charlottetown, Moncton, and its hometown Fredericton. It started by offering its own solution to enable mobile payments for parking, but is transitioning to working with a partner in Charlotte, N.C.-based Passport Parking, a company that’s already deployed its solution as a white label app in cities including Chicago, Boston, and Toronto.

The partnership will help HotSpot Parking gear up for a Fall push that will see it reach out across North America, entering into metropolitan markets in the U.S. and Canada. The hope is to get the jump on deploying Bluetooth beacons to businesses before tech giants like Facebook do it, says Eric Feunekes, vice-president of growth marketing at HotSpot.

“All these giant companies are doing it because it’s an exciting technology that allows you to locate people to a much more accurate degree… when you’re competing with companies like Facebook it’s not an easy race,” he says. “Just having a larger Bluetooth network out there is going to be very valuable in the coming years.”

To win the beacon arms race, HotSpot’s strategy is to offer a freemium model to businesses. Local shops that deploy the puck-sized devices in their shops will be able to offer customers a range of solutions made possible through HotSpot’s platform. All it takes is a customer that has the pay-for-parking app on their smartphone to move within proximity of a store’s Bluetooth beacon and an interaction can be triggered – so long as users have opted-in to receive such notifications.

Businesses can offer their customers features such as:

“Our goal is that when you walk into a business, you don’t have to worry about your parking,” Fuenekes says. For businesses, there’s more potential benefits to reap.

A customer dashboard shows business owners how often specific customers visit, how long they spend in the store, and how likely they are to stop by when they’re in the area. If app users complete a social profile, owners can see who is in their store the moment they walk through the door. A mobile app offers the same view from Android and iOS devices.

Where HotSpot plans to make its money is contextual, location-based advertising. The concept is that when customers park their car in the area, an ad can be sent to them, and given higher priority as they move closer to your store. “It’s nice to know there’s a promotion at the store that’s just a block away, as opposed to the one you’re about to go into,” Fuenekes says.

Since the platform detects when customers enter the store, it only charges businesses for conversions – people coming in the door.

HotSpot uses Bluetooth beacons provided by Krakow-based Kontakt.io. The firm highlighted HotSpot’s unique beacon-powered solution in a recent whitepaper, which found that 30 per cent of drivers chose to visit a HotSpot business and that HotSpot users spend 13 per cent longer in the store than other customers.

“One of the real hallmarks in innovation in this space is coming up with new ways to deploy beacons,” says Trevor Longino, head of marketing and public relations at Kontakt.io. “At least half the business we’re doing right now isn’t retail based.”

Battery life was one of the determining factors for HotSpot in selecting Kontakt.io’s beacons, he says. When using Apple’s iBeacon protocol – the format that HotSpot parking is currently configured for – a beacon will last between 19 and 25 months, Longino says. A “power sleep” feature allows businesses to turn the beacons off when their stores are closed.

Kontakt.io’s beacons are configurable, so they can support both the iBeacon format or Google’s new Eddystone format. Currently, a beacon has to choose one mode or the other, but Kontakt.io is looking to develop a configuration that would support both simultaneously without too much of a hit on battery life, Longino says.

While HotSpot readies to deploy the beacons to other cities, Saint John is seeing an impact already, according to Cllr. Norton. In the last several months, commercial vacancy rates are falling as new businesses inhabit the downtown core.

“They never fail to mention HotSpot Parking,” he says. “It’s always an incentive for them to set up.”

He doesn’t even mind the hit the city’s taken on revenue as a result of fewer parking tickets being handed out. That cost is worth it, he figures, if it makes residents happier and more willing to shop.