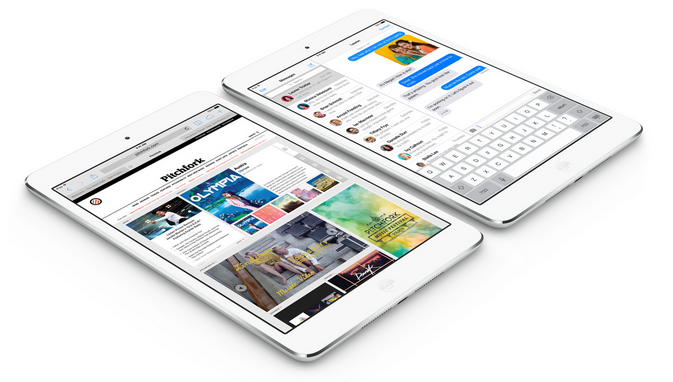 Apple’s second-generation junior-sized tablet went on sale today in Canada with the iPad mini with Retina display available from Apple’s online store, but not yet in stores or at other major retailers.

The new iPad mini is on sale at Apple’s online store starting at $419 for the Wi-Fi model with 16 GB of storage. Bump up that price $100 for step up in storage (32 GB, 64 GB, and 128 GB is available) and add $130 if you want the cellular LTE capability. Apple’s store location at the Toronto Eaton centre says that while the tablet is available for sale online, they don’t have stock on the shelves yet, but could have it available by tomorrow.

Updating last year’s iPad mini, Apple has now packed more pixels into the 7.9-inch screen size, giving it the same resolution of 2048 x 1536 and a pixel density of 326 pixels per inch. It also has some other upgrades like a faster A7 chip with 64-bit architecture and Apple’s iSight camera that takes 5 megapixel pictures at a f 2.4 aperture.

Apple’s lower-cost tablet competes against other Android-powered devices with 7-inch screen sizes such as the Google Nexus 7 or the Kindle Fire HDX, both coming at a lower cost. Even the lower-cost iPad mini is still more expensive than those alternatives at $319.

An early hands-on review from TechRadar.com praises the new iPad mini’s higher resolution screen as “stunning” and “fantastic.” It describes the tablet as responsive and efficient “with no discernible problems.”

Last year’s iPad mini release was a consumer success, selling 3 million units in its opening days. The tablet has also been embraced as a business tool by many, and a popular choice for many schools and hospitals looking deploy tablets en mass.

We liked the first iPad mini hardware and reviewed it well in our All Hands on Tech video segment. Check out the video for some usability hacks and accessory tips for the smaller tablet.

Brian Jacksonhttp://www.itbusiness.ca
Editorial director of IT World Canada. Covering technology as it applies to business users. Multiple COPA award winner and now judge. Paddles a canoe as much as possible.
Previous article
Advertisers are cookie monsters when it comes to impressions, study finds
Next article
Websense Triton looks to intercept targeted cyber attacks