Jordan Banks wants to bring Facebook to your fridge and your car.

Really. The new managing director of Canadian operations Facebook sees a future where the social graph isn’t connected to your phone or your computer, but is at your fingertips at all times, embedded in every connected device.

That’s just one nugget of information Banks discussed with ITBusiness.ca in one of his first interviews since taking on the new role. The head of this country’s most popular social network site also addressed questions about how Facebook will further help businesses engage customers online, and how Facebook has a lot of growing to do yet.

We also asked him about the challenges posing Facebook – a class-action lawsuit, and the second, on-going investigation by the federal Privacy Commissioner’s office. 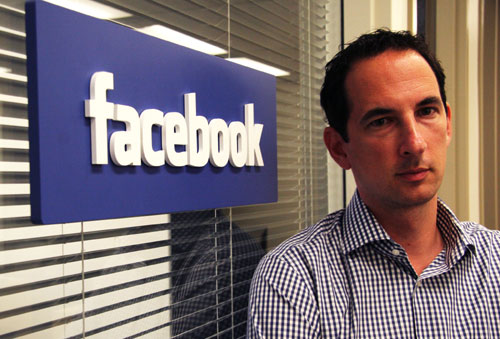 Jordan Banks, managing director of Facebook Canada, based in Toronto.

Q: Could you start by giving us a brief history of Jordan Banks?

A: Sure. I started on Bay Street as a lawyer, and then I went to the NHL Player’s Association where I looked after international business and licencing. From there, spent seven years at eBay, setting up eBay in Canada and helping grow the business. Then I became the CEO of JumpTV, an online video company that ended up merging with a company in the U.S. called Newline and is now run out of New York. Post Newline, I was sort of a full-time Dad for a little while and invested in early stage tech companies both in Canada and the U.S. I knew lots of people at Facebook and I was intrigued in what they’re doing and what they’re doing in Canada.

Q: Thanks for accepting my LinkedIn invitation. I also found you on Twitter. What social networks do you use, and how do you use them?

I use Facebook predominantly to keep in touch with people that matter in my life, and I like to hear from other types of brands and products that are also meaningful. So I use that as sort of my primary mechanism and not only accepting information and hearing about what’s going on, but also giving it and contributing.

I use LinkedIn professionally, I think of it like a virtual business card. I use Twitter as sort of a broadcast medium, where I can get news from people I think are insightful and prolific. The vast majority of my time is spent in the social environs of Facebook… [Next Page]

Q: I started using Facebook as a way to stay in touch with my friends. But more and more I find myself using it day to day for business use too. Do you think this reflects an evolution in the Facebook platform, or a change in users’ approach to Facebook?

A: I think that might be one of the biggest social trends that we’re seeing. The fact that users on Facebook don’t just want to be social with their friends, but are expanding and defining what their social graph is like and reaching out and involving themselves in discussions with brands they identify with. I think that’s an important point, because when you think about your brand online it’s not just about your friends or your colleagues or for that matter, your relatives. It’s about other types of objects that you identify with.

We’re using Facebook not only as a social mechanism, but as a mechanism to connect with big and small brands so we can stay in the loop. At the end of the day, I really believe we are in this era of conversational marketing and gone are the days when one-way marketing and one-way conversations are acceptable. Facebook ends up being sort of the ultimate platform, so we can engage in that sort of conversation.

Q: I think companies are starting to see the value in that sort of marketing. It’s really a way to deliver to a niche audience.

A: Canadian businesses are super excited about that exact targeting capability. If you think about traditional demographics, it used to be ‘I want to get an 18 to 35 year-old female.’ I’d argue that an 18-year-old female doesn’t have a whole lot in common with a 35 year-old female. So that target group is interesting, but not very precise. So Facebook does give you that opportunity to deliver very relevant, personalized and timely content to anyone that’s put up their hand and said ‘Hey, I want to learn more about your brand.’

Q: Part of your job is to increase Facebook’s adoption in Canada. If businesses are starting to use Facebook more often, do you think you might try to encourage that more?

A: If I look at our three main priorities of this office, they probably all relate to that question. The first priority really revolves around education and information, and making sure Canadian businesses are well-equipped to succeed on Facebook. The second thing is taking all the wants, needs and hopes of Canadian business and translating that back to our engineers so when they are developing the platform, they are developing it with those interests in mind. And the third part is truly partnering with these companies, to ideate with them and to innovate them so we’re true thought partners and we’re not just there on a campaign by campaign basis, but we’re there as part of an integrated marketing strategy where they think about us as a key component of everything they do across all media. So those are the three priorities of our office.

Q: That’s sort of a big picture view. Can you name any precise things that Facebook is doing to assist businesses online?

A: I think right now some of the key attributes to get businesses excited is Facebook’s reach. So we hear from businesses all the time that they spend on TV. The Superbowl, which is sort of the biggest event on Canadian TV in a year might attract 5 million viewers. While any given day that same brand can use Facebook and they can reach at least half of our Canadian user base.

If you look at the Pages product itself, it continues to evolve and have more features and more functionality and more tools for brands to make those connections. The other thing that’s really important to understand is Facebook as a platform. So we’ve built this really robust platform with these things called APIs that we’ve spun out to the development community to build apps on this platform to sort of evolve the experience of businesses. It’s really incumbent upon that whole eco-system of app developers to listen to what the market needs and then develop what will make businesses more successful.

Q: Where is the most potential growth for Facebook – on the Web or through the mobile channel?

A: Well about a third of our users now access Facebook on a mobile device. What we know about those users is they are about twice as engaged in the experience as those that just access Facebook on their PCs. So I think mobile is a really important part of the Facebook experience.

This concept of a social graph is a really interesting one when you think about what it actually is. Your social graph is sort of your online map of everything you’re interested in and connected to. You can actually take that graph and port it to any device. In the future, that could be your fridge, where you could take friend recommendations about what they’re eating and what they like. It could be your car, where you take recommendations about restaurants and hotels. So that’s really the exciting part, when you take that social graph and how to use it in the future. It’s not going to be tethered to a computer or a mobile phone, but ubiquitous and on every networked device that you use… [Next Page]

Q: Will Facebook always be a Web site and mobile application or could it evolve into a kind of OS?

A: The way I like to think about Facebook is that it’s a true social utility, and that transcends the channel its delivered through. I think that’s the way our users think about it as well. It’s a true social utility, and it allows me to reach out and connect with and be informed by people and things that I relate with. It’s almost irrelevant how I do it.

Q: You’ve got a tough job. There’s 15 million Canadians on Facebook. That’s really high penetration, do you really think there’s that much more room to grow or are you at saturation?

A: We’re only at the very early stages. When I think about saturation and penetration, I say to myself ‘this is a community of users that adopted Facebook at the earliest of stages and incredibly embraced it.’ As Facebook evolves as a platform and we have more features and functionality on more devices, it just becomes more relevant in their lives. Rather than thinking about saturation and penetration, I think about opportunity. I think that if the opportunity is on a scale of 100, we are probably at about four or five.

As far as penetration, we have about 80 per cent of Canadians that have Internet access and are age appropriate.

Q: Merchant Law Group has taken those 15 million users and included them in a class-action lawsuit against Facebook. This relates back to privacy changes Facebook made in November and December, which is before you joined the company. But how do you plan to meet this challenge?

A: I know very little about it. You’re better served speaking with some of our lawyers that are involved on a daily basis with that type of issue.

Q: Going back to the root cause of that law suit, Facebook put a notice out to all users to go and look at their privacy settings. Once this was done, some of those settings were set to a new default that could have made some information more public than before. Do you think that if Facebook had to do it again, they’d do it differently?

A: I can’t even speculate on that. I wasn’t around and I have no strong opinion on it.

Q: So do you think this office will play a role in that in the future?

A: In the future we’ll play a role, for sure.

A: I wouldn’t speculate. I think that’s still to be determined.