BitDefender is trying to strike a balance between security protection and speed with its small home office software, and selling it at an affordable price starting Aug. 17.

The Bucharest, Romania-based security vendor doesn’t have a well-known brand like Symantec Corp. or McAfee Inc. and it seems to know it. It prices its software suite to be about 15 to 20 per cent less expensive than those brands, and promises reliable security that won’t bog down your computer’s performance. Its software will be available in three packages – Antivirus Pro 2011, Internet Security 2011, and Total Security 2011.

The latter package includes all the trimmings of a modern security software suite, including file encryption, back-up and a “tune-up” feature.

Related Story: Ultimate security software guide – get the best bang for your buck

“Suites are nice security packages, but they do come with a lot of features that might slow down a machine,” says Vitor Souza, global communications director at BitDefender. “It’s all about speed.” 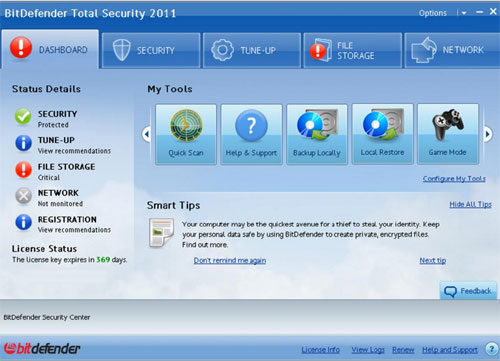 BitDefender’s home screen can be customized with different short-cuts.

BitDefender causes Windows 7 to boot 3 per cent slower, and Microsoft Word to load 4 per cent slower. That equates to a few seconds faster than the industry average, says Carmen Maierean, senior product manager at BitDefender.

Computer security really does come at the sacrifice of some performance, agrees Charles Kolodgy, research vice president for secure products at analyst firm IDC. Intrusion detection and gateway check-ups will tax the CPU.

“The big drive for many products has been how fast do they do a scan? How fast do they boot up?” he says. “There is a performance cost to using security and you have to make it as low as possible.”

BitDefender’s Quick Scan feature runs in less than one minute. It relies on BitDefender’s Cloud Scanning Service that is also available via its Web site. Since the online database is updated more quickly than a local client version, it can be more effective at catching freshly released malware programs. 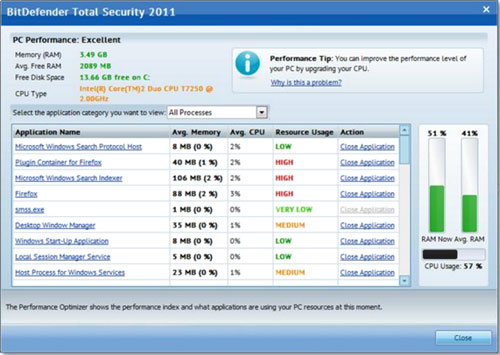 The suite comes with a performance optimizer tool.

“It’s a very quick scan that detects any malware that might be running in the memory,” Maierean says. “The server side is updated continuously the client side is updated hourly.”

BitDefender offers a personalized user experience that presents one of three dashboards to the user – a beginner level, an intermediate level, or an advanced level of settings. A short survey upon install will determine which one is best to start with, and the user can choose their expertise level at any time.

Related Story: Ultimate security software guide – get the best bang for your buck

The main page of the dashboard can also be customized to offer shortcuts to a users’ favourite software features. For example, small business users may want to make a hot link to the home network management feature, Maierean says.

Other features include Smart Search, meant to be used to search for advice on how to clean or defend against a particular piece of malware. There’s also video tutorials to instruct on how to use the software.

Parental controls can be used to block certain applications or Web sites. In a small office setting, these can be thought of as “employer controls,” Maierean says. “Administrators would be able to see that Facebook has been accessed 30 times in the past day, and then choose to block it from there.”

BitDefender is targeting the small home office segment with the same software it sells to the consumer market. But there’s no problem there, IDC’s Kolodgy says, small shops will get what they need from the suite.

“The big difference between the consumer and the enterprise is being able to do simple management. If you’re a small shop than doing centralized management isn’t that critical,” he says. “The products are virtually the same because they’re designed to stop malware and spam.”

The product does include encryption capabilities, which will help small businesses stay compliant, he adds.

Brian Jacksonhttp://www.itbusiness.ca
Editorial director of IT World Canada. Covering technology as it applies to business users. Multiple COPA award winner and now judge. Paddles a canoe as much as possible.
Previous articleTop 10 BlackBerry Torch bonuses and busts
Next articleInterview with Facebook’s new head of Canadian operations