Marketers looking to target a Canadian audience may soon have a new option in their toolkit – Instagram ads.

The Facebook-owned, snapshot-sharing social network has been ad-free in Canada to this point, even while selfie-snapping Instagram users south of the border were exposed to ads. But that will change starting today as ads start to roll out to Canadians too. Six household-name brands are being included in the launch: HBC, Air Canada, Target Canada, Travel Alberta, Sport Chek, and Mercedes-Benz.

The ads appear natively in the Instagram feed, appearing just as a normal post from another user would. The difference is that even users that are not following an advertisers’ account will be exposed to that post, and a “Sponsored” label appears in the upper right-hand corner. 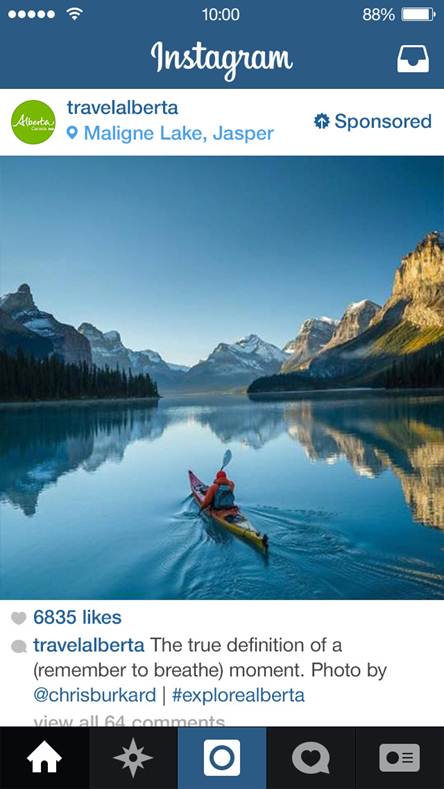 Users have the option to turn off ads from a specific campaign. By tapping the extra options icon that looks like three dots in a vertical line, they can opt-out of receiving that post.

Instagram has 200 million users accessing it on at least a monthly basis and sees an average of 60 million photos or short videos (up to 15 seconds long) uploaded daily. Sixty per cent of Instagram’s users are outside of the US.

While Canadians embrace social media more on average than the rest of the globe (more than eight in 10 have an account) and spend an average of 2.3 hours per day on social media, Instagram isn’t a top ranking social destination. According to the GlobalWedIndex, Canadians are most likely to have accounts with: Facebook (85 per cent), Twitter (46 per cent), Google+ (45 per cent), LinkedIn (30 per cent), and Pinterest (26 per cent).

Ads have been featured on Instagram in the US since November 2013. A blog post detailing the first four completed campaigns, 10 months after that launch was shared by Instagram on its business blog.

No word from Instagram yet on pricing for the ads, or when the feature will be open for business to other companies.