The plan, dubbed Digital Canada 150, will include 39 new initiatives towards a more connected Canada, according to Industry Canada. A wide-ranging plan that touches upon several aspects of parliamentary law-making around technology regulation and support, the plan is built on five pillars. That covers: connecting Canadians, protecting Canadians, economic opportunities, digital government, and Canadian content. 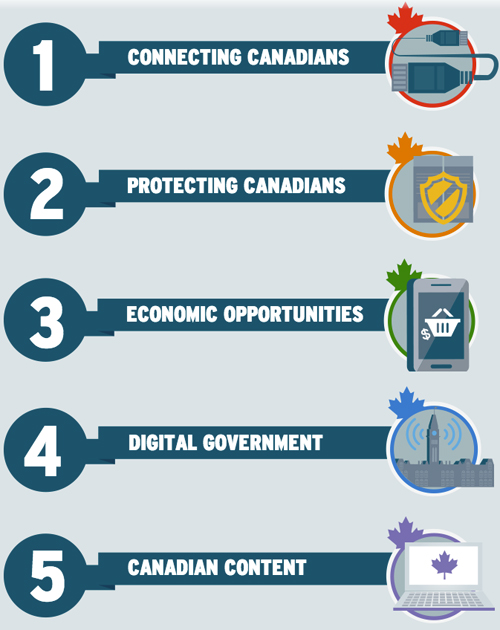 The plan follows an online consultation exercise that took place over three months in 2010. It aims to have 98 per cent of Canadians given the opportunity to access to providers offering high-speed Internet connections at 5 megabits per second, confidence their online transactions are secure and privacy is protected, and hold wireless telecommunications companies to capped roaming rates or else face penalties.

Funding to the tune of $305 million will expand the 5 mbps Internet connections to 280,000 rural households. Those households will be gaining access to high-speed Internet for the first time, Moore says.

The government is capping roaming fees in order to boost competition, Moore says. This will prevent wireless providers from charing other companies more than they charge their own customers for mobile voice, data and text services while outside of Canada’s borders.

“We’re not looking forward to greater consolidation and concentration of Canada’s wireless services,” he said. “We have an obligation and a responsibility as a government to inspire more competition.”

Industry Canada will go ahead with its plan to auction the 2500 megahertz band spectrum in April 2015. But will also implement a “use it or lose it” policy for all companies that hold wireless spectrum licences, meaning it can’t be hoarded without being put to use for a service benefitting Canadians.

Moore says he will introduce new legislation in parliament next week, a bill called the Digital Privacy Act. It will update the Personal Information Protection and Electronic Documents Act (PIPEDA).

“This is an update to the PIPEDA legislation that’s already on the books and updating it for the digital age,” Moore said. “This will give the Privacy Commissioner new powers to protect Canadians as they venture online.”

The Privacy Commissioner will remain in an ombudsman role but will have some new tools to use to enforce privacy laws. The new law will require organizations to notify the Privacy Commissioner when they experience a data breach, Moore said. He used the example of his 75-year-old father doing some online shopping with his iPhone to demonstrate how fraud could discourage online shopping.

Also new are anti-moneylaundering and anti-terrorist financing regulations for virtual currencies. An enhancement to the Financial Transactions and Reports Analysis Centre of Canada.

The Business Development Bank of Canada (BDC) will earmark $200 million to support technology adoptions for SMBs under the digital strategy. It will also have an additional $300 million available for venture capital to invest in companies in the information and communications technology sector. In addition, the Canada Accelerator and Incubator Program will increase to $100 million to help digital entrepreneurs.

“In the world of patent trolls and IP thieves and everything else, we have to make sure that when someone patents an idea, it’s not just applicable in Kitchener/Waterloo or in Ontario, or in Canada, but across the world,” Moore said. “This is a global digital economy, therefore our laws have to be updated.”

To build upon the government’s open data strategy, it will create an Open Data Institute. The government will begin by testing prototypes developed by private sector players to provide new data products and services to the marketplace. Many of those first projects may be based upon the Canadian Open Data Experience appathon that say 900 developers creating apps based on open data from the government.

“Wer’e going to be modernizing the government of Canada internally, to finally catch up to the 21st centrally,” Moore said. “Why are we building our digital Canada government infrastructure for a $300 laptop instead of for the $1,000 smartphone?”

As part of that effort, the government’s 60 different email systems, 300 data centres, and 3,000 electronic networks will be merged and streamlined.

A partnership with Historica Canada will see the creation of new new “Heritage Minutes” short films on key events in Canadian history every year until 2017. Historica’s digital archive The Memory Project will also be expanded, documenting the involvement of Canada in several wars during the 20th century.

“It’s a sad stat but it’s an important one, in only four of Canada’s 13 provinces and territories is it required to take a Canadian history class to graduate from high school,” Moore said. “We need to make sure all of our institutions are sharing Canadian history so we can build and grow and share from each other.”

Shopify’s Tobias Lütke and other tech CEOs chart a path to scaling...