Toronto-based accelerator Incubes is expanding its program to include two streams for startups and has some new faces mentoring the startups under its wing.

Instead of running set 12 week-long semester with cohorts, Incubes will take applications 365 days a year and start incubating entrepreneurs on a more flexible basis. It has already onboarded two undisclosed startups for its early-stage program. The program’s founder says it will be interested in business-focused startups.

The Incubes Funnel program is for early-stage startups with big ideas that need to develop a core product and hone in on business deliverables. There’s no fixed time on how long the companies can take to graduate, and once they do, they can roll into the acceleration program. Incubes will provide office space, workshops, legal support, and other business services. Startups are charged an administrative fee and give 1.75 per cent of equity to Incubes. Those adopted to the acceleration program give an additional 5.75 per cent of equity.

“It will ultimately lead them to a position where they will onboard paying customers,” says Incubes CEO and founder Ben Zlotnick. “We already have a couple of companies in our funnel program and we’ll continue to onboard them as we go down the road.”

The Incubes Acceleration Program is described as “a highly-focused, hands-on, intensive program designed to help companies engage customers and investor early and effectively.” It has a rigorous curriculum that focuses on due-diligence deliverables. This program will also run on a rolling model without a set schedule. Startups in this program are fast tracked to receive $15,000 from the Canadian Youth Business Foundation. Startups give up 7.5 per cent of their equity to Incubes.

“What the accelerator program will be is about continuing to onboard paying customers, working with industry partners, and raising capital when they’re ready for it,” Zlotnick says.

Following the departure of former managing director A. Traviss Corry last year, Incubes also has a new management structure. Zlotnick remains as CEO, joined by Tim Ryan as entrepreneur in residence, Bryan Watson as director of strategic projects and connector in residence, and Roni Krakover as marketing and operations manager. 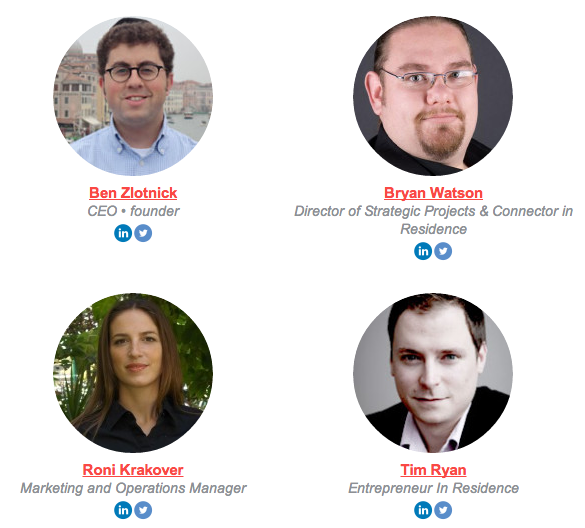 Ryan is the founder of Vestiigo.com, a recruitment platform that was acquired by TalentLab. He’ll be mentoring the startups on specific projects as part of their incubation experience.

“A lot of our mentorship going forward is going to be clear cut as far as the goals that they have to accomplish,” Zlotnick says. “We’re working with companies on specific needs they’d have.”

Watson will work with companies as overall director to give continuous feedback and advisement, he adds. Krakover will be focused on marketing Incubes program for now.

The last Incubes cohort had a heavy focus on business-to-business startups and that will continue, Zlotnick says.

“Many of the companies that are applying understand that they do have to build out an actual business, ultimately. Apps are great, but there’s always been a heavy push for B2B style companies.”

Incubes is taking applications for its two accelerator programs now via F6S.