For those line of business users that could really use the power and reliability of a workstation but just can’t justify the cost premium over a desktop PC, HP has launched two new entry-level workstations at a desktop price point: the HP Z240 Tower and Z240 SFF Workstations.

Both the tower and small form factor (SFF) models use next generation Intel processors and Skylight architecture and HP Z Turbo Drive options. According to Jeff Wood, vice-president of worldwide product management for HP’s workstation and thin client business, the new models are ideal for customers in the video editing, MCAD/AEC, education, public sector and image viewing industries.

“We’re striving for workstation class performance and power but competitively priced to appeal to people that may have been using a regular desktop to do AutoCAD or other work,” said Wood, in a media teleconference.”

Josh Peterson, director of worldwide product management for HP’s workstation and thin client business, added the Z240 will allow those users on the bubble between a desktop and a workstation to move up to a professional platform at a PC price. It could appeal to entry-level media and entertainment roles such as photographers, health care at the point of care, geospatial and government, and education where future engineers and artists on a tight budget want to train on the workstation technology they’ll encounter in the workplace.

“We’re excited about the customer opportunity,” said Peterson. “We’ve done a lot of homework on innovation that’s sure to excite these guys.”

HP is touting seven key innovations in the Z240, many of them developed based on user testing and customer feedback. 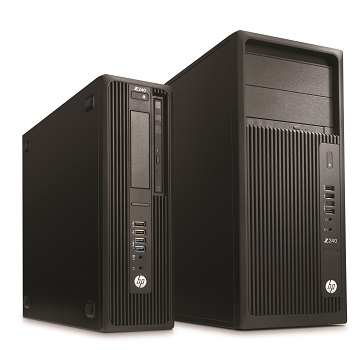 Both models will be available worldwide in November, starting at US$879.

“Our customers have an insatiable need for performance, and when we’re prioritizing innovation it’s always performance,” said Peterson. “Everyone is on deadline, everyone is busy so performance is key. Our focus is on reliability and quality. We win with quality.”

Jeff Jedras
Jeff Jedras is a technology journalist with IT World Canada and a member of the IT Business team. He began his career in technology journalism in the late 1990s, covering the Ottawa technology sector for Silicon Valley North and the Ottawa Business Journal. He later covered the technology scene in Vancouver before joining IT World Canada in Toronto in 2005, covering enterprise IT for ComputerWorld Canada and the channel for Computer Dealer News. His writing has also appeared in the Vancouver Sun & the Ottawa Citizen.
Previous article
Miragii aims to combine fashion and wearable technology for hands free experience
Next article
Five tips for getting the most out of Windows 10