When Thalmic Labs made the decision to go open source with its Myo arm band, it probably never imagined that doing so would lead to an amputee regaining the use of a limb.

Thanks to the work of Johns Hopkins Medical School, Johnny Matheny has become the first person to attach a gesture-controlled limb directly to his skeleton, and it’s controlled with the Myo arm band. The delivery driver lost the lower part of his left arm to cancer in 2008. Late last year, Johns Hopkins designed a Modular Prosthetic Limb and used Myo’s electromyography (EMG) sensors to measure the electrical signals sent from Matheny’s upper arm to control his lower arm. Those signals are converted into Bluetooth transmissions to a controlling computer mounted on the prosthetic, which then determines the motion to be made with the limb.

“It’s an incredible feeling,” she says. “When we say that video in the office here, we were just blown away by how far the technology has come.” 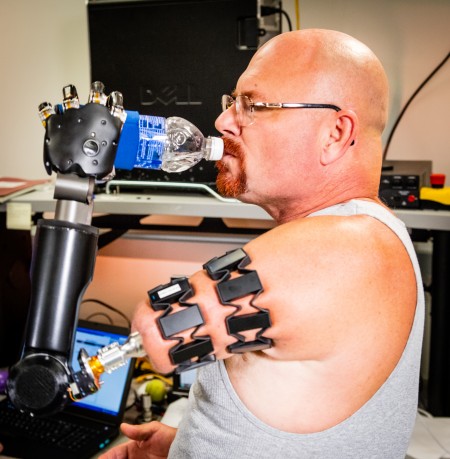 While the idea that someone may use Myo to control a prosthetic arm was in the back of the minds of Thalmic Labs employees, Banduk says it was Johns Hopkins that made it happen. Involvement by the Waterloo, Ont.-based firm was limited. That’s because it offers an open source SDK that’s free for any developers to use. Researchers at Johns Hopkins were able to buy the hardware and then code software to make it happen.

“The opportunities are really endless,” Banduk says. “We have an opportunity to make a difference in lives here… it could be useful for people that have limited mobility.”

While Matheny’s example sets a new bar for how Myo can help amputees, it’s not the first example of it doing so. Journalist Nick Ward asked for a review unit last year and then showed off video of using his computer with the device, despite not having a right hand. Here’s a video Ward posted publicly to Facebook demonstrating it, along with this post:

When you have one hand but technology is like ” I got Ü fam” and lets you control your entire computer by simply flexing muscles in your nub. What a time to be alive Check out my review of Thalmic Labs Myo Armband, out today on Your EDM: http://www.youredm.com/2015/11/19/thalmic-labs-revolutionize-music-creation-performance-with-the-myo-armband/