Ontario is the latest jurisdiction to equate holding a cell phone to your ear to speeding or running a red light – it’s dangerous and will get you a ticket.

Talking on the phone while we drive is something we all do, even though we know we shouldn’t. Just like we can’t avoid the temptation of looking at a car wreck on the side of the road, we can’t seem to resist testing fate by yakking while behind the wheel.

The results of which can be deadly.

Little wonder then that this Fall Ontario will join Quebec, Newfoundland and Labrador, and Nova Scotia in banning use of handheld devices while you drive. That means mp3 players and GPS devices not mounted to your dash are also included, not just cell phones.

Such laws extend south of the border as well. In California, Connecticut, New Jersey, New York and Washington, all drivers are banned from using handheld devices. 21 states ban the practice for young drivers, and 13 states have banned text messaging for all drivers.

But through the wonder of technology, there’s several solutions to keep you talking and entertained while in the car. Do be aware that just because you’re driving hands free, doesn’t mean that you’re safe or completely above the law. The Ontario Medical Association says that any use of a cell phone while driving is distracting, and if you cause an accident while you’re on the phone, you could face some stiff penalties.

Whether you want to comply with the law on a shoestring budget, or transform your vehcile into a handsfree entertainment emporium, it can be done. Here’s some options available to you, in order of price: 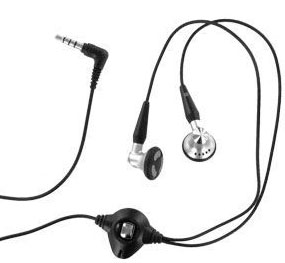 A wired heaset is the simplest option to keep it legal. Just plug-in your headset to the 3.5mm jack, or USB connection on your phone and you’re ready to yak.

Not only is this the cheapest option to stay hands-free, but it works with any phone, including those that aren’t Bluetooth-enabled, and the quality is pretty good. Also, many phones come bundled with a headset like this, so you’ve probably already got a pair sitting in a drawer somewhere.

These headsets also allow you to play music on your device and listen to it. But it’s probably not a good idea to be listening to music via headphones while you drive.

The downsides of this option are clear. You’ve got a physical tether to your phone that limits where you can place it in your car, and you’ll always have ear buds inserted while driving (trying to insert them quickly when you have an incoming call defeats the purpose, trust me).

On a budget: Bluetooth headset 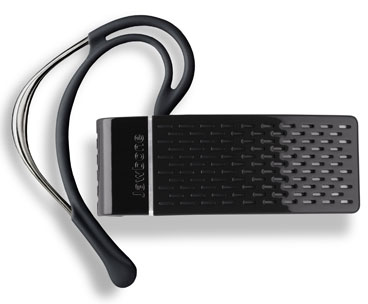 Many modern phones support Bluetooth, and this is the option most drivers will probably opt for if they want to simply talk on the phone while driving. Typical wireless headsets will connect with your cell phone easily after you do an initial sync. From then on, you just turn it on and you’re ready to talk.

There’s a virtual cornucopia of options available on the market right now for these headsets and they come at varying levels of quality. You can get a cheap one for around $30, but don’t expect great quality. I’ve consistently seen good reviews for the Aliph Jawbone headsets (image above). It is small enough to tuck behind your ear easily, and it has noise-cancellation technology to filter out the noisy car environment.

Bluetooth headsets aren’t intended for use with music players. Afterall, they just pipe audio into one ear – like most phone conversations. 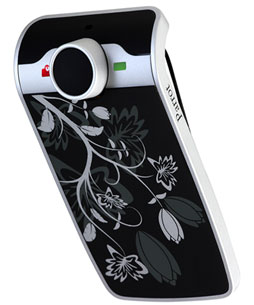 This is my method of choice for keeping my conversations hands-free. A bluetooth speakerphone connects to your cell phone the same way a headset does, but instead of wearing it on your ear, you attach it to your sun visor. If you’re like me and you’d always forget to take off your headset and leave it in the car, this is a good “stays-in-the-car” option.

I use Parrot’s Minikit device and find it quite reliable. It syncs with my address book and the voice recognition to dial works well. It also tells me who is calling when the phone rings, and the battery life is remarkable. The conversation quality is also quite satisfactory. It costs about $130.

There are other Bluetooth speakerphone options of course, some less expensive and some more. Some devices will link your phone with your car stereo via FM transmitter so you can play your tunes over the stereo. When buying a speakerphone for your car, be sure it has some good noise-cancellation technology – it’s a must.

If top quality is important to you and you want top of the line entertainment features supported as well as great call quality, then you can get a car kit installed to be hard wired into your stereo system. Many companies offer such products and you can often buy them from locations that will install them for you as well.

Microphones will be hidden around your sun visor area so that you can just start talking when incoming calls come in. If your stereo is playing, it will be briefly interrupted while you take your call, then resume when you hang up. As you’ll see in the video embedded in this story, Parrot offers such products that will play music off your iPhone, or even a USB flash drive.

Several problems stand in the way of marketers and IoT utopia

A significant number of employees are still falling for...
Financial

Following an announcement that Intel Corp.’s executive team will...