The iPhone 3G S’ hardware, including a faster microprocessor and a faster graphics processor than those in last year’s model, supports Apple’s claims that the new device is two to three times faster overall, a just-completed teardown shows.

According to Aaron Vronko, the CEO of Michigan-based Rapid Repair, the iPhone 3G S sports an ARM Cortex A8 microprocessor running at 600 MHz. Last year’s iPhone 3G, by comparison, sports an ARM 11 running at 412 MHz.

“One of the two most significant changes in the iPhone 3G S was to what’s called the Mobile Application Processor, the Samsung ‘system-on-a-chip’,” said Vronko, who flew to France to be one of the first to purchase the new iPhone. Vronko then took the phone to BricoMac, a Paris repair company, to disassemble the device.

Vronko has posted a step-by-step teardown, complete with photos, to the Rapid Repair site. As its name suggests, Rapid Repair is a repair shop and parts supplier for iPods, iPhones, Zunes and other consumer electronics.

The processor in the Samsung package boasts a new and improved ARM architecture, said Vronko, that in and of itself is almost twice as efficient at the same clock speeds as what Apple stuck in the iPhone 3G. “It’s the latest ARM design,” said Vronko, “running here at 600MHz. But with the faster clock speed, 50% or so faster than last year, the result is that Apple’s upgraded the iPhone 3G S 2.5 to 3 times in processing capability.”

When Apple unveiled the iPhone 3G S last week, the company bragged about its performance, saying that the “S” stood for “speed,” and that the new model was “up to 2x faster and more responsive than iPhone 3G.”

Vronko’s teardown not only bears that out, but shows that Apple could have amped up the iPhone 3G S even more. “The new ARM architecture supports designs up to 833MHz,” said Vronko, then cited three reasons why he thinks Apple didn’t push the envelope further.

“First, it didn’t need to, since the 2.5 to 3 times faster processing is more than enough to handle current apps,” Vronko said. “Second, the more you amp it up, the more heat, and the current design lacks any efficient means of heat diffusion. Third, upping the clock speed uses more power.”

Because of the heat issue, Vronko believes that Apple has reached the performance limit with its current iPhone design. “I don’t think they’ll increase [performance] much until another design comes out,” he said.

The other major change to the iPhone with the 3G S is a more capable graphics processor. While last year’s GPU (graphics processor unit) was the Imagination Technologies’ PowerVR MBX-Lite, this time Apple used that company’s PowerVR SGX. The biggest boon, said Vronko: 3D graphics rendering.

“Not only is this a faster GPU, but there’s hardware in the GPU that the old one didn’t have,” said Vronko, “including 720p video native support, so they can support 3D rendering. The old GPU could do some basic rendering, but now you have a much more robust rendering capability that can support a real mobile gaming platform.” It also means that the iPhone 3G S could be the gateway to a HD media platform in the near future. 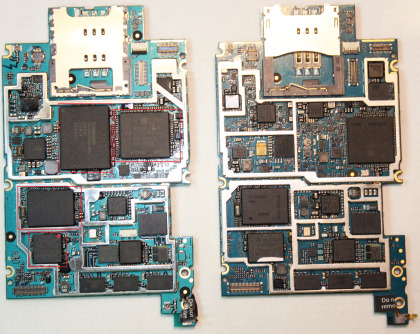 The improved graphics and video may come into play later this year when Apple refreshes the iPod Touch, which has used a nearly-identical design. Apple’s marketing has aggressively pitched the iPod Touch as a game-playing device, for example.

“I think they absolutely will stick to the same design with the Touch,” said Vronko, who expects Apple to update that iPod in September, traditionally the month Apple upgrades the line, or maybe even sooner.

Apple also bumped up the system memory in the iPhone 3G S, from the 128MB of the iPhone 3G to 256MB. “That means they really can consider doing some multitasking capability,” said Vronko, talking about the background processing that the iPhone current lacks. The iPhone has been dinged since it debuted for its inability to run more than one application at a time. Apple, which has said it based its decision on power consumption issues, has bent a bit by adding what it calls “push notification” to the iPhone 3.0 software.

“I think it’s more on the hardware side that Apple’s decided to not do multitasking,” said Vronko, “not the battery. I don’t think running two applications [at the same time] would really make much of a difference in the battery life.”

The rest of the iPhone 3G S is nearly identical to last year’s iPhone 3G, Vronko noted. “The modules were in the same places and attached the same way, with a couple of exceptions, so it’s clear that Apple is happy with the design,” said Vronko.

That also means that Apple’s profit margin is likely even higher on the new model, since it’s probably already amortized the design costs. “The cost per unit is lower than it’s ever been,” said Vronko, who acknowledged that he hasn’t yet done a cost-of-goods analysis of the parts uncovered by his teardown. “But I’m convinced that Apple is making money hand over fist on these.”

It’s also likely that the iPhone 3G S is the last in the original design line. “I don’t see anything too revolutionary here,” said Vronko. “They’ll need a totally fresh design going forward,” he added, “if they want to move forward.”

As to that, what, if anything, did he see from the teardown that might hint at Apple’s future plans for, say, a “tweener” device between the $299 iPhone and the $999 MacBook? Not much, said Vronko. “There’s not a lot here that would suggest the current design could support something like an ultra-small PC or netbook.”

Apple has repeatedly said it’s not interested in the netbook category, but most analysts have come around to the idea that the company must, and will, play in that market, perhaps with a tablet-like device that’s akin to an iPod Touch “on steroids,” as Ezra Gottheil, an analyst at Technology Business Research has put it.

Vronko plans to continue to pull apart the iPhone 3G S to ferret out more information. “I still haven’t found what powers the digital compass,” he said.