Five years after unveiling its first iPhone, Apple is finally getting around to releasing its first ever mapping solution.

The mapping features in the original iPhone were provided under apartnership Apple struck with Google for that particular device. Now,as Macworldexplains in its hands-on product review, Apple’s very ownMaps app is available as part of the new iOS 6 operating system.

What’s new in this app compared with the old Google Maps feature thatused to come with iOS? It’s integrated with Yelp and has lots of 3Dviews,live traffic and construction reports and turn-by-turn directions. 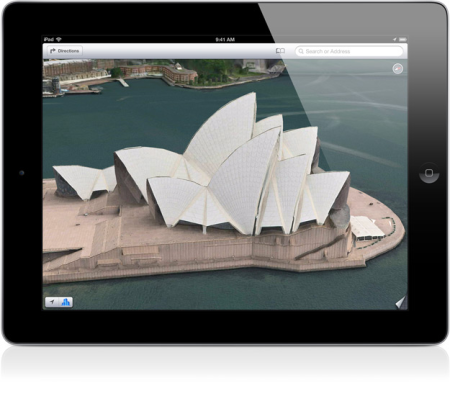 The 3D mode lets you see an angled version of the street, hybrid orcity map. Some cities like London, Sydney or New York even have 3Dvector satellite images of their buildings so you can do a virtualswoop over the Sydney Opera House. Macworldwrites that Apple has plansto expand this 3D modeling to other cities eventually.

And the new traffic alert feature uses crowdsourced data to give youmore accurate and up to date information about any delays along yourroute.

With Google Maps so pervasive (and already widely in use for the pastfew years) it’llprobably take some Apple device users a while to get used to the newiOS Map app.

Christine Wonghttp://www.itbusiness.ca
Christine Wong has been an on-air reporter for a national daily show on Rogers TV and at High Tech TV, a weekly news magazine on CTV's Ottawa affiliate. She was also an associate producer at Report On Business Television (now called BNN) and CBC's The Hour With George Stroumboulopoulos. As an associate producer at Slice TV, she helped launch two national daily talk shows, The Mom Show and Three Takes. Recently, she was a Staff Writer at ITBusiness.ca and is now a freelance contributor.
Previous article
Radian6 technology powers Salesforce.com Marketing Cloud
Next article
New accelerator for wireless SMBs coming to Ontario