The global growth in paid search engine marketing (SEM) is slowing down at the expense of mobile advertising, according to a new report by Adobe Systems’ Digital Index division.

The study also discovered that advertisers were spending more on reaching consumers through their smartphones, with mobile spending representing 37 per cent of all search engine marketing expenses in the fourth quarter of 2015 – a 23 per cent increase from the same period in 2014.

Becky Tasker, Adobe Digital Index (ADI)’s managing analyst, attributed both changes to the increasing amount of content that consumers are viewing on their mobile devices, with mobile browsing now accounting for 41 per cent of all site visits. She also noted that the cost per click is lower for mobile phones than for desktop systems.

“The percentages are really close, which indicates to me that advertisers are becoming more aware of what consumers are doing, and they’re trying to align their marketing efforts accordingly,” Tasker said.

Unfortunately, mobile clicks translate into purchases at a lower rate than desktop clicks, which means marketers need to account for a larger gap between traffic and conversion when optimizing their SEM efforts, Tasker said.

In addition to clickthrough rates and SEM spending, ADI’s researchers compared the two giants of display advertising – Facebook’s news feed and Google’s Display Ad Network – and discovered that Google is starting to close the gap between itself and Facebook. The former’s clickthrough rate increased by 27 per cent between the third quarter of 2014 and the third quarter of 2015, while the latter’s increased by 36 per cent during the same period, thanks to Facebook’s more effective optimization efforts, Tasker said. However, Google’s clickthrough rate rose by 219 per cent quarter over quarter, while Facebook’s rose by a comparatively small 77 per cent, according to the report – creating a very real possibility that Google will soon catch up with Facebook, Tasker said. 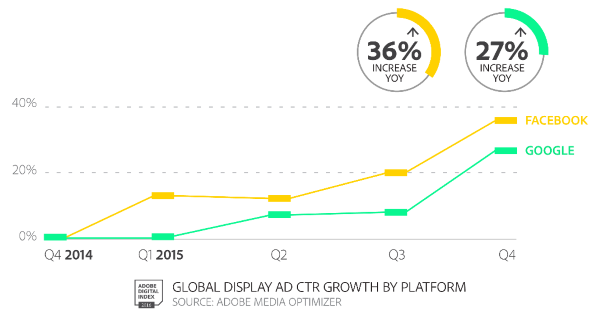 To create the report, ADI researchers analyzed anonymous, aggregated consumer data from North America, Asia Pacific and Europe that was collected between the fourth quarter of 2014 and the fourth quarter of 2015. Sources included more than 400 billion digital ad impressions from search engines and social platforms including Google, Facebook, and Yahoo, and consumer activity on more than 4000 sites across multiple industries including auto, finance, retail, and travel.

Eric Emin Wood
Former editor of ITBusiness.ca turned consultant with public relations firm Porter Novelli. When not writing for the tech industry enjoys photography, movies, travelling, the Oxford comma, and will talk your ear off about animation if you give him an opening.
Previous article
Canadian businesses would like to see more Bitcoin use, survey finds
Next article
3 surefire ways to make Google ban your ad