It’s the age of the smartphone, and mobile usage is not expected to slow down any time soon.

In fact, according to Forrester Data, mobile device usage across the globe is expected to surpass 5.5 billion users by 2022 – almost double the number of users in 2008 (2.8 billion). The research company attributes much of this mobile saturation – 70 per cent of the world’s population will be connected – to the rising mobile adoption in regions such as Asia Pacific, Latin America, and Africa, as well as low-cost smartphones on the market. 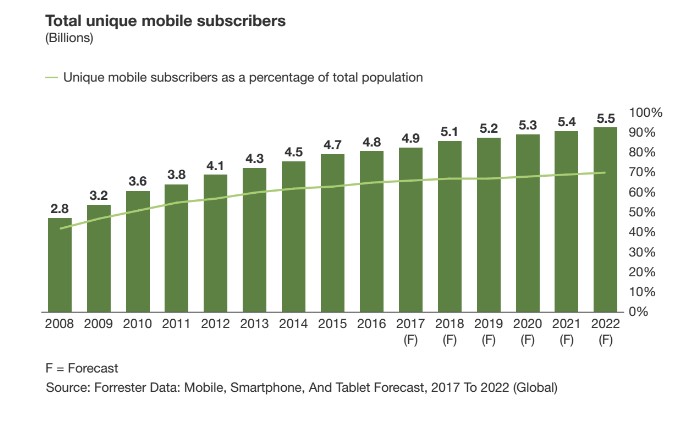 It should come as no surprise that North America and Europe remain the regions with the highest penetration of mobile users in 2016.

Of those 5.5 billion global users, smartphone owners will make up almost 70 per cent of the total mobile market, increasing to 3.8 billion users within the next five years, Forrester says. This year saw smartphone penetration surpass the 50 per cent mark, a significant leap from just 21 per cent in 2013.

Forrester also notes that almost 94 per cent of smartphone owners use either Android or iOS, with Android controlling almost 73 per cent of the market share (with more than 1.8 billion users in 2017, and Apple capturing approximately 21 per cent).

Related Stories
Canadians’ mobile app use grew by 74% in 2016, Yahoo subsidiary reveals
Mobile marketers must adapt to users, not the other way around, Forrester says

Big phones will be the death of the tablet

The mobile report highlights how smartphones with large screens, generally considered anything bigger than 5 inches, are causing a decline in the purchase of tablets. Globally, the tablet installed base is expected to decline at a compound annual growth rate (CAGR) of 1.1 per cent from 2017 to 2022, from 615 million in 2016 to 579 million in 2022, while the consumer-owned tablet installed base will decline at a 3.3 per cent CAGR.

However, the business-owned tablet installed base will grow by 6.9 per cent CAGR by 2022, mainly due to the rising adoption of the iPad Pro and two-in-one devices.

Mandy Kovacshttp://www.itwc.ca
Mandy is a lineup editor at CTV News. A former staffer at IT World Canada, she's now contributing as a part-time podcast host on Hashtag Trending. She is a Carleton University journalism graduate with extensive experience in the B2B market. When not writing about tech, you can find her active on Twitter following political news and sports, and preparing for her future as a cat lady.
Previous articleSay hello to Google’s new hiring management app
Next articleIt can’t write this story yet, but Microsoft has trained AI to win Ms. Pac-Man