Free photo, video and Web editing tools that make you look like a pro

A small business operator, quite often, has to be a “jack of all trades” – deftly juggling the skills of an accountant, communications guru, and full-on multimedia publishing expert.

But to accomplish key marketing tasks that require slick multimedia production, you either need to be a master of writing code or have deep pockets to pay for the software that enables the layman to do it more easily. For tasks such as graphical editing, video production, and Web publishing, many companies turn to Adobe products these days.

And with good reason. The company offers software tools for pretty much any multimedia creation task with its very broad ranging CS4 suite. Ever since buying up Macromedia, Adobe has offered an all-in-one package unparalleled in the market. Of course, all the functionality comes at a stiff price — and arming your business with these tools can be a heavy investment.

While quite often that investment may be a worthwhile one, there are times when you may only need a subset of the features offered by an Adobe product. If you think that paying out for the software isn’t justified by your lighter needs, then take a look at some of these free alternatives. In more cases than not, they would get the job done satisfactorily, with the end product turning out just as professional looking. 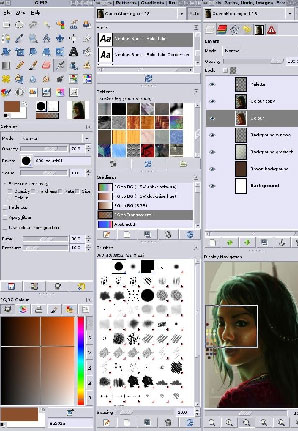 Even many casual computer users have tooled around with some version of Adobe’s prolific Photoshop software. Many would agree that it’s hard to hold a candle up to this image manipulation giant.

Still, for a free download, GIMP does a respectable job.

Photoshop users will be at ease with this interface. There are different menu docks you stack one on top of another, or break free and drag around the screen. Collapse the menus you don’t want to hog screen space down into tabs, and extend the ones you do need to see.

A toolbox offers up the familiar pointer, paintbrush, mask, and crop tools as well as the all-useful clone tool for touching up blemishes. Each tool can be customized in a sub-menu selection, similar to Photoshop’s granular functionality.

Photo editors will also appreciate the healing tool, which is in the spirit of the clone tool but requires just one click to intelligently touch up minor imperfections.

Tweak a picture’s brightness and contrast qualities, or open up the channel mixer tool for a more in-depth control set over the colouring, hue, and saturation. You can control a proper conversion to black and white with this feature.

The active open source community here means that there is an impressive group of volunteers who write tutorials and design plug-ins. When pressing F1 for help doesn’t cut it, there’s no shortage of help provided by the user community on the Web, and downloading plug-ins for GIMP will get you even closer to full-on Photoshop functionality.

For example, plug-ins enable numerous different effects you can apply to your images or the popular “Save for Web” feature.

This software is available for Windows, Mac OS X and Unix. It is compatible with various common image file formats including JPEG, GIF, PNG, TIFF and more thanks to the plug-in registry.

This is an unofficial continuation of the Nvu project from Linspire Inc., for those who’ve used that free Web editor before. Now taken over by an open source community, this WYSIWYG editor is based on the Gecko layout engine used in the Mozilla Firefox browser. That includes its treatment of XML, CSS and JavaScript.

That built-in engine means the editor is very reliable. There’s nothing worse than putting together a Web page and then uploading it to the Web, only to find out that your actual Web browser renders it differently.

Anyone who’s used Dreamweaver will find this software somewhat familiar. There are tabs to switch back and forth between the live preview editor and a source code editor. Editing multiple Web pages at once is made easy by another set up tabs.

There’s a frame on the left side that displays your site file structure and can connect directly with an FTP to update content directly online. An Explorer-style display shows the FTP site and all of its contents, plus the details.

Perhaps the most notable feature of KompoZer is its CSS editor. It writes very clean code and provides access to even little-known style sheet features.

Users can also view an outline of all their HTML tags to understand what elements are being used. 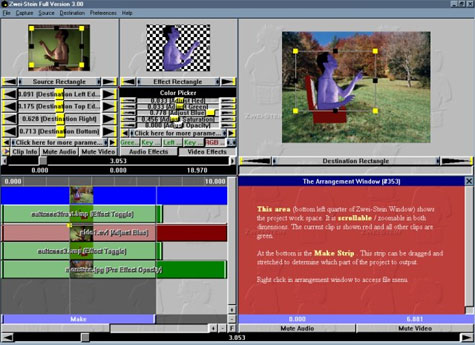 These days, operating systems come with some basic video editing software included. Apple’s iMovie and the Windows Movie Maker have both received accolades for their ease of use for those new to video editing. But small businesses often require something with a little more teeth – after all, you’re hoping to produce something more professional than a home movie.

From t@b, the ZS4 Video Editor is about as close as you’re going to get to a professional video editor without paying. It isn’t really fair to compare it to Premiere – as it doesn’t have the capability to capture video from a camera or tape deck for example. But if you have some video that you want to manipulate, then you can do some very nice work with this program.

Combine your video and audio tracks with images on an infinite number of A/V tracks. Then apply an unlimited number of effects to your video from a healthy list of special effects. The audio editing capabilities are pretty in-depth, with up to 16 channels per track.

Effects can be automated with key-frames and your video speed can be speeded up or slowed down.

It’s a non-destructive video editor. So don’t worry about cutting up those video files you input, they’ll all be left intact and only your rendered video file will represent the changes you’ve made.

ZS4 will be able to import many different AVI formats, WAV audio and JPG, PNG, or BMP images. If your video files aren’t the right format, t@b does offer a conversion tool for download.

If you’re new to video editing, don’t expect to feel comfortable when you dive into this software. The site advertises the program as valuing “choice over clarity” and “chaos over order” for the user interface.

But the Web site is chalk full of helpful tutorials on accomplishing specific tasks.

Most of the time you just need to open a PDF document and read it. But sometimes you want to do more – like comment on the file, draw diagrams directly on it, or export the text. The Foxit Reader is a great tool to both read and do some extra things with your PDF files.

Used by 50 million people, the software is known for its speed and small footprint. It allows you to draw graphics, highlight text, type comments and make notes on a PDF and then save this as a new document. Or convert the PDF document into a text file so you can edit that.

Fill out forms in a PDF and save that or print it, or play multimedia files in a PDF document.

Navigate PDFs with thumbnails that allow you to quickly scroll through the document and select a precise area of a page. A Firefox plug-in will give you all this functionality for PDF files you open from the Web too.

Downloading and installing the Firefox toolbar and allowing the program to update automatically will unlock a couple more free features.

You can get Foxit Reader for Windows, or on your Windows Mobile or Symbian smartphone.

Brian Jacksonhttp://www.itbusiness.ca
Editorial director of IT World Canada. Covering technology as it applies to business users. Multiple COPA award winner and now judge. Paddles a canoe as much as possible.
Previous articleAlphabet soup for the company’s soul
Next articleTwo super-fast operating systems that are great alternatives to Windows

Bitcoin gives small businesses ‘control of their own money’