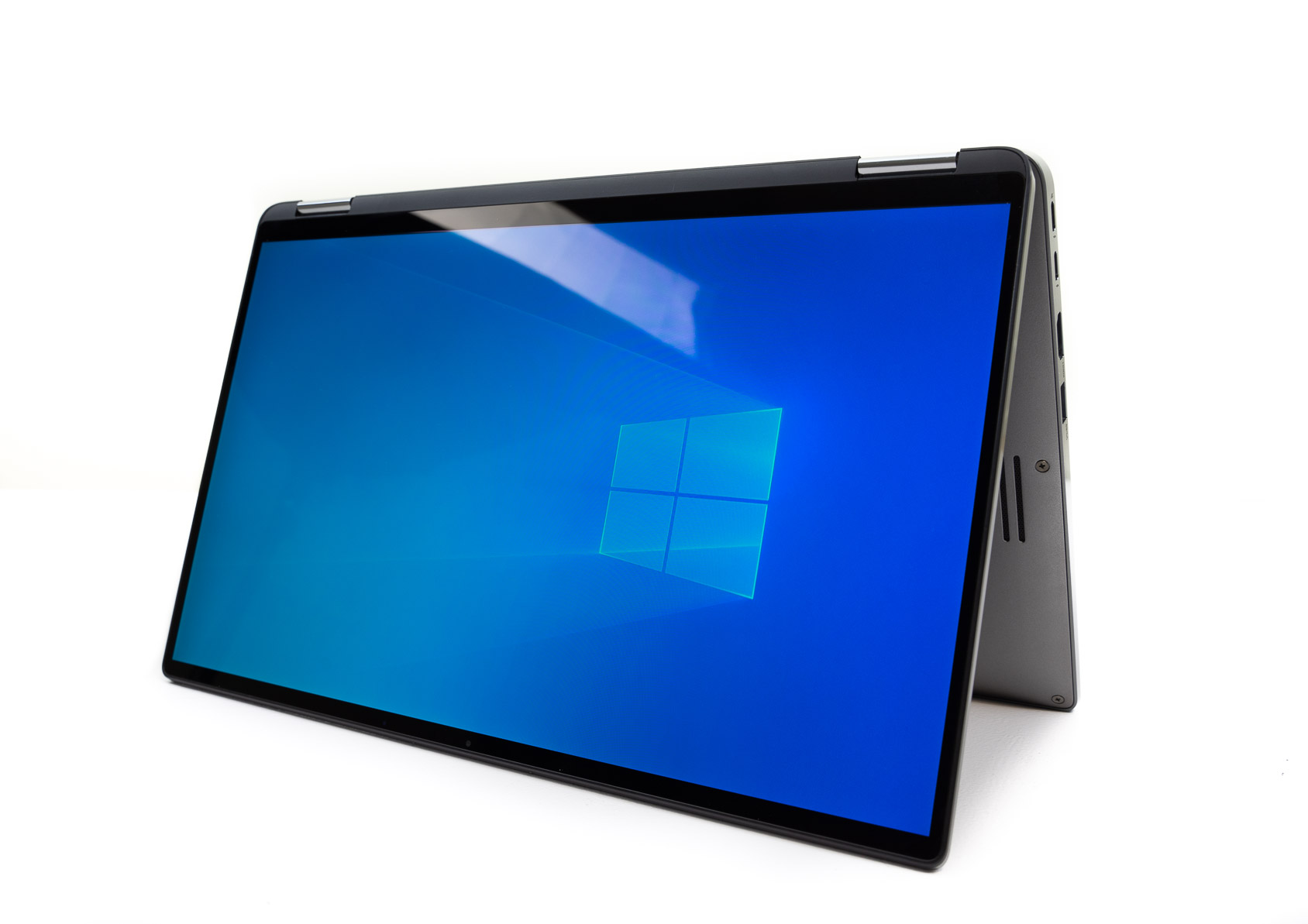 Physically, the Latitude 7400 2-in-1 feels as durable as a rock. And at 2.99lbs, it’s not overly heavy either. With posh brushed metal accents encircling its edges, it looks just lively enough to remind others that you still have a personality when you’re buried in work. 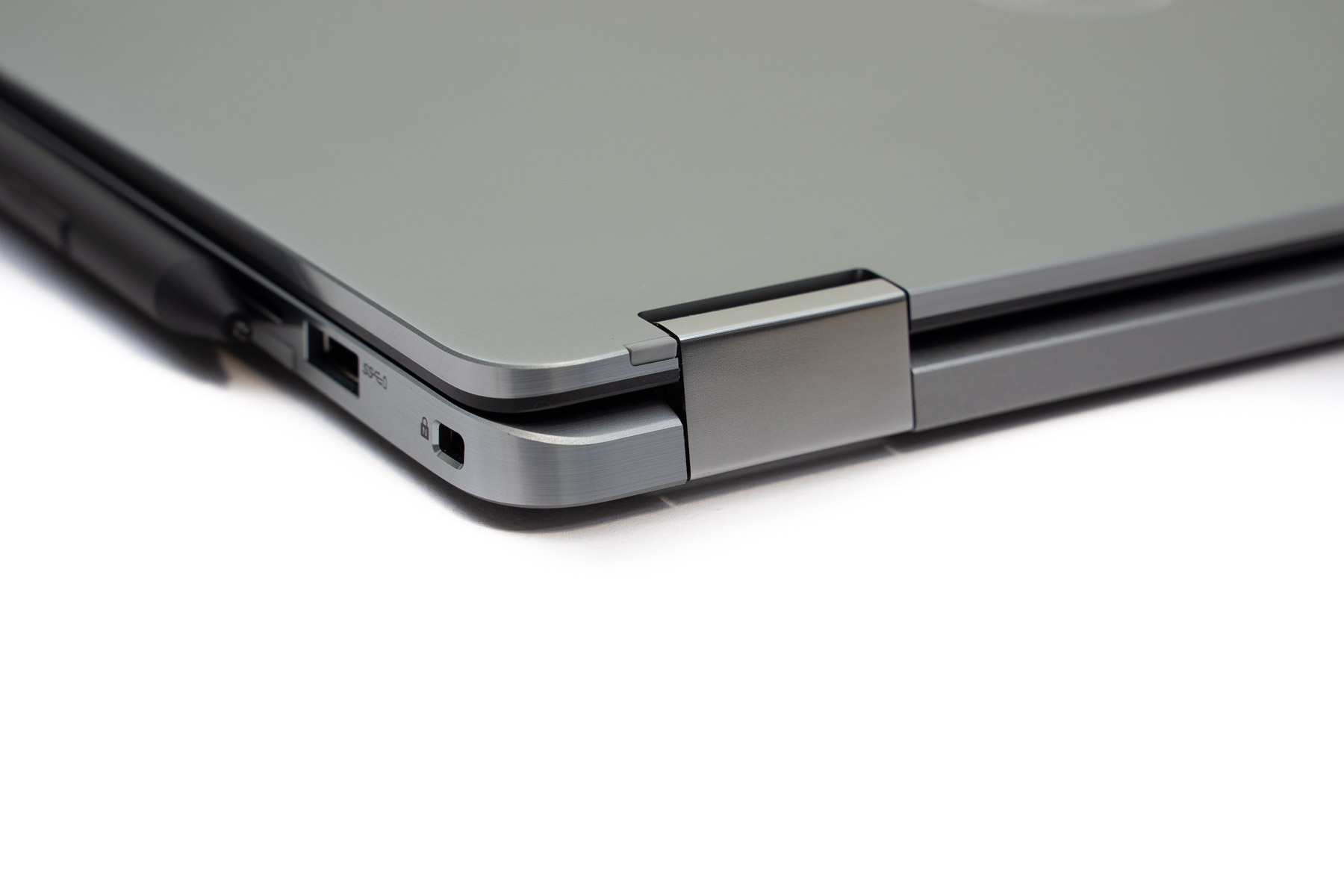 Most of the hot air is expelled through the rear vents.

A 14-inch IPS display is surrounded by an ultra-thin bezel. Despite the claustrophobic estate, Dell still manages to squeeze the webcam in the top bezel. The camera is compatible with Windows Hello, and even has a proximity sensor with Intel’s Context Sensing ability, which can turn on the display when it detects your presence and activate sign-in autonomously. 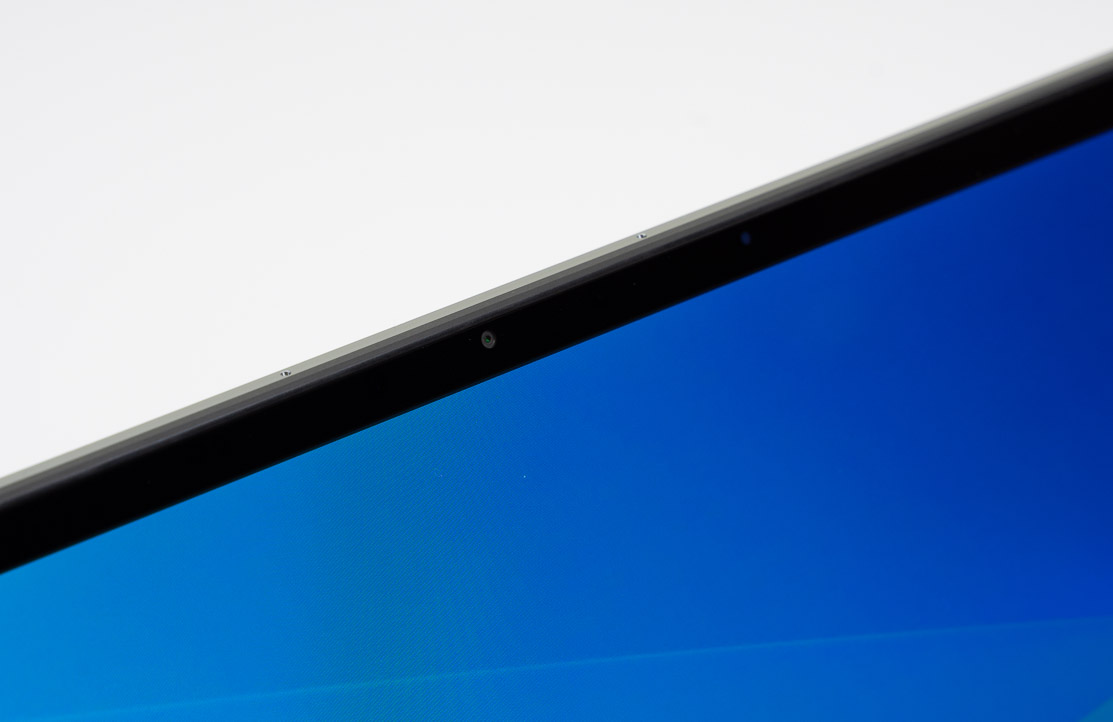 Since Dell Latitude panders to business and corporate use cases, it carries enough ports for two or three ultrabooks. The fingerprint sensor has been integrated into the power button on select models only. More on that in the ports section. 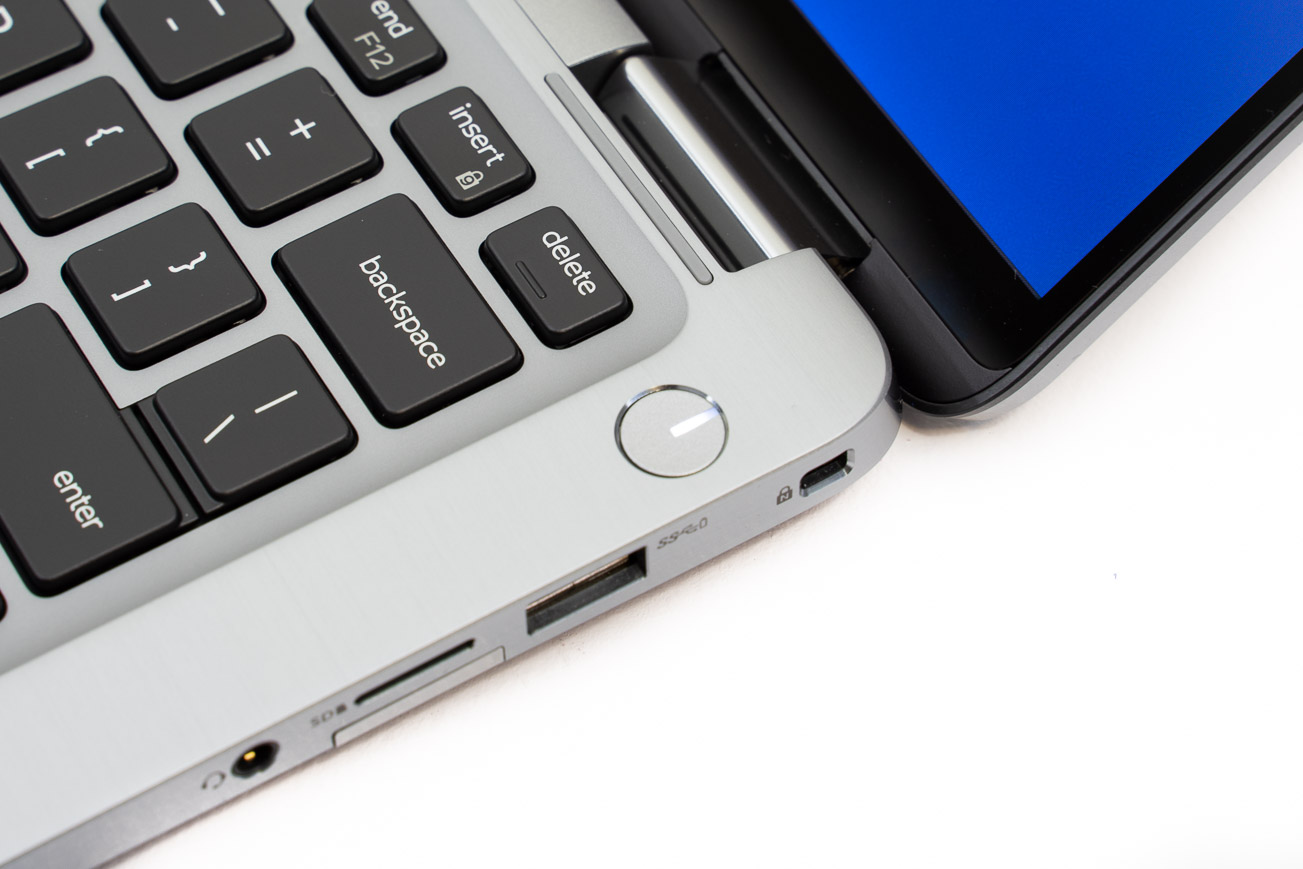 A good keyboard is indispensable for productivity. The Latitude 7400 2-in-1 has a standard ANSI backlit keyboard without bells and whistles–as it should be. 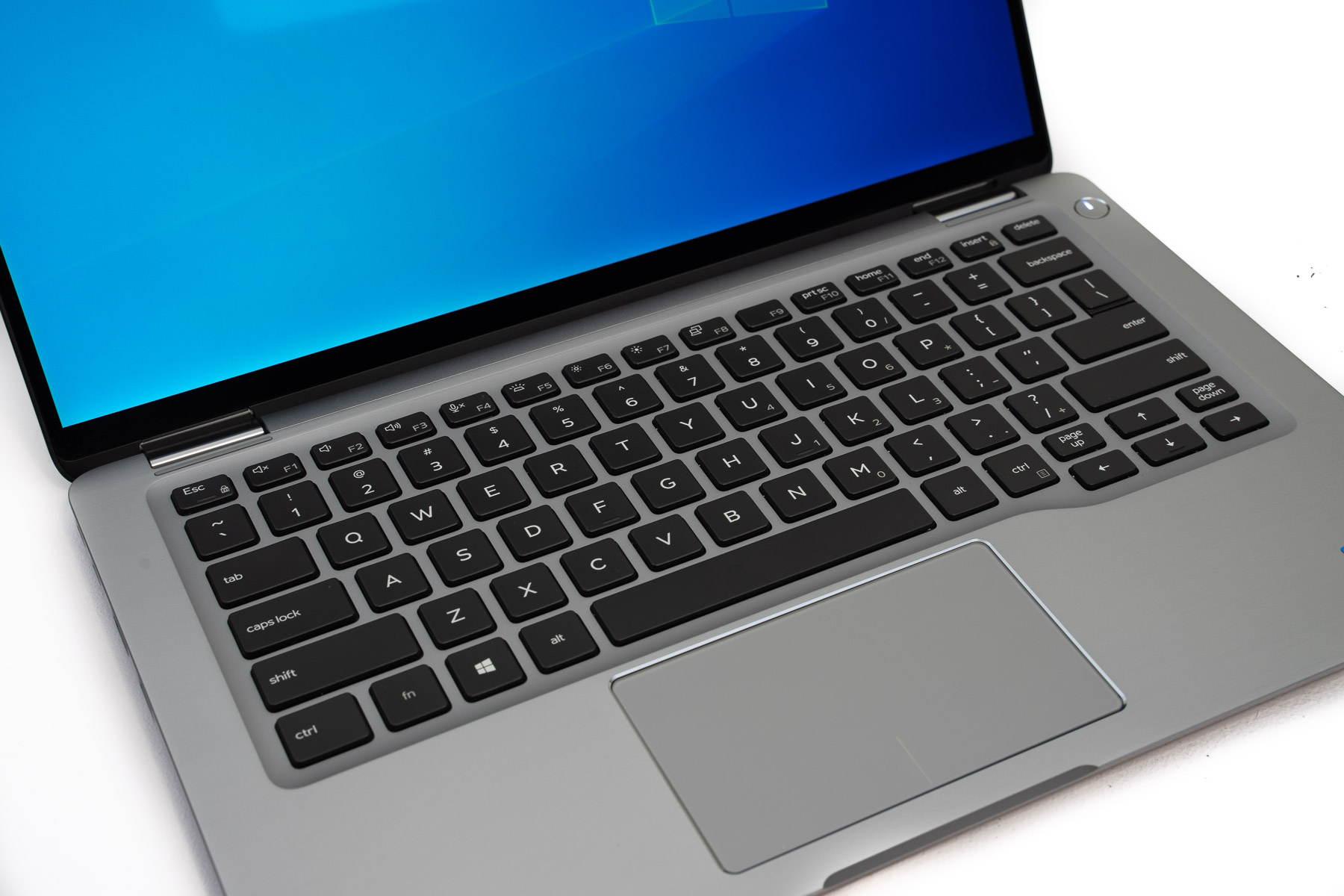 A pair of bottom-firing speakers blasts audio from the base. They’re adequately loud for small-room conferences, just don’t expect any euphoric renditions. 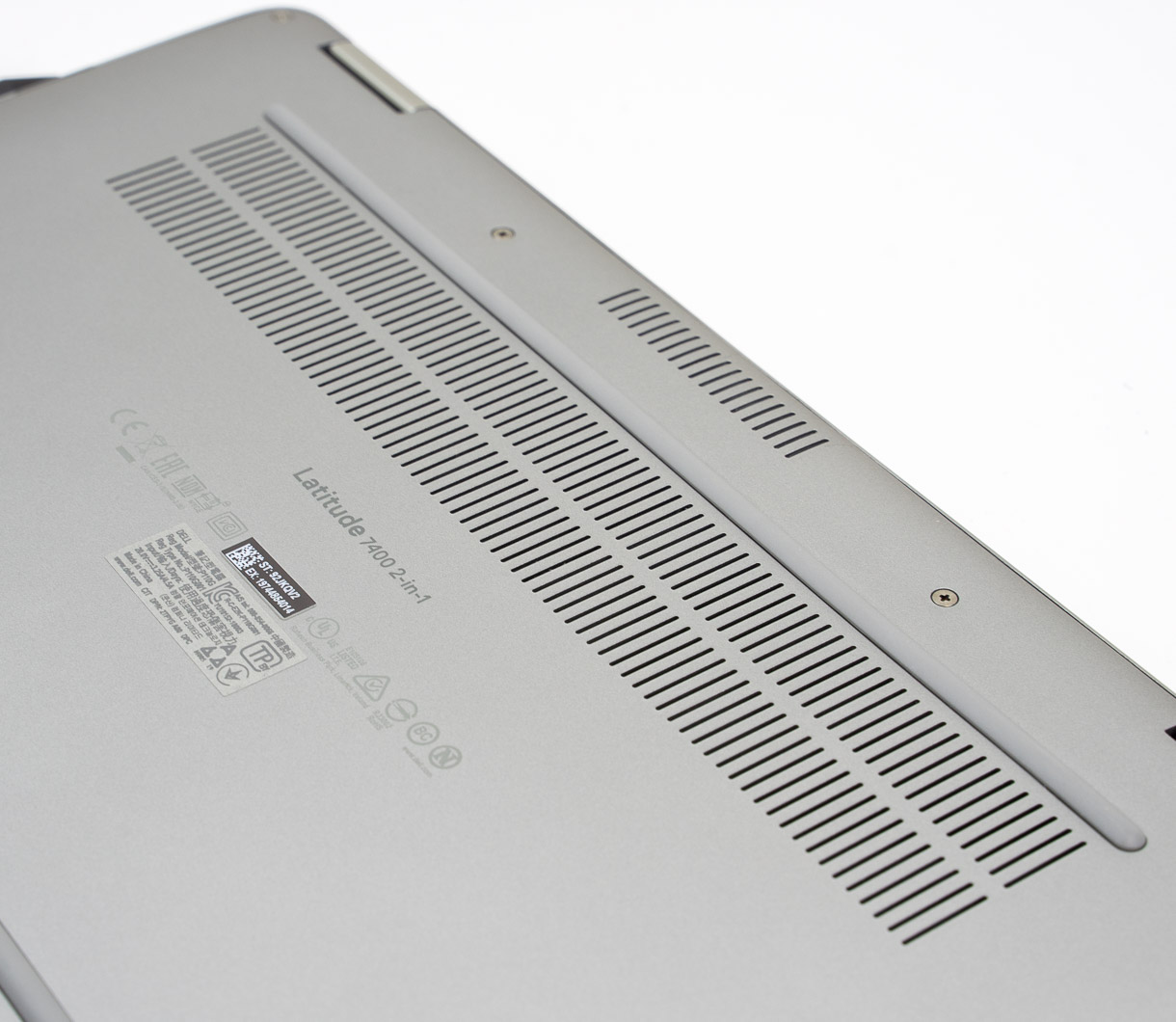 When the display folds beyond 110 degrees, the display slightly props up the base, perhaps as a way to improve typing ergonomics and increase airflow.

I was a bit let down by the display’s brightness. Although the 14-inch 1080p display sports great colors, it’s too dim to distinguish under direct sunlight. 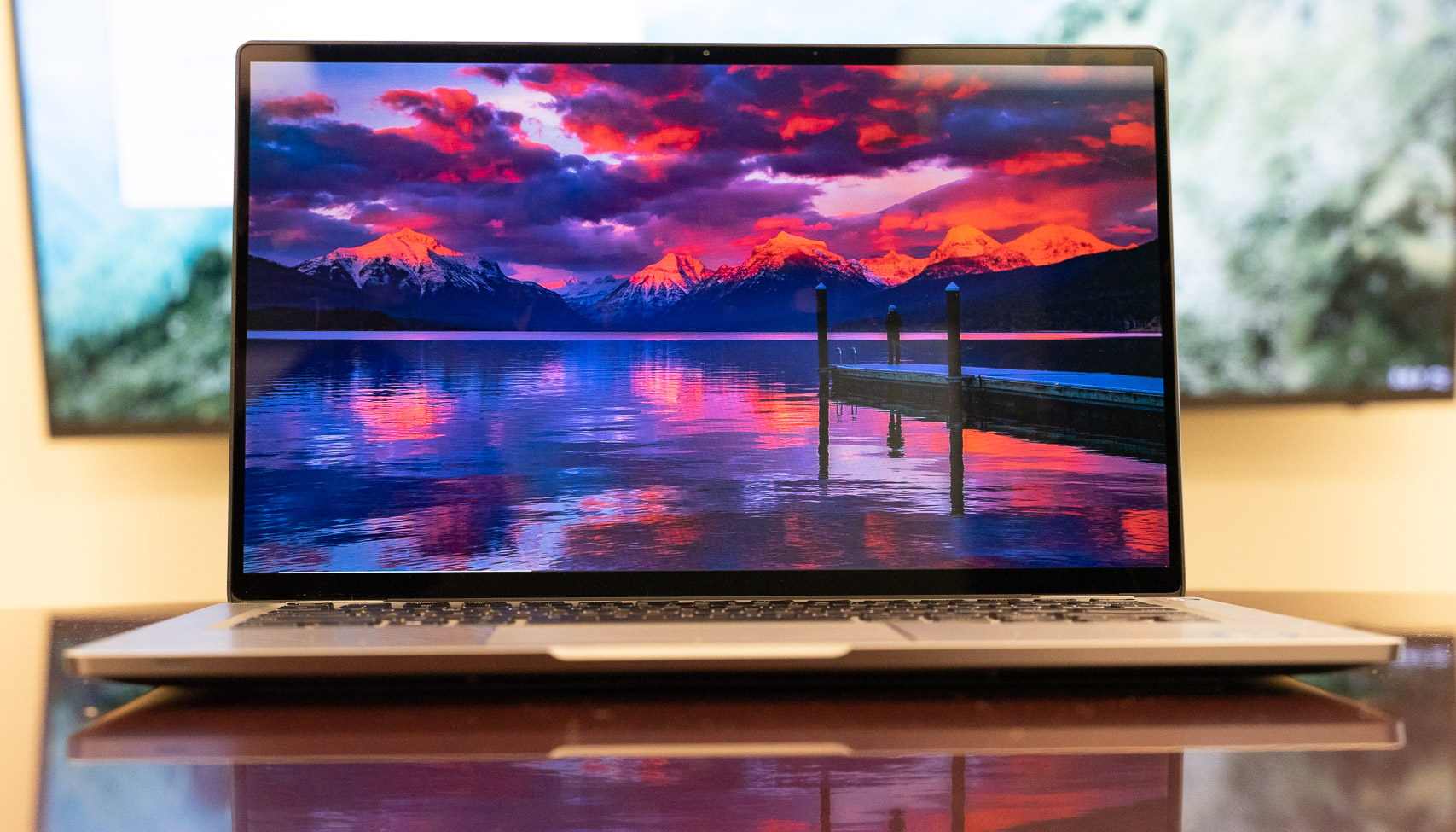 Auto brightness adjustment needs some work, too. The display would sometimes fluctuate between being too bright and too dim before settling in on the optimal setting.

The touchscreen is also compatible with an active pen with palm rejection. I was impressed at its sturdiness and stellar corner performance. The display did mistaken my wrist for pen input several times. 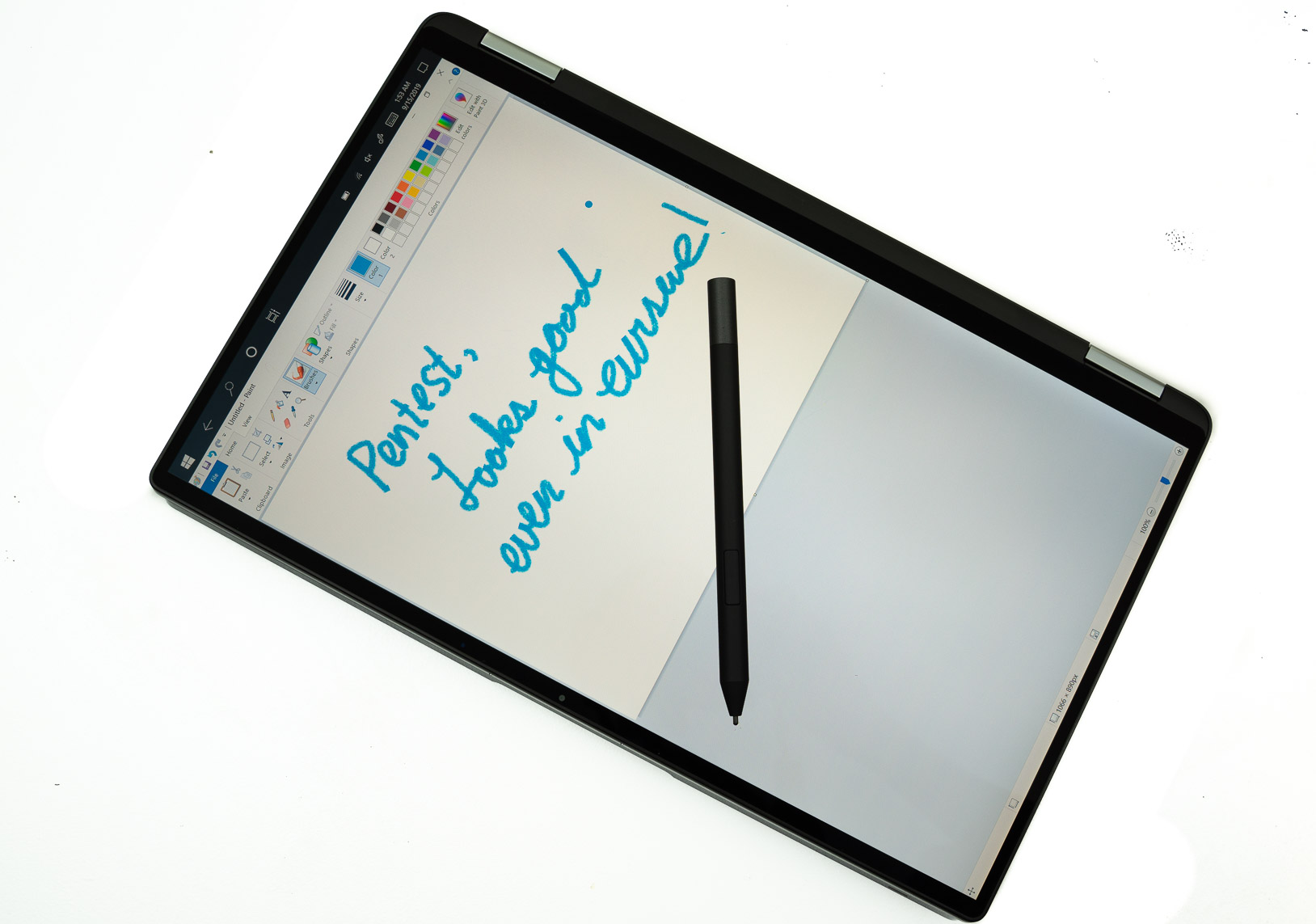 The pen snaps onto the side magnets when not in use. 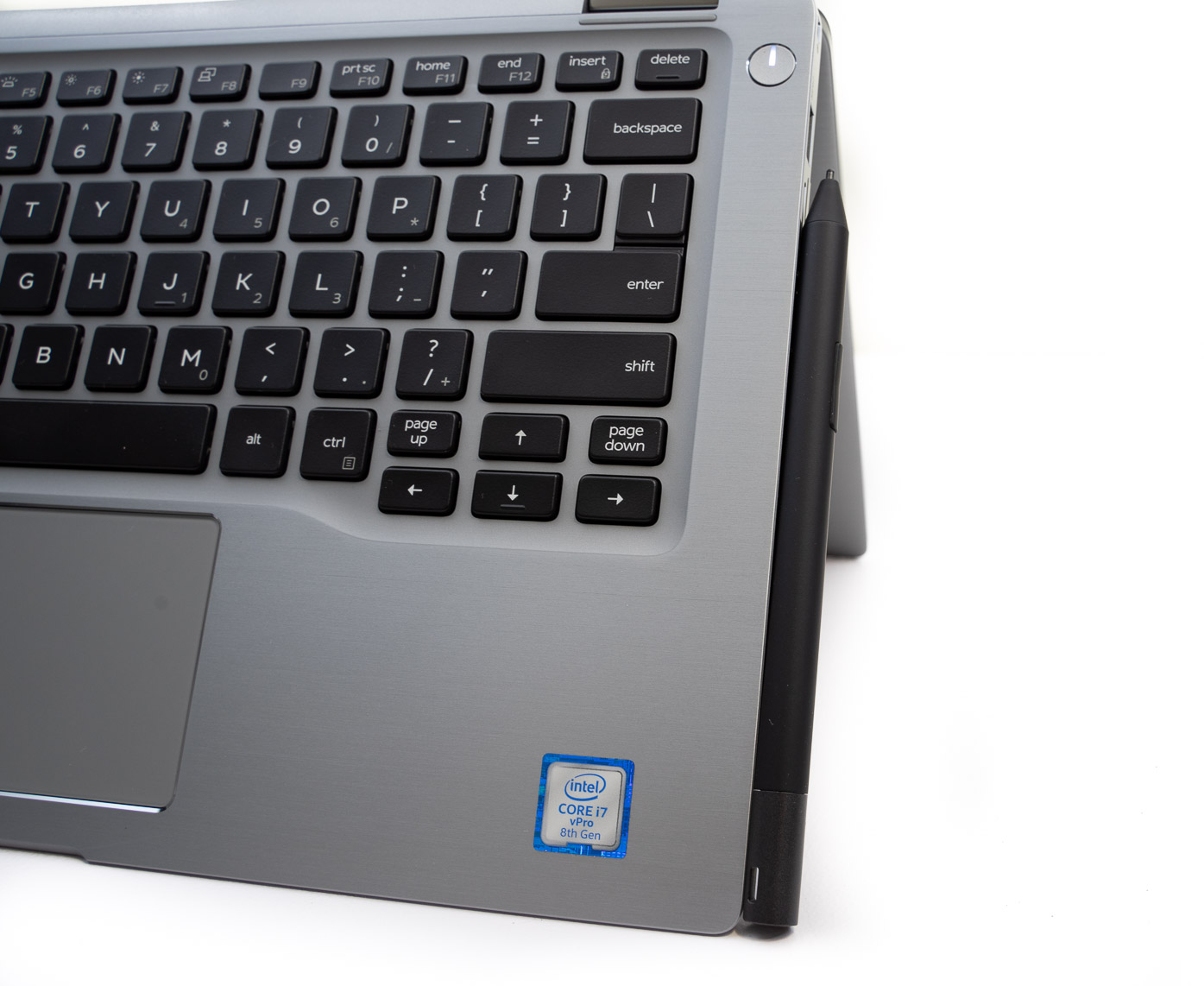 Our review unit sports the Intel’s Core i7-8665U, a quad-core processor that’s the successor to the Core i7-8550U. While they’re architecturally identical, the i7-8665U is manufactured on Intel’s more mature 14nm++ node, which enables more energy-saving and better performance. Because of the node improvement, Intel specifies that the Core i7-8665U can reach 4.8GHz turbo boost frequency compared to the i7-8550U’s 4.0GHz. All other components including graphics, memory controller, and cache hierarchy and size all remain the same.

Despite the supposed frequency boost, the Latitude 7400 2-in-1 scored identically to the Asus Zenbook S UX391 we tested a few months back, settling for a 596 average across three runs. Changing the Windows power profile to “Best Performance” didn’t make a difference, either. 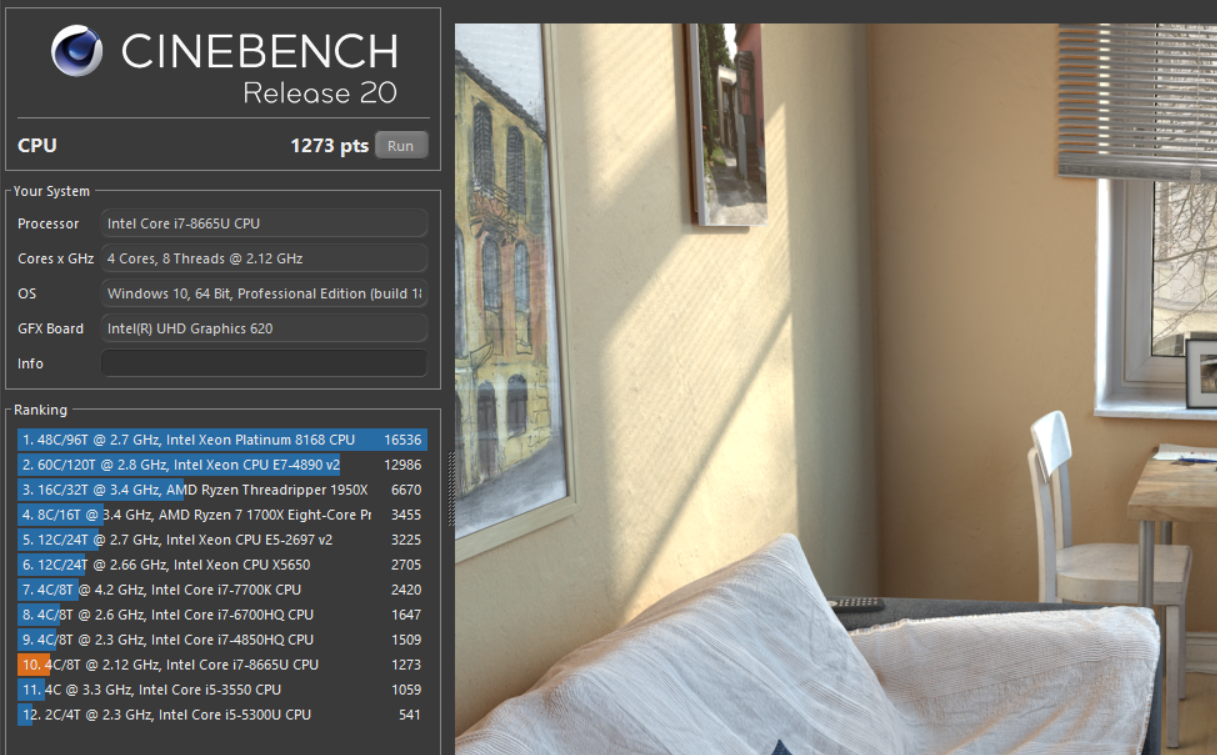 The Core i7-8665U’s 3D Mark score is slightly better than that of the Core i7-8550U thanks to higher processor performance. Since both chipsets use the Intel UHD 620, the difference between the graphics subsystems is negligible.

PCMark 10 evaluates overall system performance, and it’s here that we see a solid lead over the Asus ZenBook S UX 391. Much of the improvement comes from having a faster SSD, which greatly boosted the app start-up score. 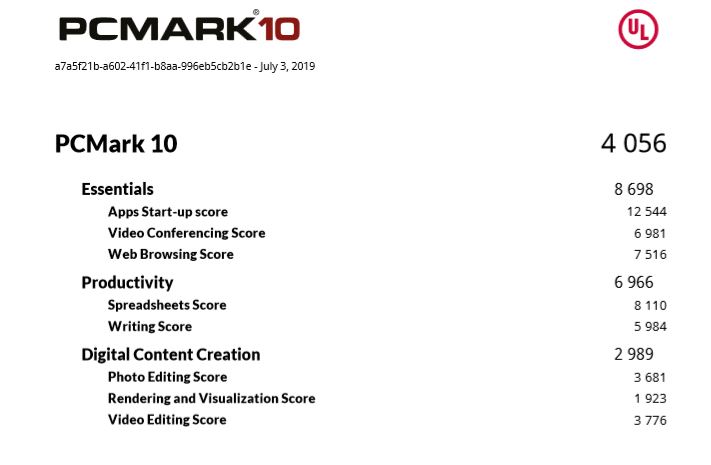 The SSD boasts excellent 4K random read and write speeds, the most relevant metrics for a general user. 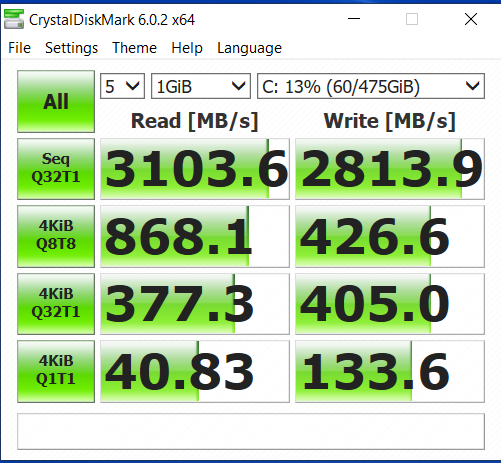 Uncovering the baseplate reveals that the processor is cooled by a tiny 1.06CMF fan attached to a wide heat pipe. Relative to the heat pipe, the heatsink is tiny in comparison, only stretching across the width of the fan. The SDD and can be easily detached by removing two screws. It also has its own thermal shield to mitigate throttling.

When tackling office productivity tasks, the processor hovered between 45 to 55 degrees–cool enough to type on comfortably. More demanding workloads like batch editing and spot removal in Lightroom raised its temperature up to 100 degrees, almost touching the Intel-specified maximum operating temperature.

Any unwicked heat radiates from the top left corner towards the keyboard area. When the laptop is under load, the area around the escape key becomes extremely hot to the touch. Think on the level of a cup of hot tea in a ceramic mug.

The fan is in no hurry to increase its speed, however. Fan recordings in AIDA 64 showed that the fan topped out at around 7000RPM. Even working at its peak, the fan is extremely quiet. It’s almost as though that the Latitude 7400 prioritizes silence over maintaining performance.

Dell quotes officially quotes the battery life to be 26 hours and 46 minutes for the 78Wh model. It, of course, never reaches that milage in real-world use, but its massive 78Wh battery still easily lasts an entire day and a half without begging for the outlet. Moreover, the battery charges using a beefy 65 W USB-C charger, which needs about 1.5 hours to reach 100 per cent from empty. The battery does heat up quite a bit during charging, however, so keep it in a well-ventilated area.

As much as I love razor-thin ultrabooks that can slice my backpack in half, I also love an abundant port selection. Being a business laptop, the Latitude 7400 2-in-1 scratches my port itch with two USB-C Thunderbolt ports, an HDMI port, two USB-A ports, an external microSD card slot, a microSIM card slot, and a headphone jack. Dell also offers an optional Qualcomm Snapdragon X20 LTE-A broadband card. 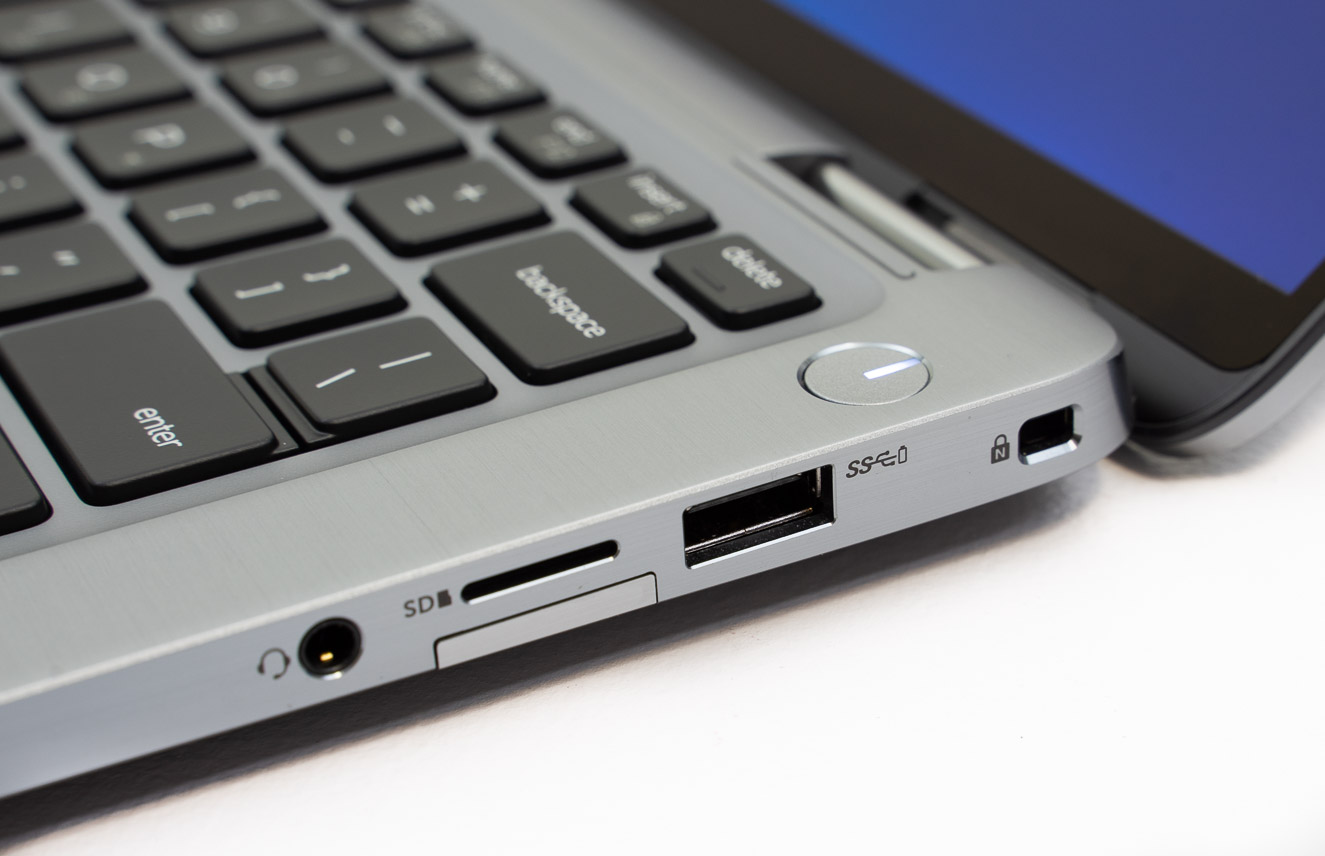 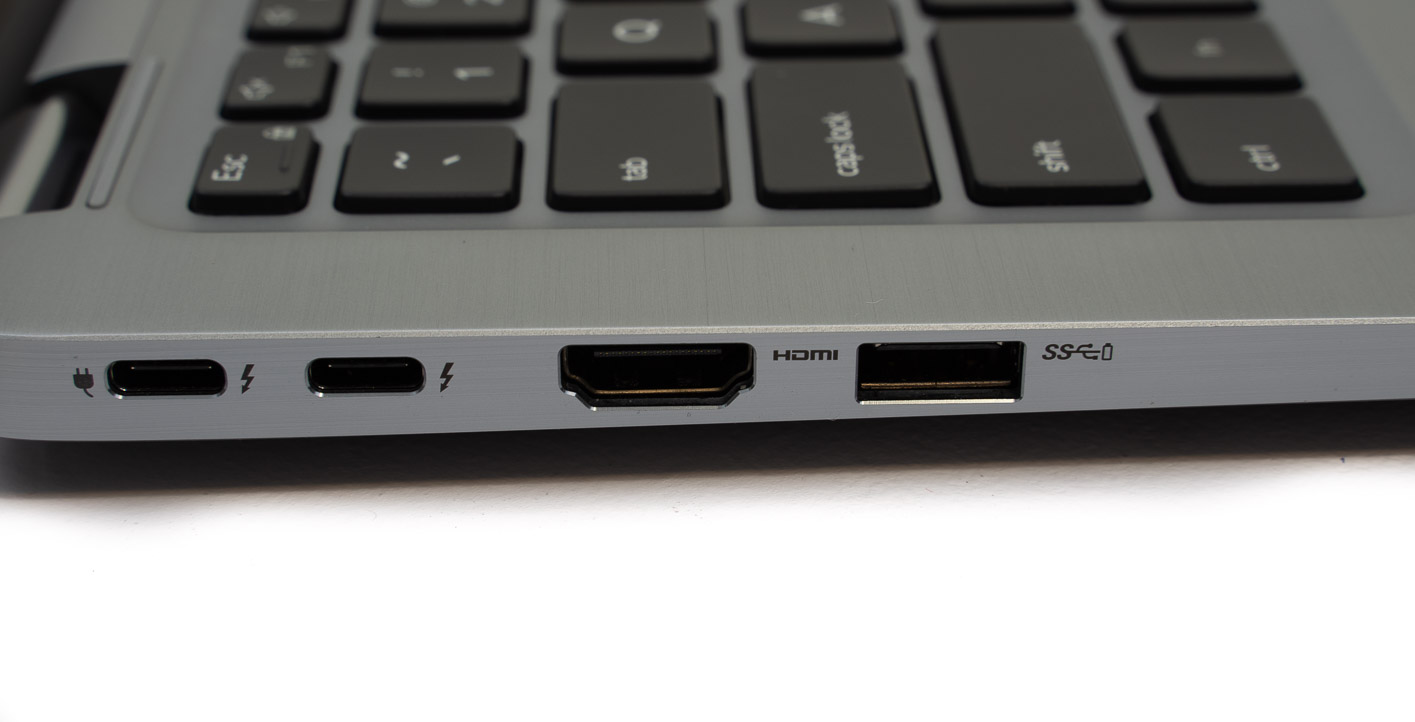 Depending on your needs, Dell offers numerous customizable security options including a smart card reader, touch fingerprint reader, and NFC. Unfortunately, selecting any of these options means cutting the battery capacity from 78Wh to 52Wh.

Without a doubt, the Latitude 7400 2-in-1’s keyboard ranks as one of its top features. There’s plenty of separation between each key to indicate to the typist when sliding from one key to the other. The keys themselves are stiffer than most other laptop keyboards, but are springy and silent–perfect for an open floor office plan. The plastic keycaps are decently fingerprint resistant, too. Overall, I’m extremely impressed by the keys and had no problems typing on the unit for hours on end.

Supplementing the excellent keyboard is a mostly-reliable glass trackpad seated in a commodious palm rest. The trackpad sensitivity isn’t the best we’ve seen, but the smooth glass surface and supremely responsive buttons mitigate that to a degree.

Before we dig into pricing, keep in mind that the Latitude 7400 2-in-1 is designed for corporate wallets. Thus, it starts at CA$1,849, and costs $3,909 when fully decked out with an Intel i7-8665U vPro processor, 16GB of RAM, 1TB SSD, and 78W battery. And that’s without any security add-ons, which would tip it over the $4,000 mark. The price includes three years of on-site service and remote diagnosis.

With an attractive design and impeccable build quality, the Dell Latitude 7400 2-in-1 earns my wholehearted recommendation. If you end up with one in your lap, then be rest assured that it’s one of the most refined Windows laptops available. Those looking for a robust business machine to crush through your daily load of documents will fall in love with its supreme keyboard. Moreover, its large 78Wh battery life will keep it humming for a full day. That being said, tacking on extra security hardware considerably shrinks the battery size, a compromise I deeply frown upon.

Tom Li
Telecommunication and consumer hardware are Tom's main beats at IT Business. He loves to talk about Canada's network infrastructure, semiconductor products, and of course, anything hot and new in the consumer technology space. You'll also occasionally see his name appended to articles on cloud, security, and SaaS-related news. If you're ever up for a lengthy discussion about the nuances of each of the above sectors or have an upcoming product that people will love, feel free to drop him a line at [email protected]
Previous article
Hashtag Trending – Google voice data privacy; gaming scholarships; Apple to retain Mac Pro production in the U.S.
Next article
YouTube brings its ticketing feature to Canada