They share more information online, and expect it to have more of an impact. They would like to see AIs that can act as teachers, medical advisors, companions, and personal assistants, and look forward to the day they can install implants into their bodies to augment their vision and memories.

Who are “they”? The smartphone users and consumers surveyed in this year’s edition of the Ericsson ConsumerLab’s “10 Hot Consumer Trends” report, released Tuesday by the Swedish telecommunication giant. As it had in previous years, ConsumerLab combined data from multiple studies throughout the year with original research to identify 10 patterns in how consumers across the world expect everyday networked life to evolve in the near future – something IT developers may want to keep in mind as they consider projects for 2016.

“We’re not engineers… so we’re not saying we know how the technology for all of this would work out,” the ConsumerLab’s head of research, Michael Bjorn, said in discussing the report. “We’re just trying to find out what people find interesting.”

Even the report’s narrowest segment is substantial, with one trend, the “netizen journalist” – led by the fact that 34 per cent of smartphone users say that when they have a bad experience with a company, they share it, and that 29 per cent read about bad experiences others have posted – representing 46 million urban smartphone users in 10 major international cities. The broadest trend, “the lifestyle networking effect” – that four out of five consumers increase their use of a particular online service when they see others use them – represents 1.1 billion people across 24 countries.

“The reason we focused on major cities is that this trends report is focusing on the future,” Bjorn said. “People in cities are more likely to be ahead of the curve, and a good audience to talk to if you want to understand what’s trending.”

But it’s the netizen journalist, rather than any device-based trends, that Bjorn said IT developers should focus the most on.

“This idea that people are aware that they are not only sharing more information than ever before, but they’re also looking at what other consumers are sharing… and that they actually expect this to have an impact on not only society but on companies as well,” he said. “I think that’s an important thing to think about when we talk about the future of developing technology, or services, or other products… this idea that it could be a more interactive process where consumers will expect to have more of a say.”

Below, some highlights from this year’s trends report: 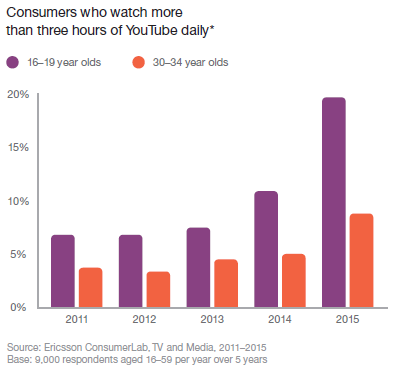 One trend that older generations might expect, yet still be surprised by, is just how much time what the study calls “streaming natives” spend watching videos online.

These streaming natives are also more likely to watch video on different platforms, with around 28 per cent of their total viewing time spent on smartphones. They are also the only age group who spend a larger amount of time on smartphones than on any other device. 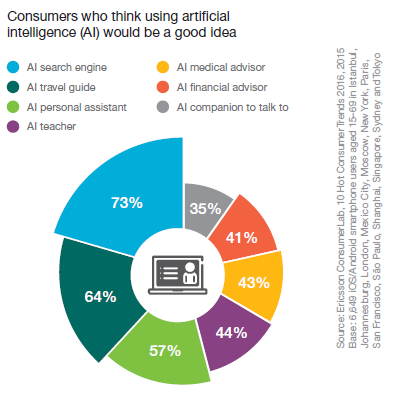 Another trend was “AI Ends the Screen Age,” in which researchers presented consumers with a list of potential uses for AI, then asked whether they believed each would be a good idea.

“We started off with looking at what our current smartphones are actually offering,” Bjorn said. “So you already have a kind of AI emphasis for search and travel guides and personal assistants and so on.”

Predictably, the demand for AI search engines, travel guides, and personal assistants – all functions carried out to one extent or another by existing apps – topped the list, though some might be surprised by the number of people who would like to see it applied to medicine. According to the report, a third of consumers would trust the fidelity of an AI interface over a human for “sensitive matters,” while 29 per cent agree they would feel more comfortable discussing their medical condition with an AI system.

While initially shaping the research that led to the trends report, Bjorn didn’t expect virtual reality to be a component.

“During various projects throughout the year… sometimes things pop up that we can’t use in a particular piece of work, but think it could be potentially interesting to ask about,” he said.

And so the ConsumerLab began asking respondents how they would feel about a range of VR services, discovering that eight out of 10 consumers believed at least one of the company’s 12 suggestions, including VR maps, movies that play virtually around the viewer, and video calls with participants surrounding the consumer, was “a very good idea.”

But the most popular suggestion, interestingly enough, was having a 3D selfie that can be used as an avatar to try on clothes online.

According to the report, eight out of 10 smartphone owners would like to augment their senses and cognitive abilities with technology – what Ericsson called “internables” – with the most popular upgrades being vision, memory and hearing.

The company’s research also showed that one smartphone user in three would be “very interested” in implants that add Internet information to what they see and hear.

Perhaps the most fascinating takeaway from Ericsson’s research into consumer attitudes about hacking is that six in 10 smartphone users said their trust isn’t affected very much by hacks or virus attacks, with half saying they will continue using PCs and smartphones the same way they do today, even after they have been compromised.

The report suggests this might be because consumers feel they have no control over these issues, or find it hard to relate to them.

However, only 39 per cent of smartphone users said they will continue to use a social networking service normally once it has suffered an intrusion and, feeding every IT security department’s worst fears, only 18 per cent said their trust in an organization, product or service is reduced when it’s been hacked.

That said, 21 per cent of consumers also said their trust in an organization is increased when it successfully resolves a problem after being hacked or infected. 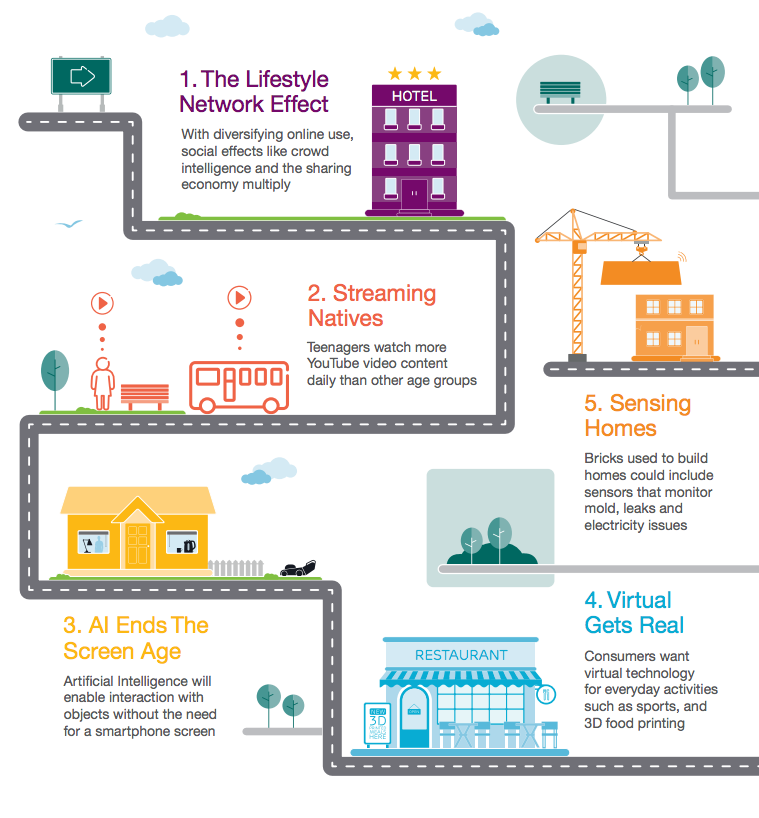 Eric Emin Wood
Former editor of ITBusiness.ca turned consultant with public relations firm Porter Novelli. When not writing for the tech industry enjoys photography, movies, travelling, the Oxford comma, and will talk your ear off about animation if you give him an opening.
Previous article
Learn coding fundamentals this week from the experts in Toronto and Vancouver – free!
Next article
Shopify and QuickBooks join forces with new integration