When marketers are deciding where to direct their online advertising spend, delivering ads to users that will find them relevant is a key consideration. And a new report from Adobe claims a clear winner has emerged.

According to Adobe Digital Index’s (ADI) Q3 Digital Advertising & Social Intelligence Report, Google’s recent release of Customer Match to help advertisers personalize display ads based on historic search data is a direct response to Facebook’s success. The report found that 51 per cent of consumers found Facebook’s ads more relevant than Google sites such as YouTube at 17 per cent or Google+ at six per cent.

Google’s CTR for display ads was also up, but by a comparatively lower 25 per cent. The report said programmatic media buying is likely sustaining their numbers, but it will be interesting to watch the impact of Customer Match. 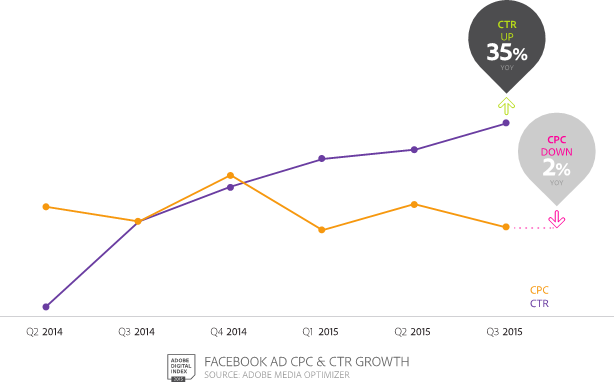 The Adobe report analyzed consumer activity on branded sites between Q3 of 2014 and Q3 of 2015, covering some 900 billion digital ad impressions from sites and platforms such as Google, Facebook, Bing, Yahoo, Twitter, Reddit, YouTube and LinkedIn.

While it’s not as sexy as other digital ad types, marketers are still increasing their spend – paid search spend in North America was up 17 per cent, year over year. Both Google and Bing saw 19 per cent growth in paid search spend in North America, but with Google owning 71 per cent market share, Bing isn’t yet threatening the search giant’s dominance.

When search data is examined by sector, retail led the way with year over year spending growth of nine per cent. Auto wasn’t too far behind at four per cent, although it has been trending steadily downward. Finance and travel also showed strength. 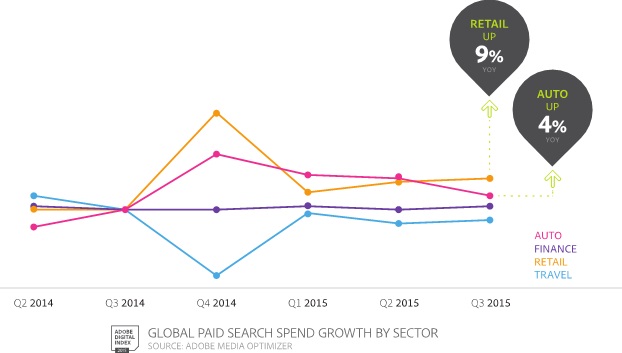 When it comes to social, Adobe sees increasing revenue-per-visit (RPV) for traffic from social platforms increasing across the board. Facebook recorded the highest RPV at $1.24, followed by Pintrest at 74 cents, Twitter at 60 cents and Reddit at 57 per cent.

“What is interesting is how fast Reddit is closing the gap with the other social platforms, given the difficulties they have been facing of late,” Matt Roberts, an ADI senior analyst, told CMO Blog.

Jeff Jedras
Jeff Jedras is a technology journalist with IT World Canada and a member of the IT Business team. He began his career in technology journalism in the late 1990s, covering the Ottawa technology sector for Silicon Valley North and the Ottawa Business Journal. He later covered the technology scene in Vancouver before joining IT World Canada in Toronto in 2005, covering enterprise IT for ComputerWorld Canada and the channel for Computer Dealer News. His writing has also appeared in the Vancouver Sun & the Ottawa Citizen.
Previous articleEight Canadian cities named to short list of world’s most intelligent communities
Next articleUGO Wallet hits milestone but Canadians slow to embrace mobile payments