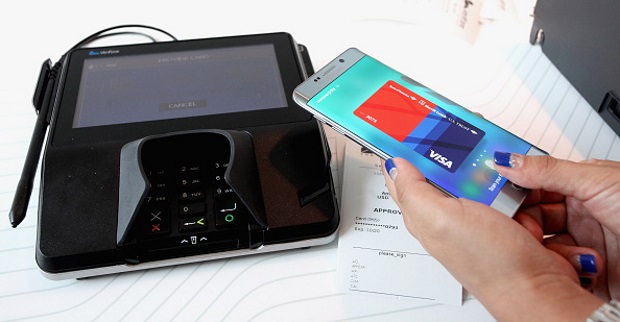 Samsung Electronics Canada Inc. and CIBC have announced a partnership that will give CIBC customers early access to Samsung Pay as it launches in Canada.

Similar to Apple Pay, Samsung Pay lets users make payments using their smartphones at any vendor that accepts credit cards. To make a payment on the app, users tap with their device, then swipe up, scan their fingerprint or input a four-digit PIN, and tap to pay.

However, unlike Apple Pay, Samsung Pay doesn’t rely on a tap to pay terminals completely. Both use near-field communication technology in order to process tap to pay payments, but Samsung Pay can also connect with older payment devices that rely on magnetic secure transmissions by holding the phone next to the older device.

The app is available today for CIBC visa cardholders, who can use it on compatible Samsung smartphones including the Galaxy S7 and S7 Edge, Galaxy S6, S6 Edge, and S6 Edge Plus, and the Galaxy Note5.

In a statement, Samsung called it “the first step” in bringing the full Samsung Pay service to Canadians.

Samsung Pay enters Canada at a slightly higher step than competitor Apple Pay did last year, when it launched in Canada with just the support of American Express cards. However, despite a five month setback, this spring, the five major Canadian banks all announced support for Apple’s mobile payment system.

One of the reasons for why RBC in particular delayed support for Apple Pay was that the bank was waiting for Apple Pay to support both debit and credit cards. With Samsung Pay only supporting visa cards at launch, it may take further credit and debit card support before other Canadian banks begin supporting the new mobile payment app.

Alex Raduhttp://www.computerdealernews.com
is a Video Producer for IT World Canada. When not writing or making videos about the tech industry, you can find him reading, watching TV/movies, or watching the Lakers rebuild with one eye open.
Previous article
Canadian offices not adapting quickly enough to new technology, Dell finds
Next article
Twitter was more key than ever in 2016’s U.S. election campaign