Many Canadians living in cities are paying among the highest prices in the developed world for their mobile phone service, but those subscribing to new entrants over incumbent carriers may get a break in many cases, a new study released today by the Canadian Radio-television and Telecommunications Commission (CRTC) shows.

The ninth annual price comparison study is prepared by Nordicity Group Ltd., with data based on surveys conducted in January and February of 2016. It examines price differences across a number of different categories, including mobile wireless telephony, fixed telephony, mobile Internet, and fixed broadband Internet. Prices from major Canadian cities are compared against those in cities in the U.S., Australia, U.K., France, Italy, Germany, and Japan.

So where are Canadians shelling out the most for services compared to urbanites around the world?

Wireless phone service. Canada’s cities see some of the priciest plans across all levels of service, as Nordicity illustrates with these charts. (Click for a larger image):

Canada ranks as the most-expensive in the most basic service level (providing 150 minutes of talk time), and as second-most expensive in every other category save for one. In some cases, Canadian prices are more than twice as expensive as what can be found elsewhere. For example, a wireless customer with a plan for unlimited voice minutes, SMS messages, and 5 GB of data pays an average of $96.55 per month in Canadian cities. But in the UK, it costs only $42.22 per month on average. (The U.S. is the only more expensive country, at $117.33 per month on average.)

Looking at pricing trends organized by service level and city are more varied. While the most basic service level (Level 1) increased in every city since last year, there was a uniform decrease for Level 3. Higher levels saw a mix of increases and decreases depending on city. Montreal saw the best price decreases with level 5 dipping 16.1 per cent and Level 3 dipping 24.1 per cent.

Canadians looking for the best rates on wireless service plans should turn to new entrants instead of incumbents, the data shows. Yet in 2016 there were no new entrants in the Winnipeg or Regina markets, and only one new entrant in other cities, as follows: Eastlink in Halifax, Videotron in Montreal, and Wind in Toronto and Vancouver. Here’s a comparison for these new entrant’s pricing against an average price of incumbents Telus, Rogers, and Bell: 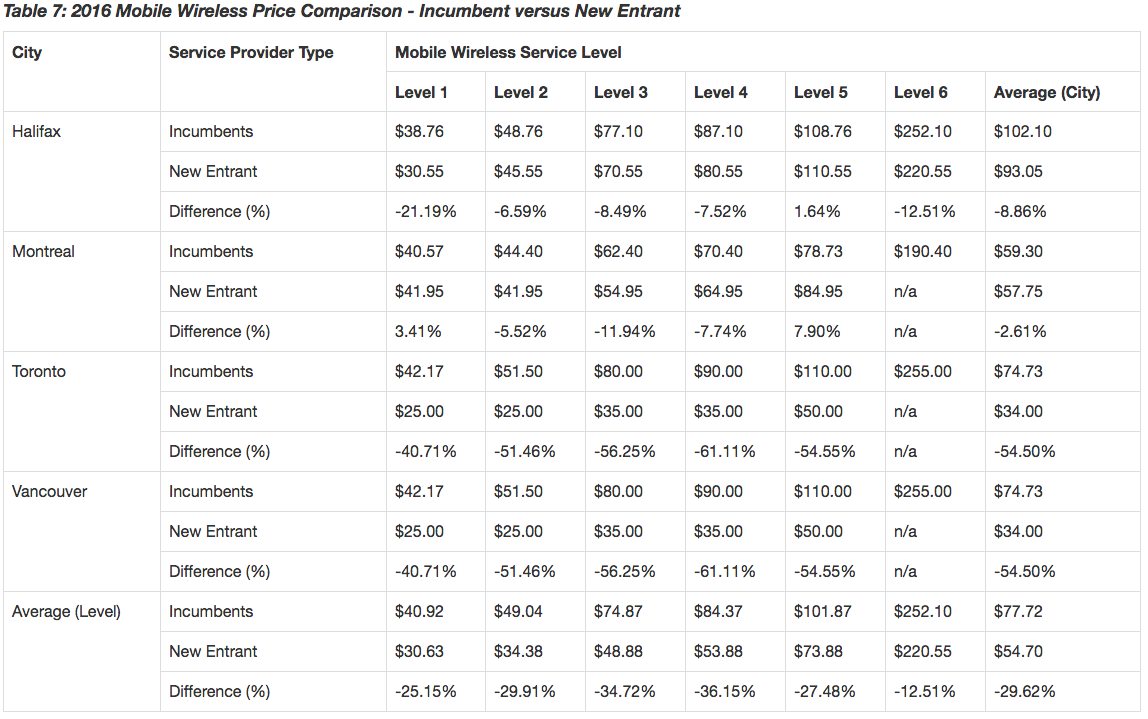 Because Nordicity collected its survey data from cities – Halifax, Montreal, Toronto, Winnipeg, Regina, and Vancouver – the data isn’t representative of the entire country on average. Foreign pricing information was collected from the country’s largest city.

Brian Jacksonhttp://www.itbusiness.ca
Editorial director of IT World Canada. Covering technology as it applies to business users. Multiple COPA award winner and now judge. Paddles a canoe as much as possible.
Previous article
With Skipmenu, you can press 1 to speak with a robot, or your touchscreen to reach an actual person
Next article
Calgary-based telecom provider scolded by regulator for failing to resolve complaints