A Montreal-based cash logistics vendor is actually cashing in on the credit crunch by relieving small merchants of cash-handling burdens.

The service is very popular in the U.S.

Garda World Security Corp.’s Cash Link service is one of several cash logistics services available in the market today. It competes against brands such as Brinks and ArcaTech, handling cash for restaurants, convenience stores, and other retail locations.

The idea is to free up management time to focus on core business competencies and improve security, says Christopher Stanley, vice president of product management for Cash Link at Garda.

He says store managers often spend as much as 45 minutes to an hour each day taking cash to the bank, often leaving no one to run the store. “This is being done between 6 and 8 a.m., the busiest time of day for a convenience store – their morning drive.” 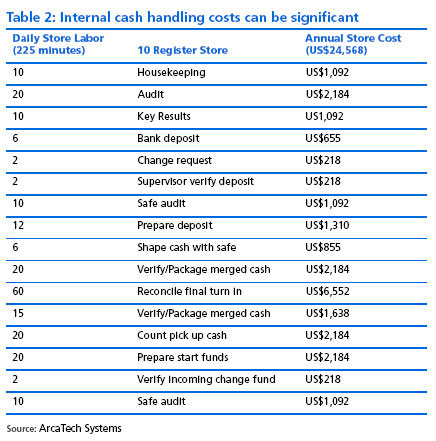 A vendor table shows that cash handling tasks can be expensive.

Cash handling can be a monotonous task requiring hours of employee time, from both cashiers and management. For years, the laborious process of emptying tills into brown envelopes and depositing those manually into a safe, only to have that safe reopened the next morning and counted by the manager again, has been accepted by small merchants as a necessary albeit cumbersome ritual.

But for the past 15 years, in the U.S., new technology has been helping reduce the tedium in that process. Smart safes are being offered up by cash logistics vendors.

Someone from the vendor firm would visit the merchant location several times a week to pick up the money and have it deposited. Instead of merchants counting the money manually and passing it around in sealed manilla envelopes, it is directly deposited into the smart safe that automatically tallies the cash entered and records who put it there.

“The Cash Link system recognizes the cashier by their PIN code and automatically scans the bills to identify the denomination,” Stanley says. “It also keeps track of the time, and the day.”

Overall, smart safes have been received well in the U.S. market. A total of 25,000 such safes have been installed at merchant locations in the U.S., according to a report from Boston-based financial consultants Celent Inc., a member of the Oliver Wyman Group. Many of those – about 15,000 – came after a change in U.S. banking policies in 2004 that allowed for provisional credit to be issued based on validated money residing in merchant locations.

Banks south of the border will work with cash logistics vendors to integrate their systems into a closed loop connection.

It allows for money deposited by merchants into their smart safes to be wired directly to the bank, and additional credit is awarded based on the money deposited on location.

“RCC does require integration of several systems to deliver the most compelling merchant value proposition,” says Bob Meara, author of the report and an analyst with Celent. “The good news is that this effort has already been done among four of the largest cash logistics providers and several dozen banks in the U.S.”

“You have to partner up with the bank in order to make this happen,” he says.

Provisional credit may not be offered in Canada because of different banking regulations. Overall, cash logistics services are less used by smaller merchants in Canada when compared to the U.S.

But in the face of a recession that was caused in part by a credit crisis, the ability to quickly handle cash flow may become more of a priority for many merchants.

“It is widely known that more consumers are defaulting on credit card accounts, and that trend is expected to continue. Those consumers are more likely to use cash,” Meara says. “Additionally, multiple financial advisors are counselling consumers to establish family budgets and use cash instead of credit, because credit cards have been linked to higher spending.” 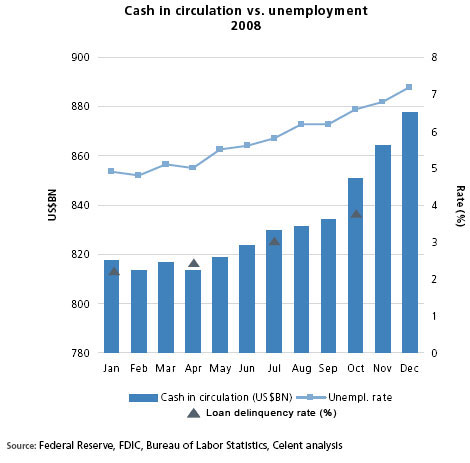 The amount of cash being used is higher during times of recession.

The story is spelled out by holiday spending statistics.

In a Zogby International survey conducted over last holiday season, 73 per cent of respondents said they use cash and savings to finance holiday purchases instead of credit. Only 18 per cent planned to use credit cards.

The cash trend is expected to increase through 2009 – a step away from a previous consumer trend that saw greater usage of credit cards for daily purchases.

Improved security is another benefit touted by smart safe vendors – guarding against both internal and external theft.

“Studies show there is a lot more internal theft than external theft,” Stanley says. “One reason why this happens is cashiers have a huge amount of money built up in their cash drawer.”

Many merchants using smart safes encourage cashiers to deposit money into the safe as quickly after the point of sale as possible. Once it’s in the safe, no one in the store can touch the money again – only Garda can open it. This also protects against thieves making off with the loot.

“The safes weigh 400 lbs and up, and are securely bolted into the floor,” Meara says. “Making off with a safe would be a huge undertaking.”

Garda has a commanding footprint in the cash logistics industry, Meara says. Though not for certain, many analysts position it at second place behind Brinks. It is known for its well-developed in-house software that easily reconciles merchant safe deposits with accounting software.

It is difficult to estimate the average cost of Garda’s Cash Link service because it is so often customized to fit the needs of the merchant, Stanley says.

Small businesses can look bigger with help from the cloud

Canada’s IT skills shortage likely to get worse, experts say