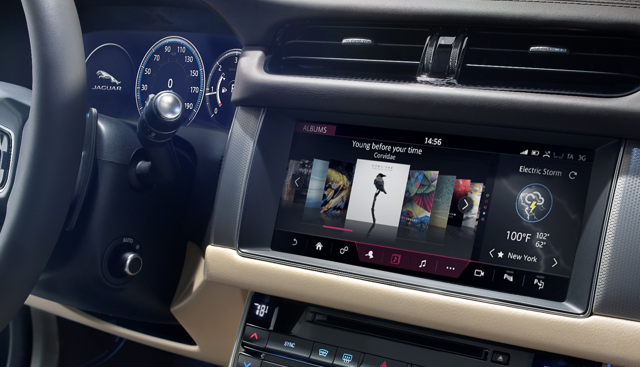 A Canadian app platform that specializes in delivering apps over the air will be doing so directly into car dashboards after Jaguar Land Rover announced that it is the cloud app provider for its line of vehicles.

AppCarousel is based in Calgary and was acquired by Toronto-based AppDirect in the summer. Its business is to deliver apps to “smart devices” that are different from your typical consumer smartphones or tablets. It provides a curated app store, skimming out apps that aren’t suitable for the type of device being used, can updated apps, helps to monetize apps, and offers developer programs.

According to Terry Hughes, the managing director at AppCarousel, it had been in talks with Jaguar Land Rover for about two years. With connectivity in the car becoming more commonplace – either via a Bluetooth connection with a smartphone or with a dedicated SIM chip – manufacturers are looking to woo drivers behind their steering wheel with new information and entertainment services.

“It’s a challenge all car manufacturers are struggling with,” he says. “How do you deliver apps in the most safe way and the most secure way?”

For Jaguar, the apps delivered will be CNN news, weather from AccuWeather, and flight information from FlightStats. That’s just the beginning for what the app experience could look like for Jaguar drivers, as differences in car models and location sold will vary, and more apps could be delivered in the future.

Jaguar “wanted a differentiated experience,” Hughes says. “This is the year all the car makers are making noise about their connected car experience.”

AppCarousel will deliver its apps to Jaguar’s proprietary operating system that it installs in all of its vehicles. Its approach to the connected car is not to treat the car dashboard as an extension of the smartphone, but to just deliver content independently. Other car makers are adopting operating systems from mobile OS makers like Apple CarPlay or Google Auto, which are geared towards working with a companion smartphone.

It’s the same difference for AppCarousel, Hughes says. It can deliver its app platform as a service over Google or Apple environments as well.

But the real reason that car makers would work with AppCarousel is because they want to have some control over the driver experience, Hughes says. Most recognize that asking a driver to sift through endless app options on Google Play isn’t going to work well in the car, and there’s just a few key things that would be really useful to drivers.

Giving drivers more reason to want a connected car – in the form of apps – also moves forward the inevitable inclusion of this technology in every vehicle. That could lead to useful data for car makers that they haven’t had access to previously – everything from driving habits to entertainment choices in the car to repair and maintenance records could be uploaded to car makers via the cloud.

So if you looked forward to that time at the end of the day when you could get away from the connected world and just listen to some music as you drove home, Hughes has some bad news for you.

“The car, the last bastion of seclusion and isolation, has finally been connected,” he says.

Brian Jacksonhttp://www.itbusiness.ca
Editorial director of IT World Canada. Covering technology as it applies to business users. Multiple COPA award winner and now judge. Paddles a canoe as much as possible.
Previous articleApple Pay launches in Canada without cooperation from Canadian banks
Next articleToronto agency connects brands with online personalities