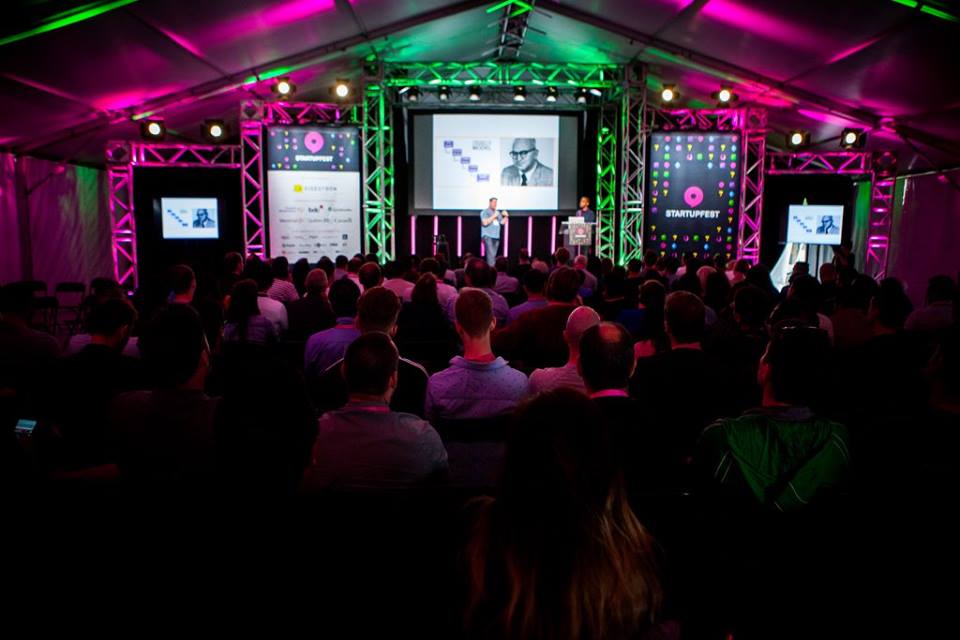 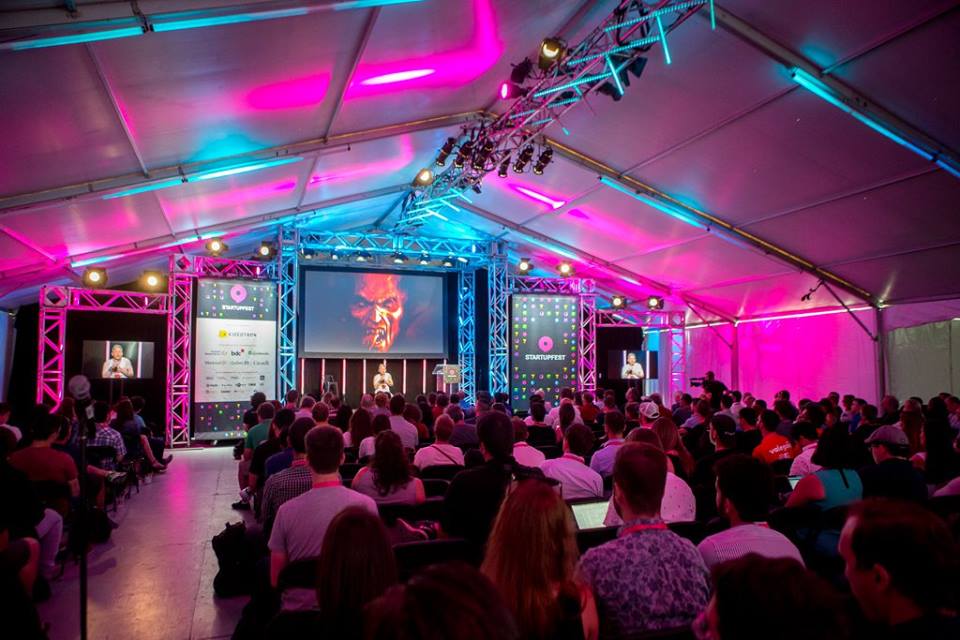 This year’s International Startup Festival in Montréal was the seventh edition of the annual event that bring entrepreneurs, investors and the rest of the startup ecosystem together for three days of keynotes, how-to sessions, dedicated subject-matter tents, food trucks and countless ways to pitch your way to fame and possibly fortune.

In keeping with the “Lucky 7” theme of the conference, here are my top seven picks from the Festival. (Image: Startup Festival/Dominick Gravel) 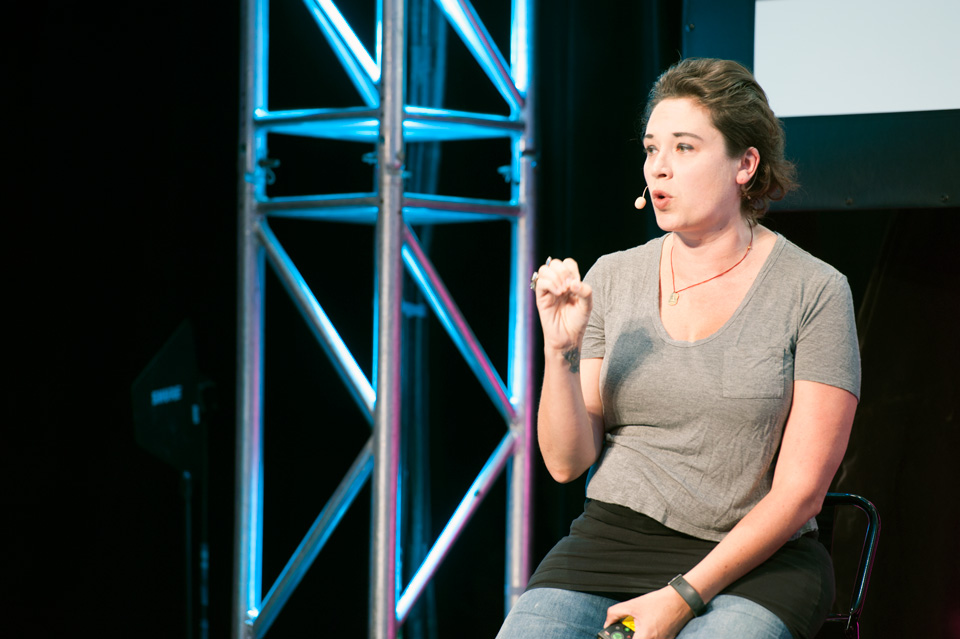 The most powerful session I caught was Pando founder and editor in chief Sarah Lacy who tore into what she called the “toxic bro-culture” that has made Silicon Valley profoundly hostile to women and people of colour and that is, in her words, wrecking tech. Lacy cited mountains of data that show that companies with at least one woman cofounder outperform all-male-led companies by 63% and generate 35% higher returns. And yet, she said, persistent and erroneous pattern recognition that sees venture capital investors favour white males means that “toxic masculinity > data.”

Fortunately, Lacy said, “In 2017, the toxic masculinity bubble has finally popped” and the wreckage is littering the whole valley. Citing examples such as the recent New York Times article about a “culture of harassment” in tech companies, the resignation of Uber founder and CEO Travis Kalanick, and the implosion of Binary Capital following accusations of the serial sexual harassment of women by its cofounder Justin Caldbeck, Lacy said, “We are absolutely changing this industry … in ways that have these men scared shitless.”

Lacy got a standing ovation, something I have not seen in any of the five Startup Festivals I have attended over the years. (Image: Francis Moran) 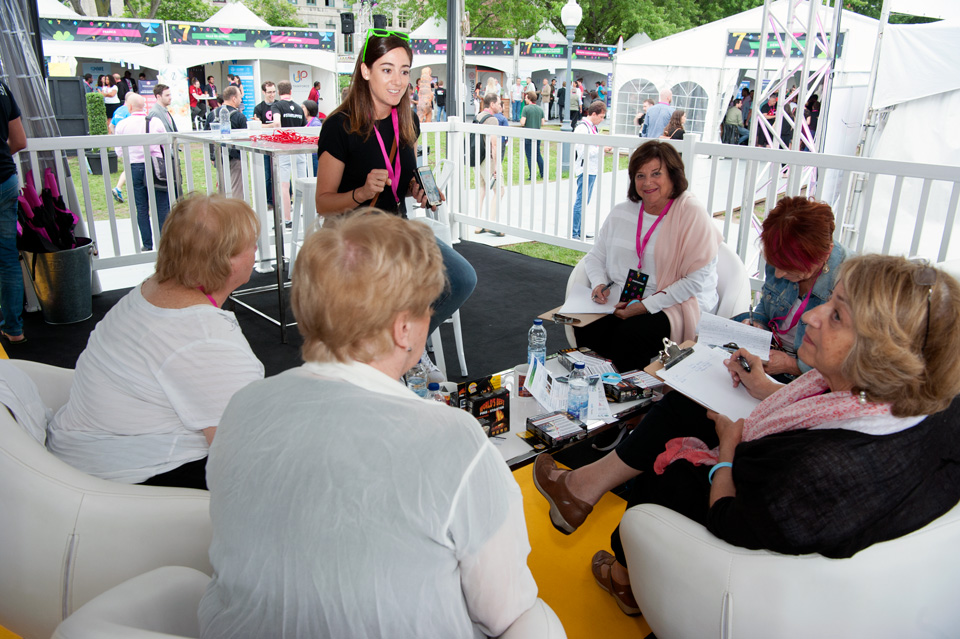 The Grandmothers’ tent is a perennial favourite at StartupFest and this year was no exception. All day long, there were long lineups of entrepreneurs eager to explain their startup in a way that their own grandmothers could understand.

The actual grannies who work this tent have enjoyed a legendary reputation as insightful technology seers ever since their chosen startup at the very first StartupFest went on to a spectacular exit shortly thereafter. 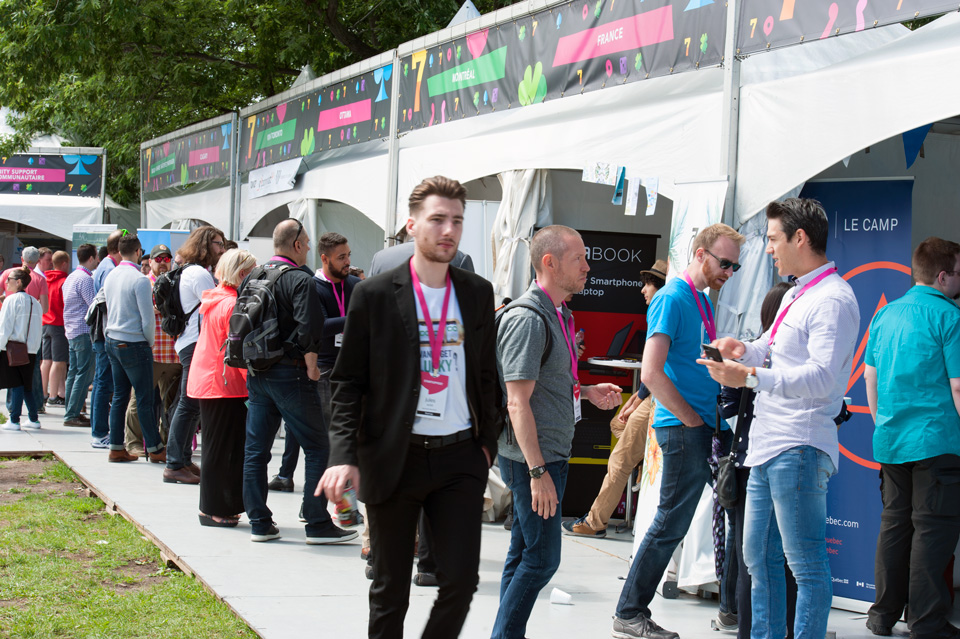 Besides the grandmothers’, there were 22 additional tents hosting delegations from other cities and countries, demoing products and applications, or devoted to specific subjects such as artificial intelligence or infrastructure. Rolled out as an experiment at the second festival, the tent village is now a popular and entrenched part of the event and it’s where most of the one-to-one interaction of the festival takes place. (Image: Francis Moran) 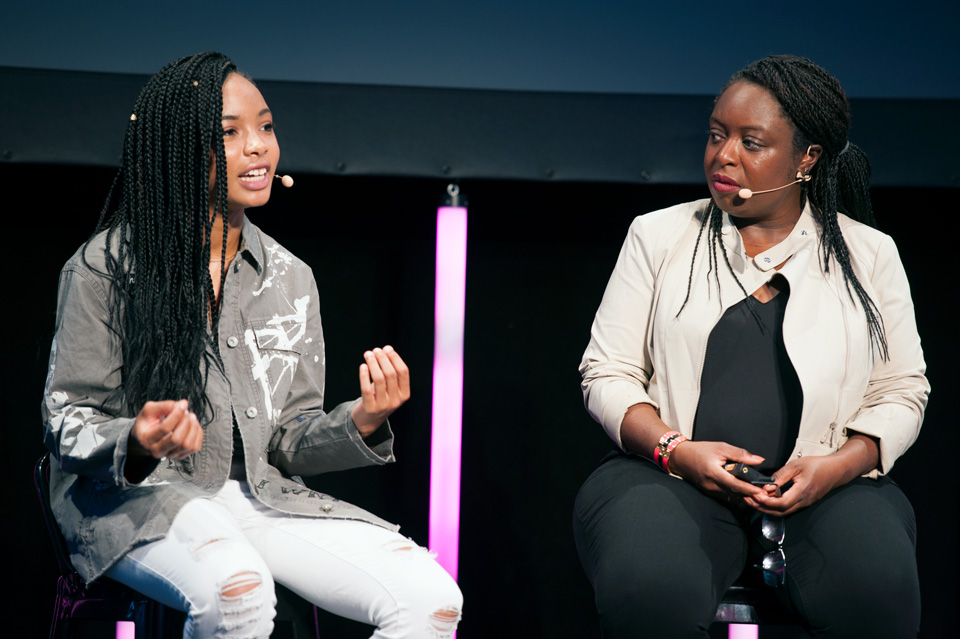 With a mission to increase the numbers of women of colour working in all technology fields, Black Girls Code is a U.S. not-for-profit that encourages African-American girls “to become innovators in STEM (science, technology, engineering and medicine) fields, leaders in their communities, and builders of their own futures through exposure to computer science and technology.”

Founder Kimberley Bryant, right, and her daughter, Kai Bryant, left, told entrepreneurs at StartupFest that they should “have a reckless disregard for the impossible.” More than half of middle-school girls are interested in computer science but fewer than two percent of them plan to major in it by the time they get to high school. 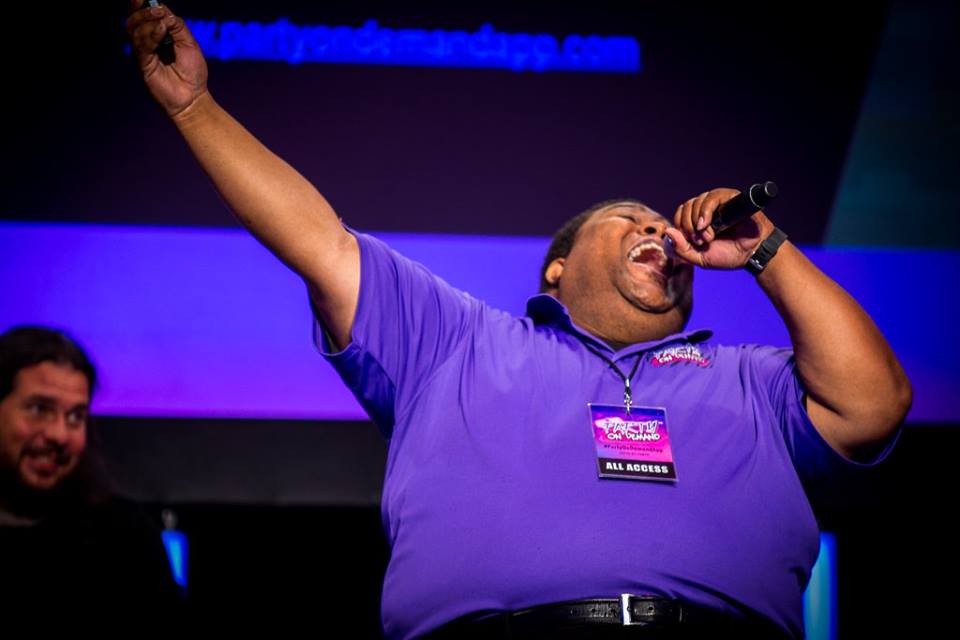 I was grabbing a quick bite away from the main stage before heading out of StartupFest to meet with a client when the unstoppable force known as Willie G. took the stage to pitch his startup, the instant-event hiring app Party On Demand. With the sound of Willie’s consummate showmanship reaching all the way out to where I was eating, this was easily the loudest and most enthusiastic pitch I have ever seen.

But the best was yet to come. One of the VC judges, perhaps hoping to expose Willie as all flash and no substance, peppered him with a range of questions about the company’s potential performance, cost, customer acquisition and other metrics. And Willie had them all down pat. It’s no wonder Party on Demand was judged the best onstage pitch of the festival. It was also the kids’ choice award winner. (Image: Startup Festival/Dominick Gravel) 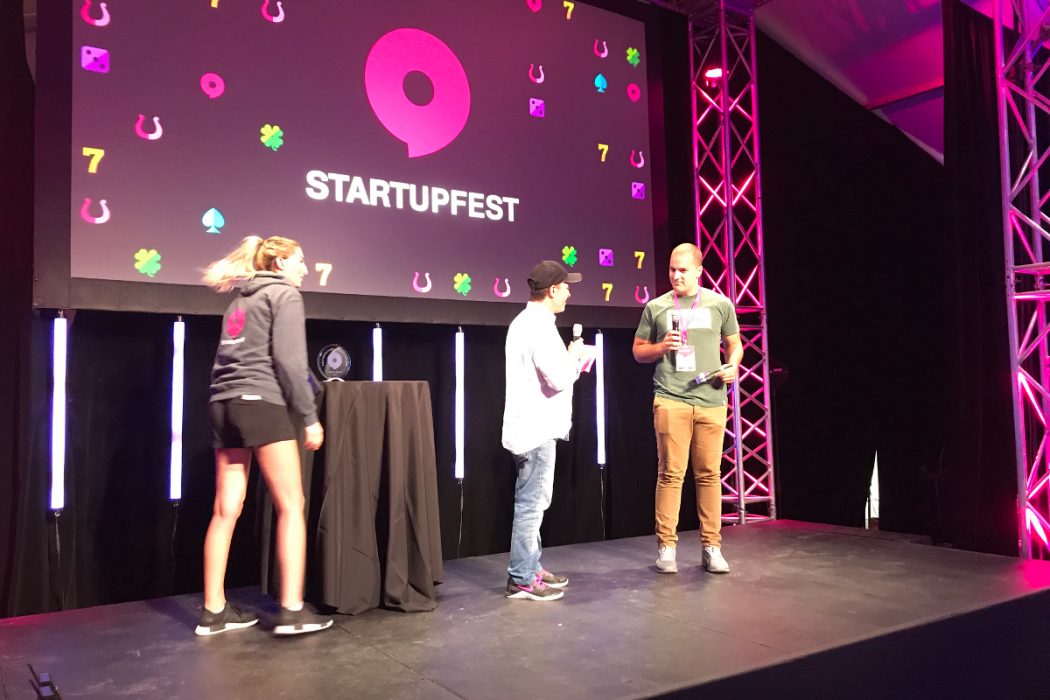 And the winner is: Flashfood Inc., a London, Ontario-based startup whose smartphone app allows grocery stores and restaurants to sell high-quality, surplus food at steep discounts to shoppers, won the festival’s top prize of a $100,000 investment by a group of angel investors. (Image: Startup Festival)

I don’t know if the Startup Festival would be as big a deal if it was held anywhere else but I do know that its home city of Montréal is a big factor in its success. Maybe it’s because of their inherent Gallic flair or maybe it’s because they hibernate during their brutal half-year winter, but les Montréalais seem to live on the streets the whole summer long, with a never-ending assortment of festivals and carnivals from comedy to jazz to LGBTQ and more. I can’t make a list of the Lucky 7 things about StartupFest without including this beautiful Canadian city that is an indelible part of it. (Image: Sifiso Mdluli)

Previous articleIt’s time for each of us to rethink ‘the plan’ and find our trust
Next articleThe Business Leadership Podcast: Justin Thouin, co-founder and CEO at LowestRates.ca