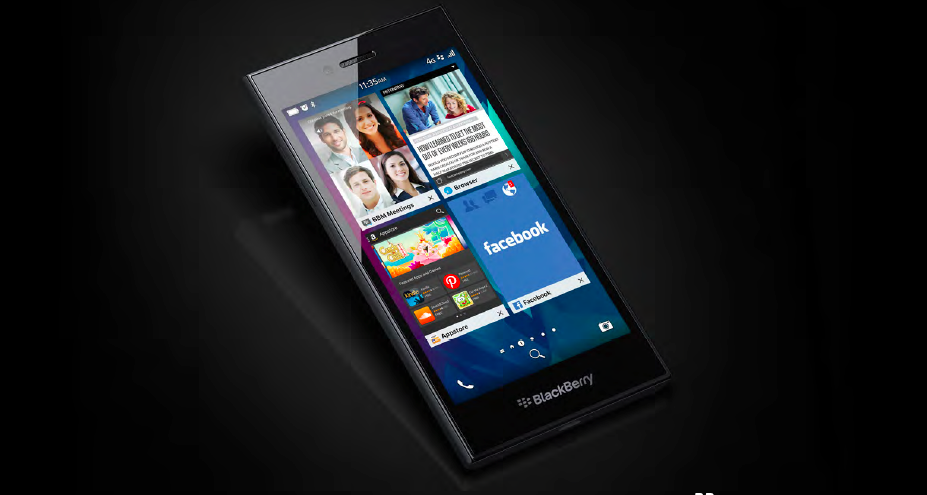 The BlackBerry Leap is another in the series of new BlackBerry models introduced over the past year. Each is, in its own way, radically different than the others in some aspect of design, appealing to a new segment of the business audience that BlackBerry is seeking to reclaim.

The Passport appealed to those who wanted something new and different without parting with the familiar keyboard. It’s a group I’d refer to as the “radical conservatives.” The aptly named Classic appealed to longstanding and loyal BlackBerry customers. Both groups are, if not older, unquestionably more established business customers.

The Leap is once again appropriately named. It’s a big departure in terms of design and features — all aimed squarely at a new segment – a younger demographic, small businesses and start-ups.

Not surprisingly, to win a generation that grew up on Apple and Android, BlackBerry has had to adopt some of the features of its popular consumer-focused competitors.

The Leap incorporates a number of features that a younger audience is accustomed to. It has a modern, sleek design, a large 5-inch screen and the biggest surprise of all for me – a touch screen “virtual keyboard” instead of BlackBerry’s trademark physical keyboard. 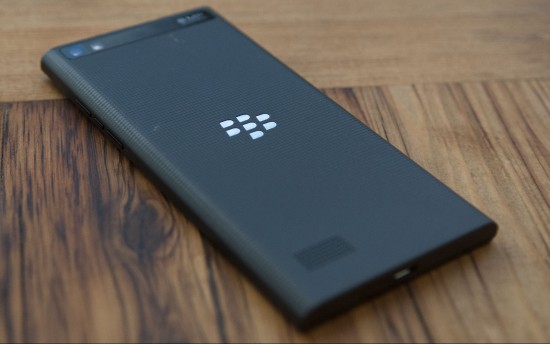 The price is extremely attractive – especially for younger buyers and small businesses. It will launch with a price tag of zero dollars ($0) on a plan with most carriers. If you want an unlocked version the price is a low $350.

Despite the cost, the Leap has a lot packed into its small form factor. Speed is one of the things you first notice. Battery life is exceptional. My first charge lasted a day and a half. I spent a lot of that day streaming media to the phone.

While it uses a “virtual keyboard,” BlackBerry has focused quite successfully on speeding up data entry and increasing the accuracy of input. And of course, it offers all of this with BlackBerry’s deserved reputation for great security.

And we should be clear that while the design of the Leap is similar to its consumer-oriented rivals, the Leap, like the Passport and Classic, is aimed clearly at business users.

Some of this is contributed not by the Leap itself, but by the BlackBerry 10.3 operating system that it runs on. The newest version of BlackBerry OS is focused on delivering efficiency and security to a business audience.

For example, the integration of all messaging into the BlackBerry Hub is the best native toolset for managing the modern tsunami of messages. It takes everything – multiple emails, text, voice and even social media messaging and puts it in one location with exception tools to manage it. It also integrates the highly secure BBM and even new “BBM meetings” feature to enhance collaboration.

In the management of documents – primarily Microsoft Office, BlackBerry’s approach is also aimed at the business warrior. Docs To Go allows BlackBerry users a sophisticated and powerful way to be productive in a mobile environment. While it has some rivals, there is simply nothing better that I’ve encountered. 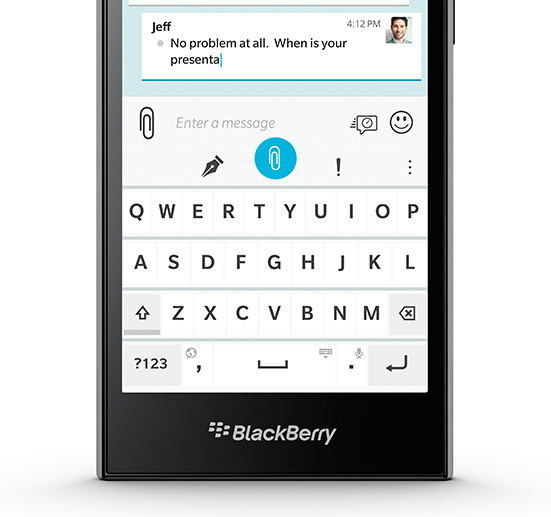 You can create, edit and even share Microsoft Office documents remotely. With a nod to both security and remote working, you can easily store a huge amount of documents. File management allows you to organize documents easily.

For those who want to work “offline” a simple micro SD card can extend the memory of the device by as much as 128 GB for a surprisingly low cost. The BlackBerry Blend software can transfer documents directly. You can work securely and locally in a coffee shop, an airport or even mid-flight.  With the extended battery life on all the new BlackBerry devices, you can do this for even a long flight or when the charging stations are all taken.

BlackBerry 10 supplies you with all of the most popular business apps like Evernote and Dropbox. The ability to load Android Apps from the Amazon Web store allows a good selection of business and consumer apps. To be clear, this is nowhere near the selection of a pure Android phone or an iOS device, but it’s certainly “good enough.”

All of these features are available in all of the various new BlackBerry incarnations – Passport and Classic. Now the new Leap makes them available at this much lower price point and with the new design.

Making the Leap to startups and a younger business audience

Preserving the very best business features of the BlackBerry line while still reaching a younger, albeit business-focused audience – creates some interesting combinations.

The device is thin, sleek and elegant, yet it also feels more rugged than an iPhone. Its slightly heavier – not enough to be bothersome, but enough to make a statement. Where the iPhone has that slick aluminum back, the Leap has a stark black, rough texture. It still looks great, but it won’t slide off the side of the couch the way my old iPhone always did.

Likewise, the camera at 8 megapixels is certainly respectable. You may not see your pictures on a billboard like the iPhone is doing, but you get great shots whether it’s a whiteboard discussion or a birthday party for your kids.

The big surprise for me, when I saw the Leap, was what was missing. The missing physical keyboard gave me a shock.

While the onscreen virtual keyboard is a feature of every other phone, this one is distinctly different from the other touch screen keyboards. I’ve never been able to type accurately on a iPhone, no matter how hard I try. Android’s “point and drag” approach is marginally faster and more accurate – but I’ve never really mastered it. Nothing beats the QWERTY keyboard, which for me is why I use my BlackBerry devices far more than Apple or Android phones that I also own.

So I approached the Leap with trepidation. I was prepared to dislike it on principle, given my failure with virtual keyboards. The keys were bigger and separated by what look like the frets on a guitar. It was surprisingly easy to get a decent typing speed on it – even with my large “guitar player” hands. I could even do some “one handed” typing – something I simply cannot do on my Passport.

The Leap added another feature which really makes a difference in terms of accurate input. What I’ve termed the “suggestion engine” presents you with a choice of full words you can enter with a simple finger flick. While other phones have similar approaches, the way the Leap learns the vocabulary of the user and the context of a message is eerie. I’ve only had it a short while, but it quickly offered the words and phrases that I would normally use. As a result, you can accurately “flick” whole sentences word for word. The accuracy is exceptional.

How fast is it in comparison to other devices? I think it’s a lot faster but I haven’t had the time to do an objective test. Over the next few weeks I’m going to stage a comparison of the various keyboards for both speed and accuracy. I’ll report back to you then. All I can say is that with all of this, the Leap almost won me over. Almost.

But the Leap wasn’t made for me – it was made to appeal to a younger audience – one more accustomed to touch screens than I am. For that demographic, the Leap’s keyboard is as good as anything out there.

You can see what this looks like in my sneak preview video.

BlackBerry has never lost its leadership or cache in the area of security. At the device level, BlackBerry is an acknowledged leader. At the enterprise level, BES is re-emerging as a leader in what is coming to be known as Enterprise Mobility Management. This year, Samsung partnered with BlackBerry to integrate with BES. Clearly security and device management are still an area of leadership for BlackBerry.

At the device level, Leap users benefit from advanced security features, even if they are too small to invest in BES or EMM.

Secure BBM allows you to send and receive secure messages as well as some advanced features such as the ability to retract messages sent to the wrong person.

BlackBerry 10.3 allows you to track, lock, send a message to and even remotely wipe your device if it’s lost. I tested it up in cottage country and got a very accurate location for the Leap, as well as a bonus satellite image of my house in the Haliburton area.

For a small business or startup, particularly one that might have to convince a larger partner that they are indeed secure, the Leap offers a lot for very little investment.

This is another place where BlackBerry may be quietly taking a lead – voice recognition. I drive a Toyota with a hands-free dialing feature, but I’m still dreaming of a day when voice activation is actually safer than dialing. Right now I find the number of errors is so frustrating that I rarely use the system. I was surprised when my BlackBerry had much more accurate voice recognition than my built-in system.

So I wasn’t surprised to find that the Leap had excellent voice recognition. I first tried it in a crowded coffee bar in downtown Toronto. The voice recognition was excellent. It was able to interpret names that my other system would never get. It’s still a little clumsy, and it’s not something I would use a lot but I would hope that BlackBerry will continue to improve this over time. For now, I’m still playing with it to see what it really can do

Unlike the Classic which may one day steal me from the Passport, there’s no danger that I’ll adopt the Leap. But at my age, I’m not the audience for this phone. The real question is, “will it win over the younger business user or the startup business owner?” To my generation, this would be called the $64,0000 question.

But the bottom line on the Leap may indeed be the bottom line. At zero dollars on a plan and $350 for an unlocked version it’s an option that you must consider in a startup or small company.

Even in a larger firm like ours, where mobility costs are consuming more and more of our technology spend, the Leap is an attractive option. As an employer, I’d be confident enough that these devices would provide everything necessary to make our employees mobile and effective. But we all know that mobility is not solely about logic.