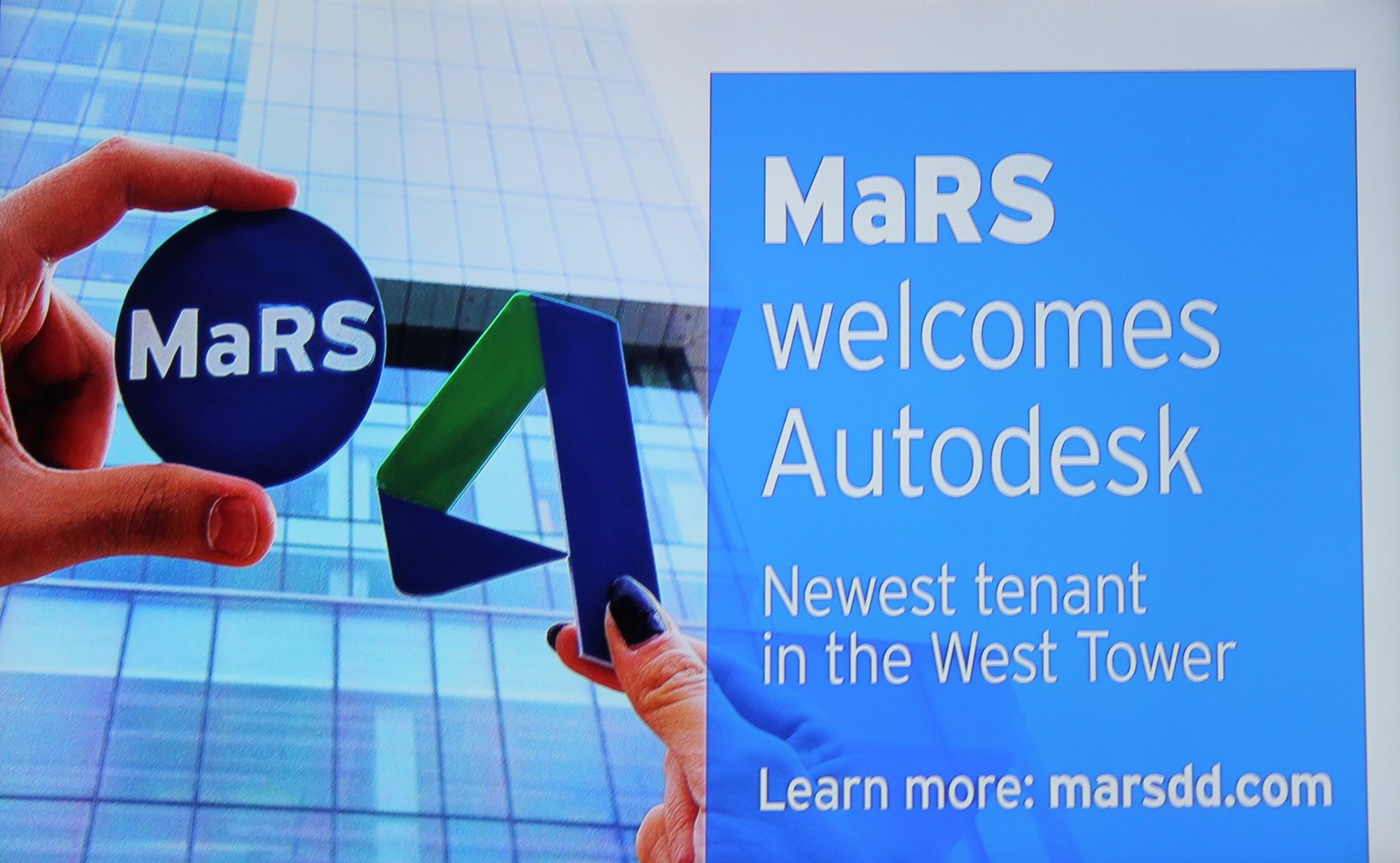 The pressure to find tenants to fill the void of the new MaRS real estate has been greatly alleviated after Autodesk’s announcement that it’s moving in.

“With today’s announcement (November 18, 2015) the (MaRS) West Tower is now 84 per cent leased,” said Brad Duguid, Ontario Minister of Economic Development and Infrastructure. “We’re on track for full lease up by early 2016. Thank you Gord.”

Duguid addressed his thanks to Gord Kurtenbach, Autodesk senior director of research, who played a key role in the company’s decision to move its Toronto offices from King and Sherbourne to MaRS.

Autodesk announced that it is taking 60,000 square feet of space. It will house the Canadian R&D centre, one of Autodesk’s biggest, and software developers for several products on the second and third floors of the building.

On the ground floor Autodesk will transform the glass-walled “jewel box” into an innovation space and design sandbox. Creators, customers and the public will explore new fabrication techniques using 3D printers and robotics.

Eighteen months ago critics pilloried Duguid and his provincial Liberal colleagues over MaRS Phase 2. At the time, only 30 per cent the of the 780,000 square foot building was leased. Some claimed the building was too big, too expensive, too weird to ever be filled.

Autodesk decision to move in is one of several announced in the past 60 days. Another was the September announcement of Johnson and Johnson that it would open its first JLABS incubator outside the U.S., at MaRS. The five existing JLABS already support over 100 early-stage companies with lab space, programs and access to investment.

At the Autodesk announcement Duguid spoke last and struggled to contain his emotions. “Today we are, we’ve crossed the threshold, the Rubicon, whatever you want to call it. Today is the day we declare victory. Today is the day we can say, beyond any shadow of a doubt, that for all of you here in this room that believed in the MaRS Tower 2 dream… folks… we did it.”

Duguid concluded by saying, “Autodesk, we’ve waited a long time for this announcement. We’ve known it was in discussion for a long time… Thank you for your confidence in Ontario, in Toronto, in MaRS.”

Geoff Fouldshttps://geoffreyfoulds.wordpress.com/
What fascinates me are the edges. And nowhere are the edges edgier… the stakes higher… than startups. There are plenty of sources of friction, compression and tension among founders and financiers, engineers and marketeers. How do you mesh all the edges so they transmit power even when loads are heavy? That’s what I write about.