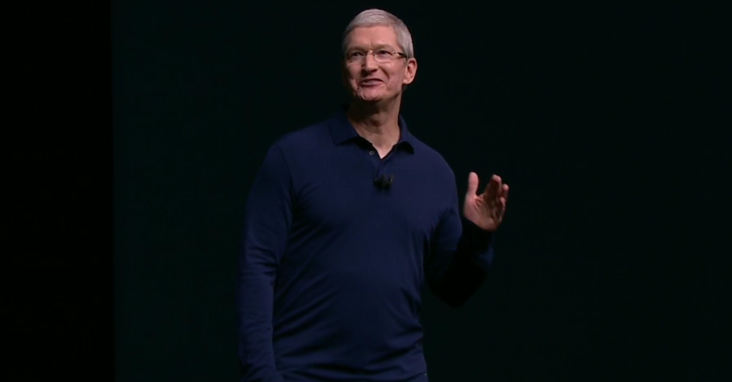 And yes, CEO Tim Cook (above) officially revealed the new iPhone – but it wasn’t the only highlight of the two-hour presentation, which featured a mix of the company’s business partners and Apple executives in addition to Cook. Read on.

The presentation started on a light note, with Corden appearing to pick up Cook and drive him to the San Francisco auditorium where the keynote took place, questioning his choice of suit along the way.

They were soon joined by a much more stylishly dressed Pharrell Williams (of “Happy” fame), who produced a set of novelty sunglasses for the three riders to wear while they sang Lynyrd Skynyrd’s “Sweet Home Alabama” (where Cook is from).

As endless runners go though, Super Mario Run sure looks fun to play, with gamers one-handedly making Mario jump through a variety of classic platforming levels until they reach the flag at the end of every stage.

Apple’s vice president of product marketing, Susan Prescott, came onstage next to demonstrate the new collaboration features being added to the company’s signature office suite, iWork. In front of the audience’s eyes, Prescott’s team transformed a drab slide from the keynote itself, a stock photo illustrating the company’s commitment to supporting U.S. charity ConnectEd, into a dynamic highlight complete with eye-catching graphs, statistics, and animation.

Advance buzz for the iPhone 7 might have stolen the Apple Watch’s pre-keynote thunder, but that didn’t prevent the company from making not one, not two, not three, but four announcements related to its 18-month-old device.

Boasting a dual-core processor and waterproof chassis that can withstand depths of up to 50 feet, the Apple Watch Series 2 is clearly being aimed at the fitness market in a way the original device was not. Even its most mainstream function was touted for its health benefits…

“I hope many of you have had a chance to try Pokémon Go for iPhone,” Niantic CEO John Hanke (not pictured) joked about his company’s runaway hit as he took the stage. “If you did, you’re not alone.”

In a bid to improve the game’s surprisingly well-documented health benefits, Pokémon Go for Apple Watch will largely replace the cellphone game’s map-based interface with automated alerts that tell you when Pokémon, PokéStops, or PokéGyms are nearby, and when your eggs have hatched.

While Cook emphasized the Apple Watch was now the world’s second-most popular brand of watch (behind Rolex), in a perhaps implicit acknowledgment that the device’s most devoted audiences might be athletes and the luxury market, the company unveiled two new lines of premium Watches developed in collaboration with other well-known companies, including the Apple Watch Hermès, which is about as elegant and pricey as you’d expect from the French luxury brand.

The Apple Watch Nike Plus, meanwhile, is designed with dedicated runners in mind, Nike brand president Trevor Edwards explained to the audience, asking users if they would like to go for a run when it’s been four days since their last run, or if their friend has run two more kilometres, or every Sunday.

Prices can already be found at Apple Canada’s website, with preorders starting on Sept. 9, the Series 2 and Hermès scheduled for release on September 16, and the Nike Plus available in late October.

Apple had already revealed a great deal about its newest mobile operating system before the event, including expanded support for the Internet of Things (IoT), Messenger animations, and expanded Apple Pay support, all of which were highlighted during the keynote.

“Now of course the world’s most advanced operating system deserves the most advanced smartphone,” Cook said, before revealing the device everyone had been waiting to see.

The audience, which had applauded every announcement, never cheered as loudly as they did when he said the words “iPhone 7.”

“As you know, we’ve always had a deep love for music,” Cook said at the beginning of the presentation, referencing both the success of Apple Music and the upcoming Apple Music Festival taking place in London.

At the end, Australian singer-songwriter Sia (that’s her in the colourful dress and pink bow) took the stage to perform her hits “The Greatest” and “Chandelier,” accompanied by her stage counterpart, Maddie Ziegler (second from left).