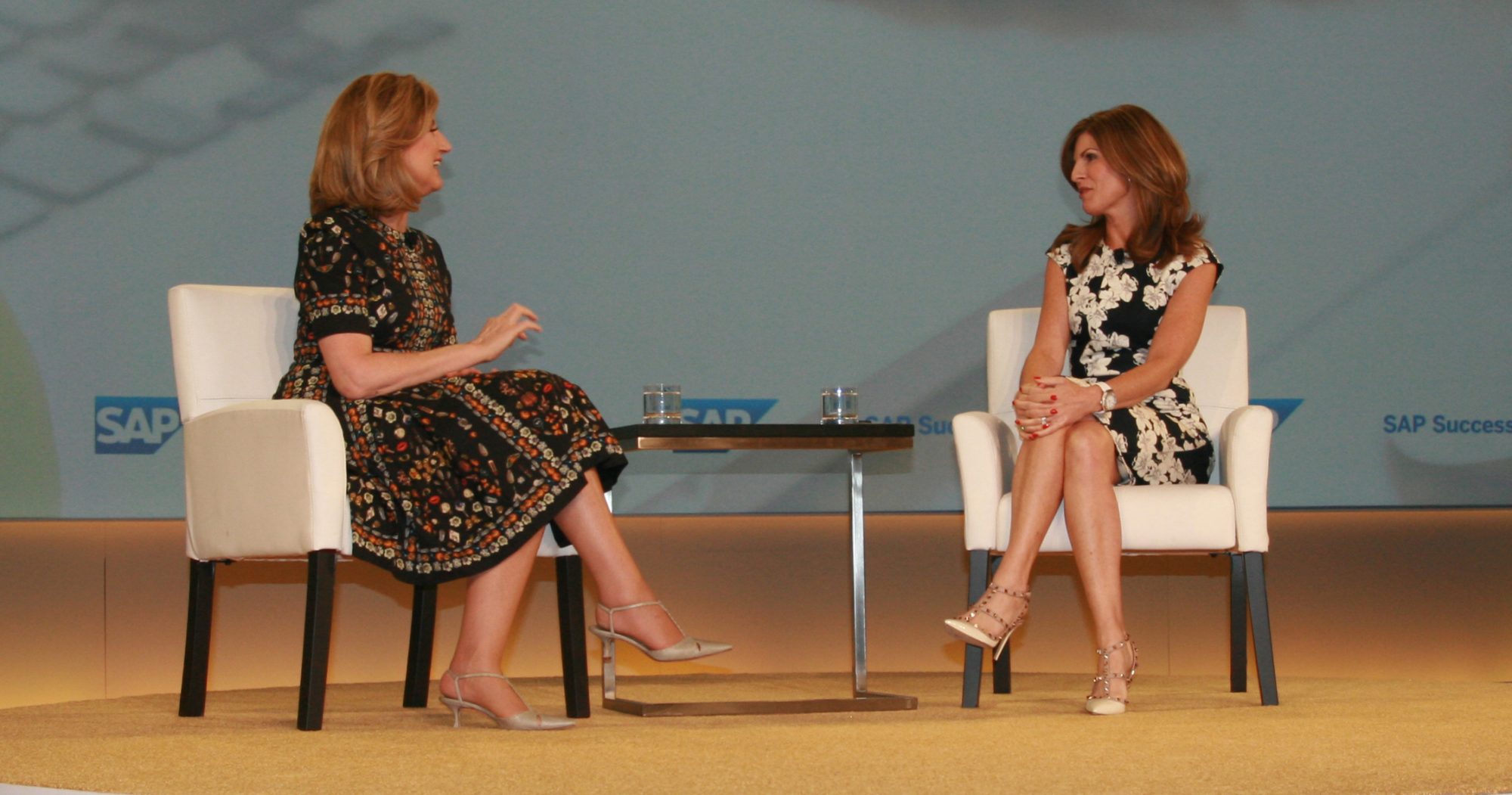 LAS VEGAS – SAP SuccessConnect 2016 has come and gone, but the new features announced for the German enterprise software maker’s signature cloud-based human capital management (HCM) platform, SuccessFactors, will live on, alongside the memories attendees will no doubt carry after watching memorable speeches from the likes of Magic Johnson, SAP CEO Bill McDermott, and Arianna Huffington (above, left), who dropped by to chat with SAP North America president Jennifer Morgan (right) about the importance of maintaining a healthy professional lifestyle, the value of workplace diversity, and why companies should reward perspective over stamina. Read on for more highlights. 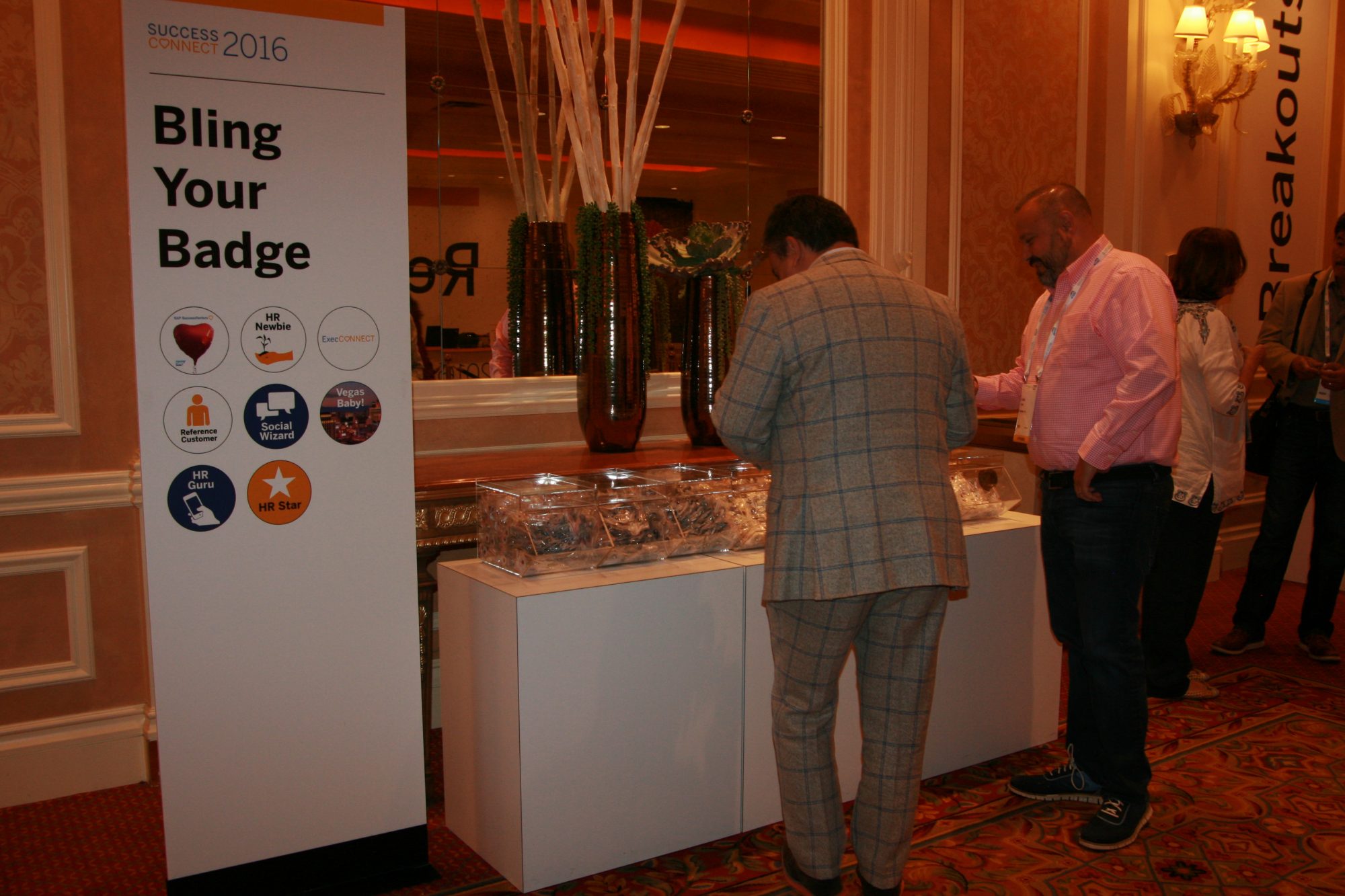 SuiteWorld had flair, SAP SuccessConnect invited attendees to “bling your badge.” Among the bling on hand: A button that deemed its wearer an “HR Guru,” another that declared them a “Social Wizard,” and, of course, one that simply read, “Vegas Baby!” 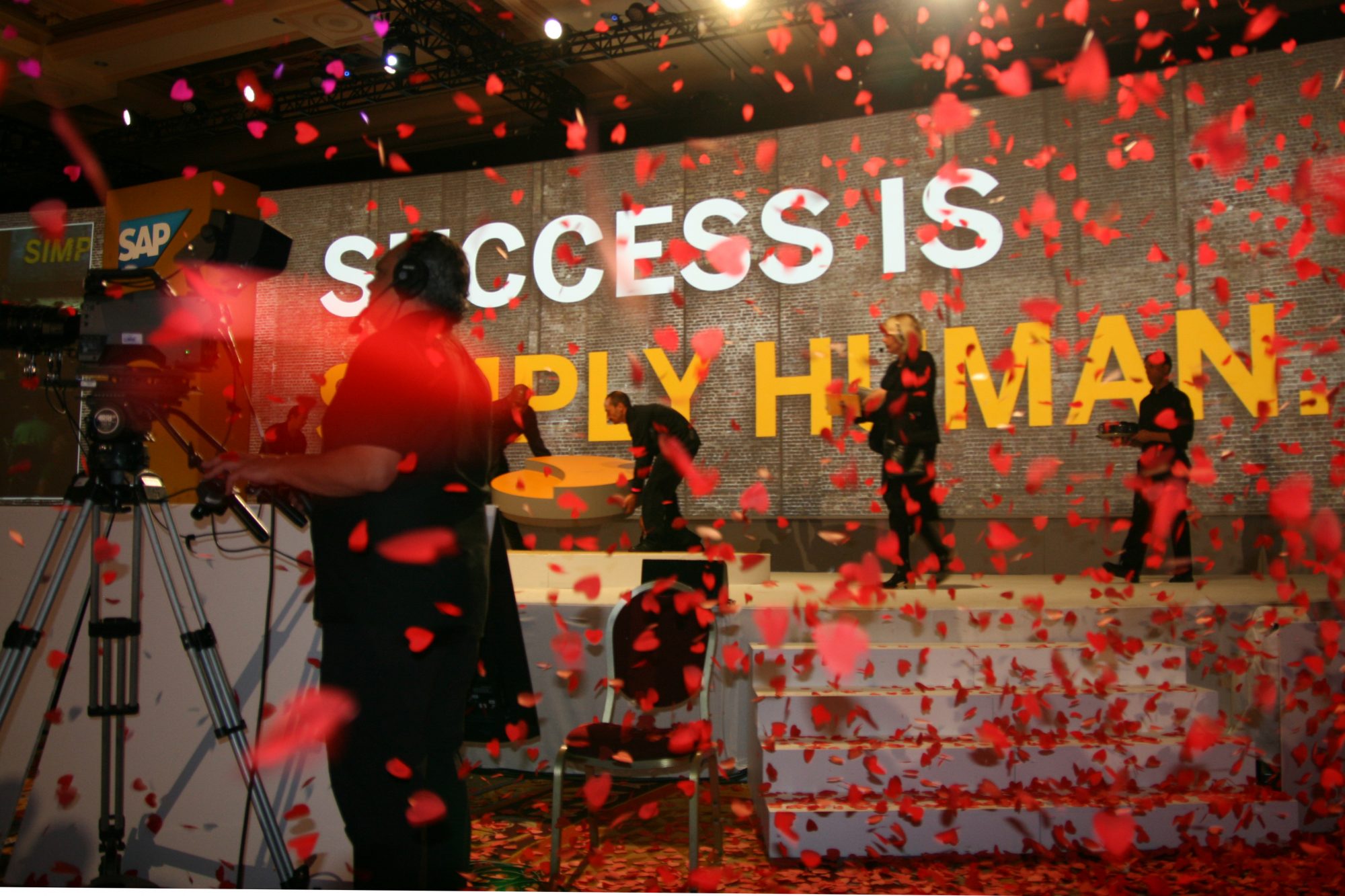 The conference’s first event started with a bang, literally: A couple of dancers appeared to move a virtual heart-shaped balloon across the stage, until it floated offscreen, reappeared in front of the audience, and exploded, covering front-row attendees (and less-than-amused reporters) with heart-shaped tissue paper. 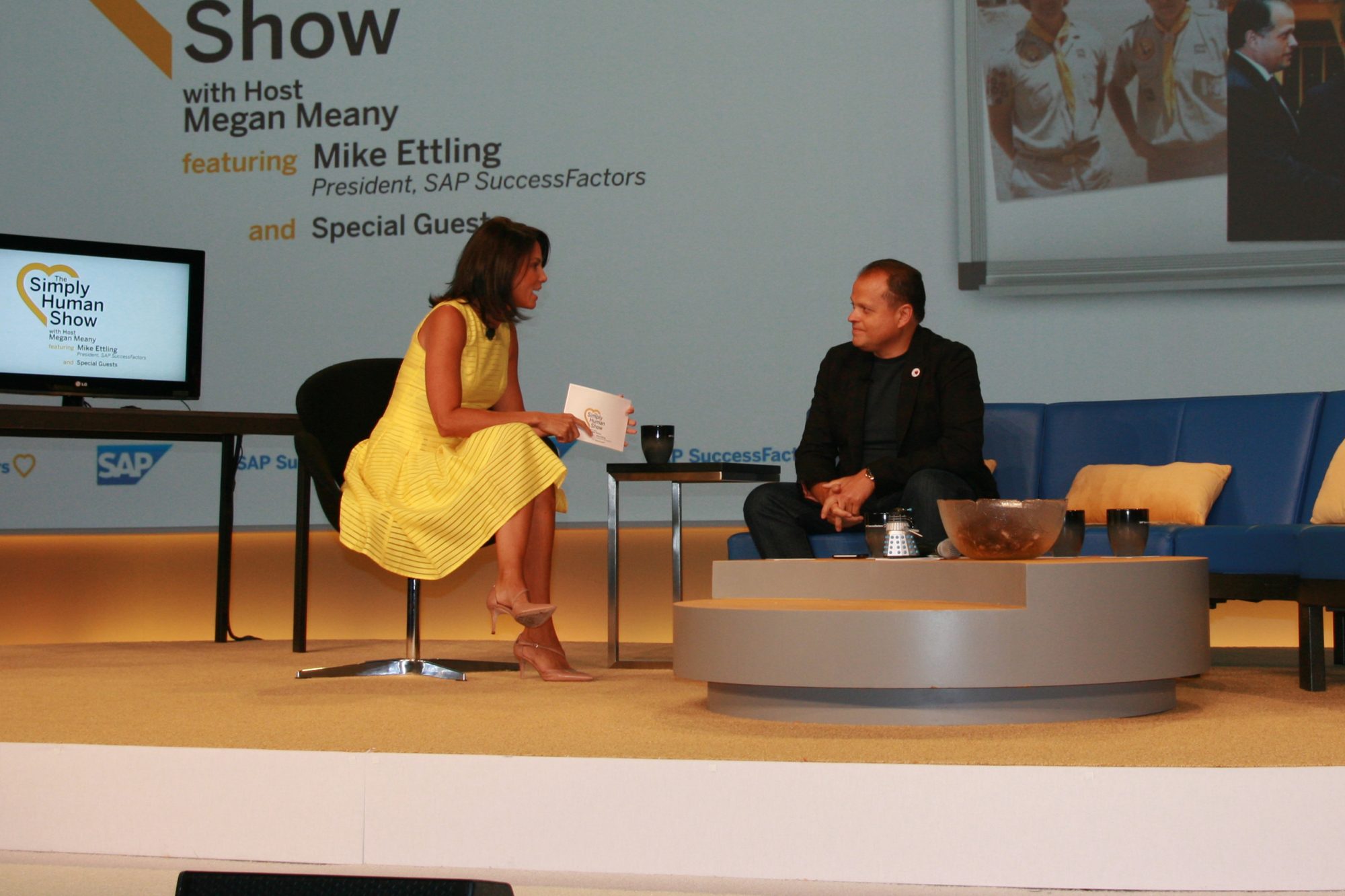 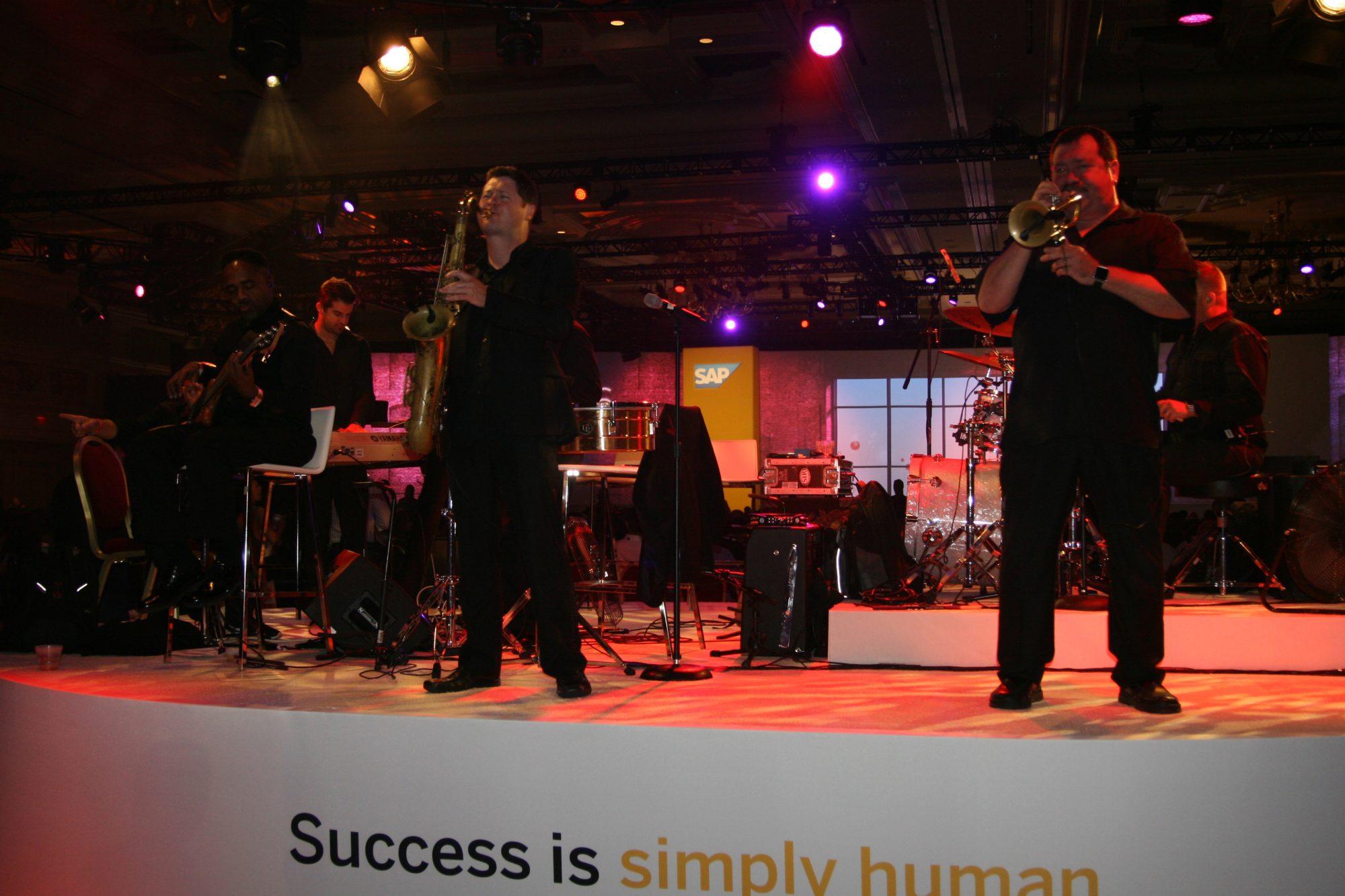 Have you heard a big band play Rihanna and Calvin Harris’ “We Found Love (In a Hopeless Place)”? If you attended this year’s SAP SuccessConnect, you did. 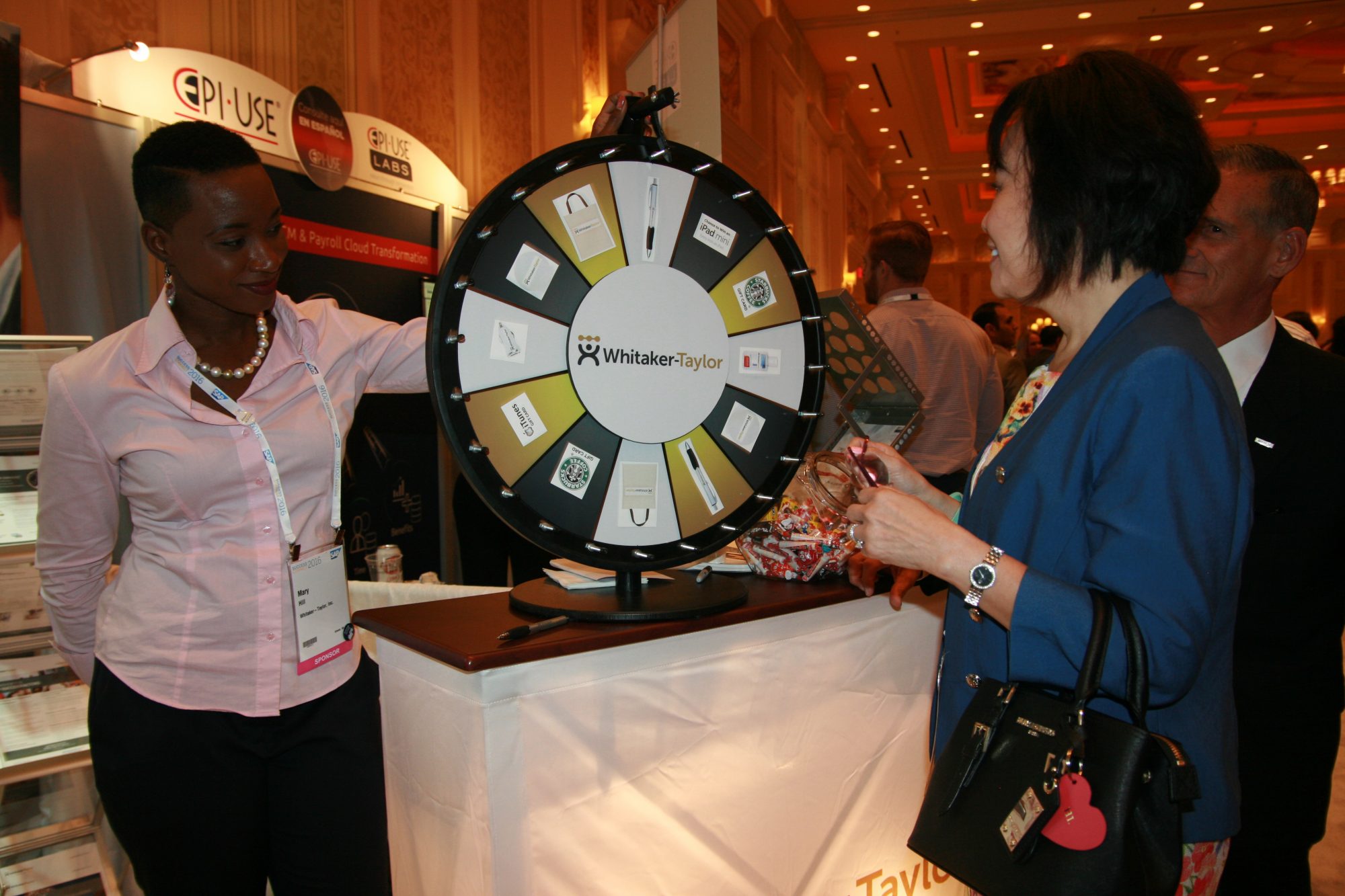 There’s nothing like the Whitaker-Taylor Wheel of Good Fortune – spun here by attendee Ha Le, commanding the rapt attention of Whitaker-Taylor’s Mary Hill (left) and Mark Unangst (right) – to improve one’s convention-going mood. Especially if one wins a Starbucks gift card, as we did a moment later. 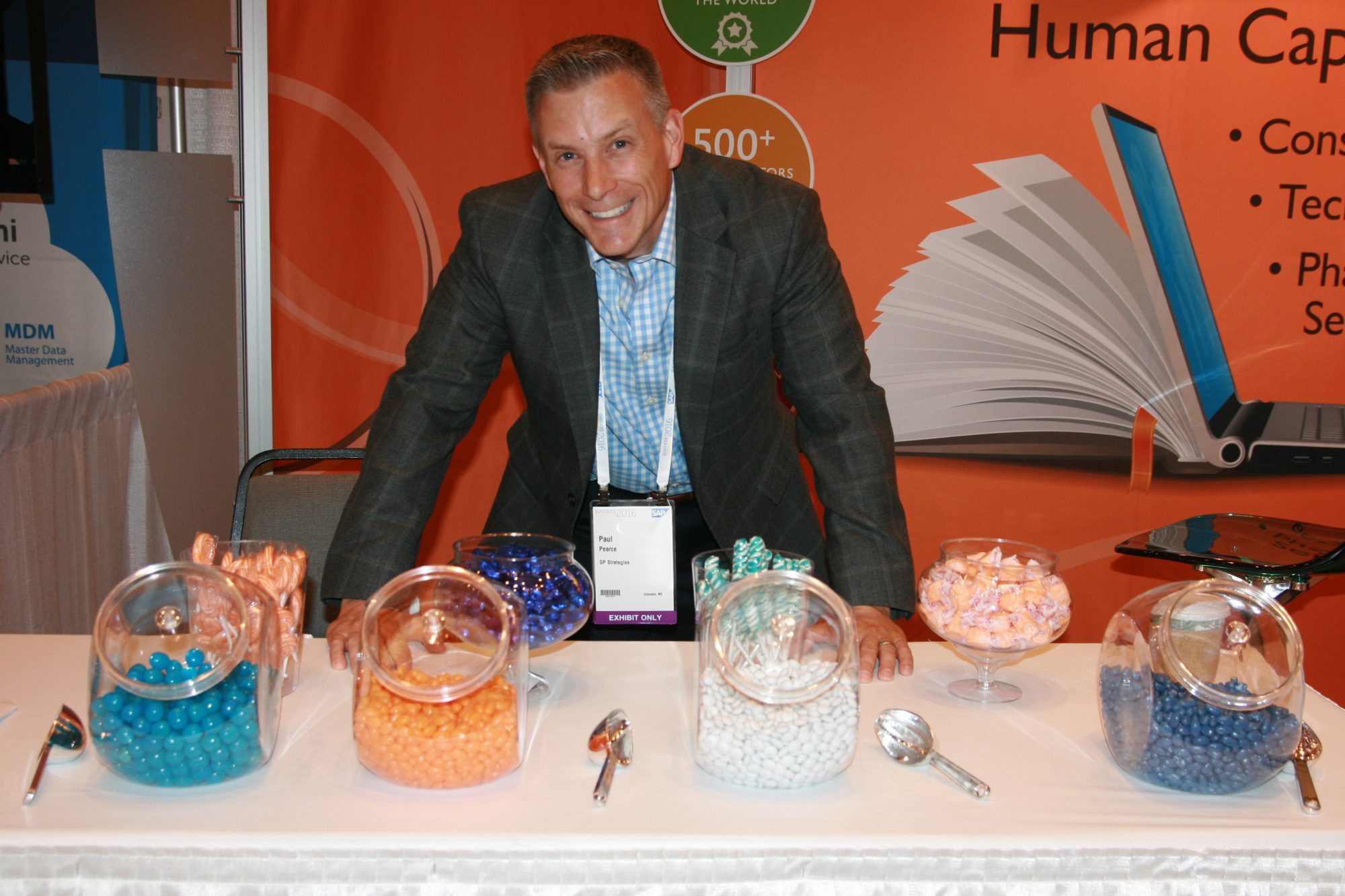 Attendees with a sweet tooth were invited to visit the GP Strategies booth, where the company’s managing director of business development, Paul Pearce, was all too happy to provide them with all of the saltwater taffy, gumballs, jellybeans, white M&Ms, and blue raspberry twist lollipops they could eat. 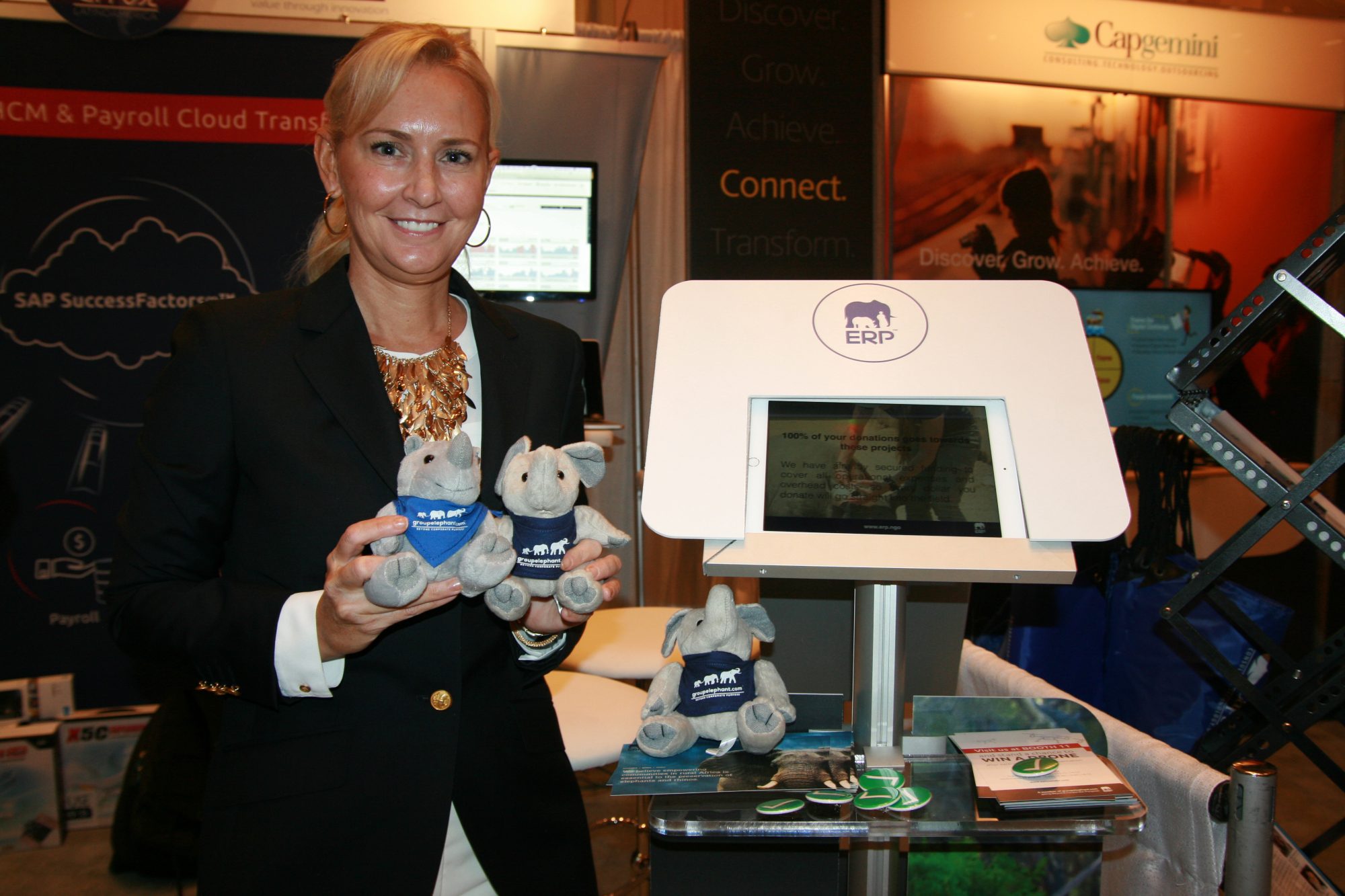 Shout out to Danielle Larocca and her employer, Epi-Use Labs, which is donating one per cent of its profits to ERP (Elephants, Rhinos, People), an ERP (enterprise resource planning)-driven initiative that aims to save elephants and rhinos by alleviating poverty among the rural poor in Africa. 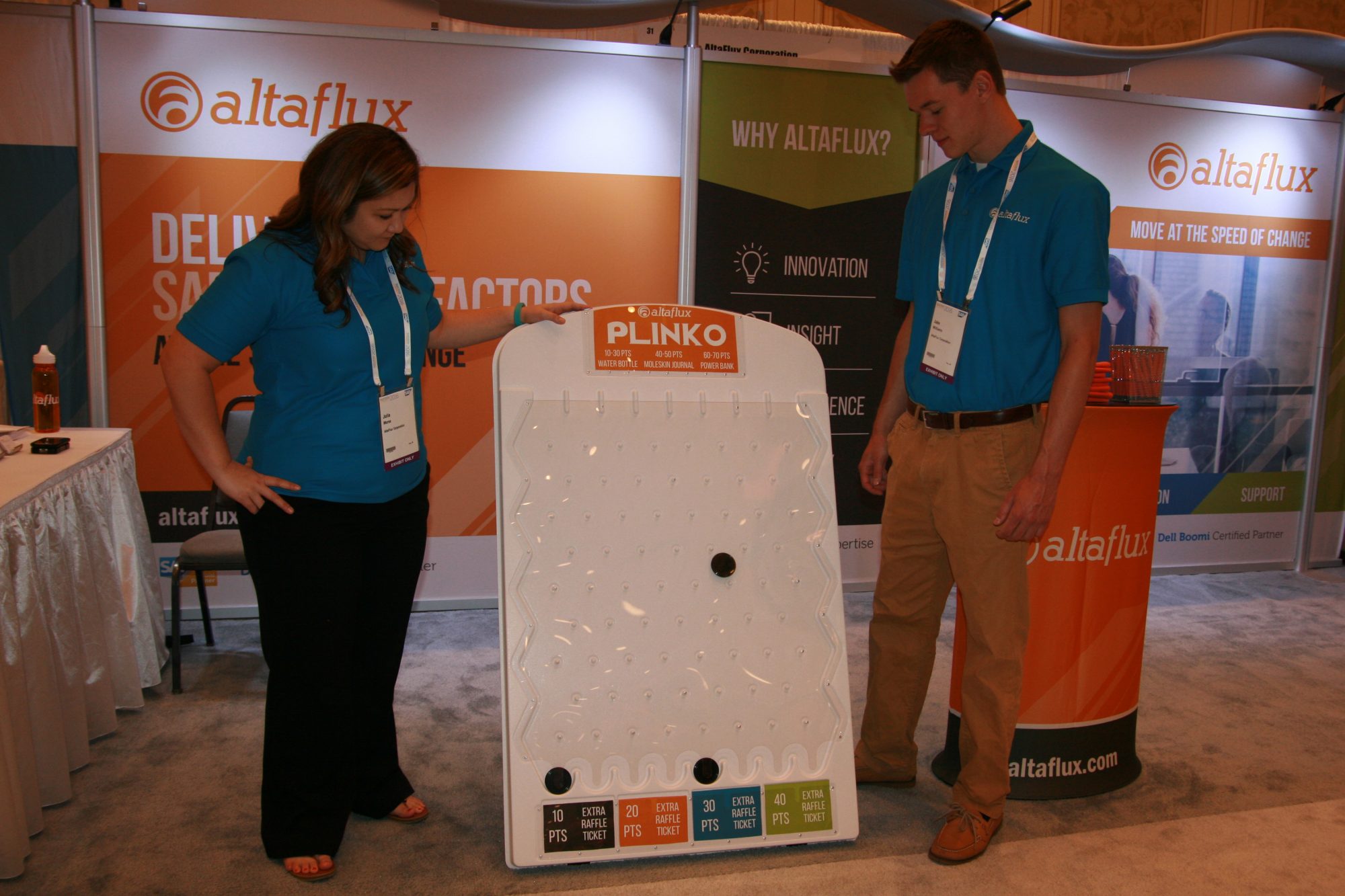 For his Aug. 30 afternoon keynote, SAP CEO Bill McDermott was interviewed by Ettling, who prompted him to reminisce about his youth growing up on Long Island, graduating from a local university, and competing with Ivy League graduates for his first corporate job, at Xerox.

“We get to the end of the interview, and (the CEO) says, ‘Bill, it’s been really a pleasure meeting you… The HR department is going to give you a call in the next couple of weeks.’ To which I replied, ‘I don’t think you completely understand the situation, sir.’ And he kind of tilts his head like, ‘what’s this kid up to?’ And I said, ‘I haven’t broken a promise to my dad in 21 years, and I can’t start now. I guaranteed him I’d have my employee badge in my pocket tonight when I go back to Amityville.’ He kind of really tilts now, and says, ‘Bill McDermott, as long as you haven’t committed any crimes, you’re hired.’”

Like Arianna Huffington, basketball royalty-turned-businessman Earvin “Magic” Johnson’s appearance at SuccessConnect was likely meant to evoke the “human” side of SAP SuccessFactors’ key sector rather than its “resources,” but one thing is certain: members of the audience, especially those Johnson took selfies with, were thrilled to hear the tale of how he went from a boy too many believed had no prospects in life to the co-owner of his former basketball team, the L.A. Lakers, and several Starbucks franchises (really!). 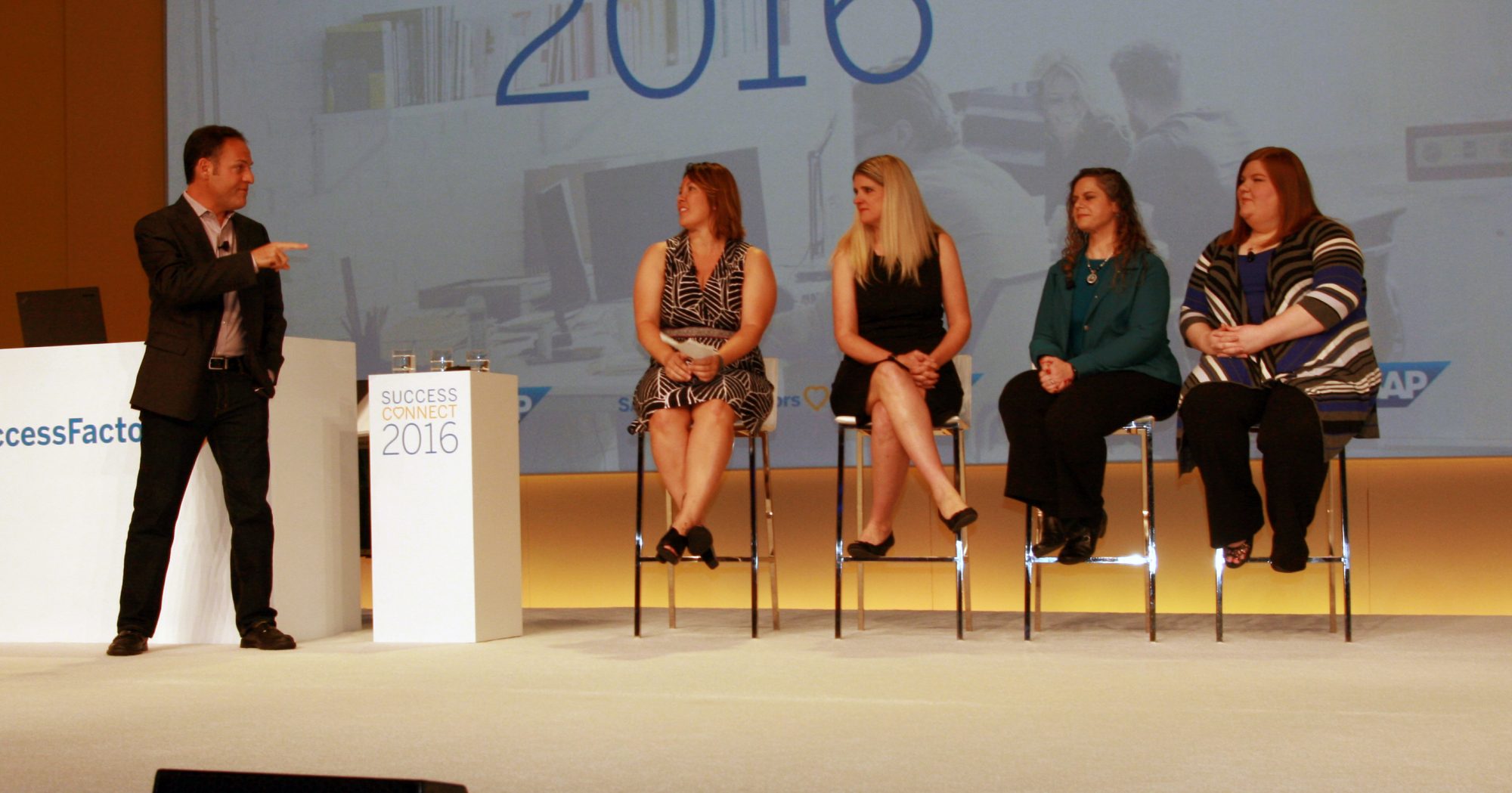 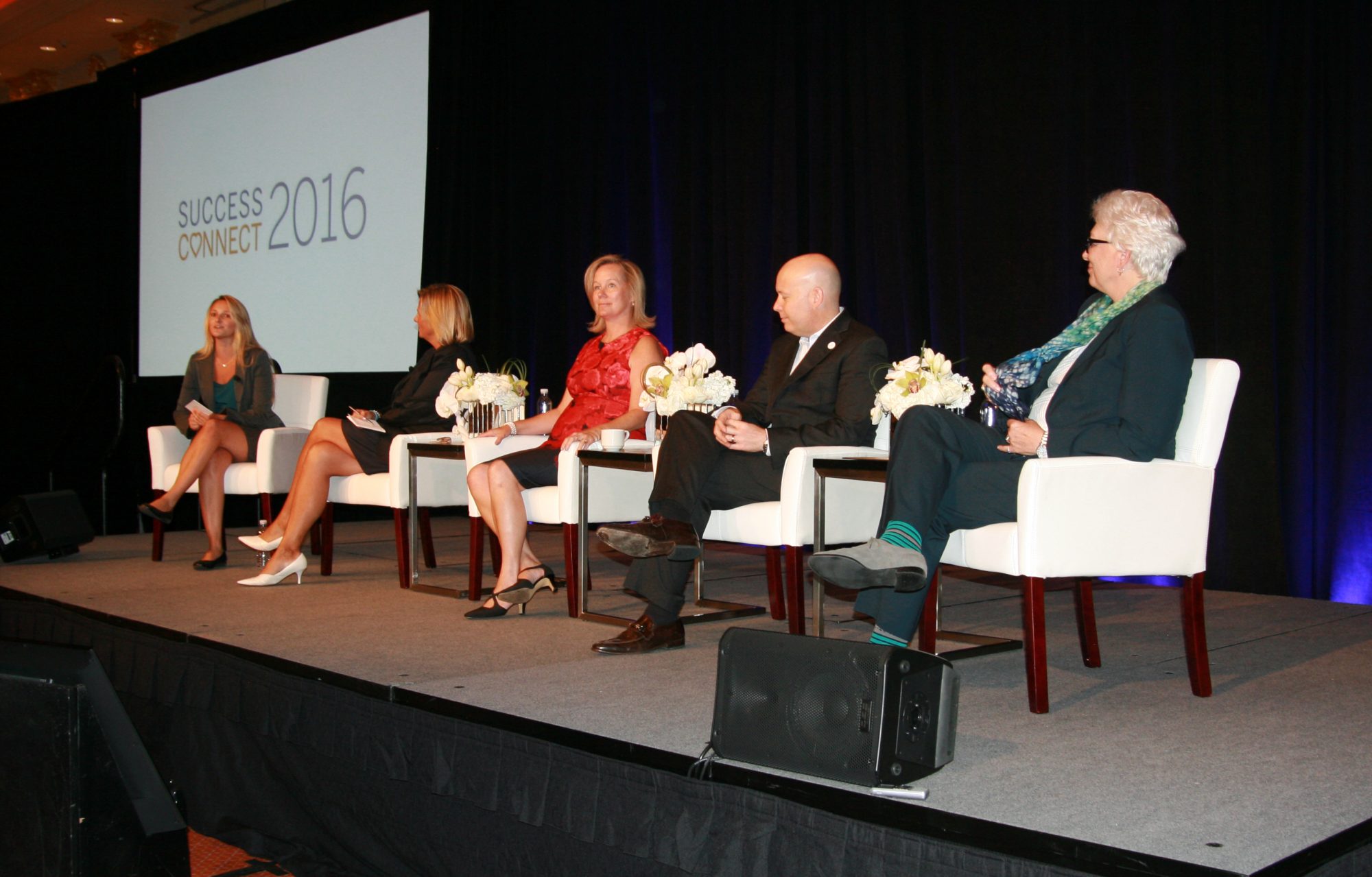 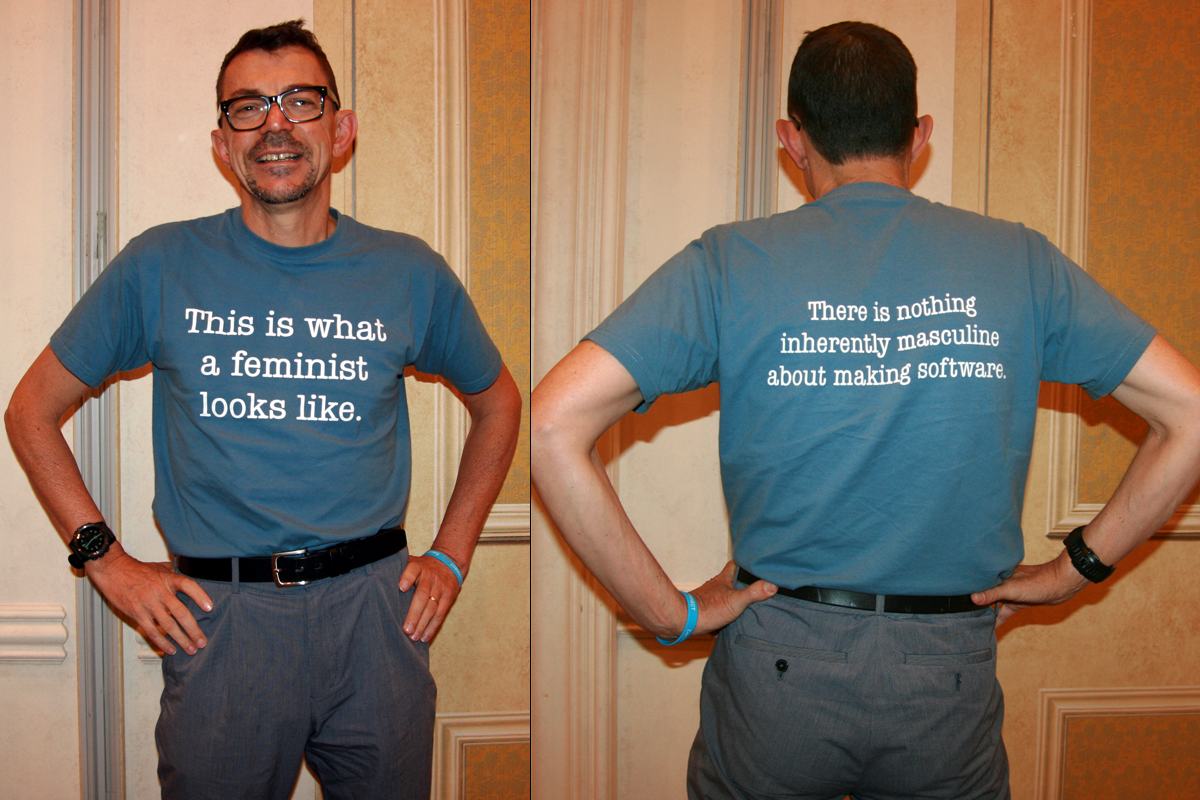 SAP SuccessFactors group vice president of product management Thomas Otter received lots of applause for wearing this shirt when he came onstage during his portion of the Aug. 31 keynote. (It’s a quote from a member of his payroll development team, Daniela Lange.)