Microsoft Corp.’s Windows Store will be the only way to buy Metro-style applications in Windows 8 and the pages advertising application sales will be exposed to search engine results, according to a software director at the software giant.

Microsoft confirmed rumours it will include a Windows Store comparable to the Mac App Store in Windows 8 at its Build conference in Anaheim this week, and revealed more details about the yet-to-be-released store in a Wednesday session given by Ted Dworkin, partner director of program management for Windows Web services. Questions yet to be answered by Microsoft include what cut, if any, it will take on sales of applications over the store, and how sales of legacy desktop applications will be handled.

The digital storefront will be the only place to find touch-friendly Metro applications being added to Windows 8, Dworkin told the audience. But Microsoft will allow for sideloading of apps too.

Microsoft will offer a solution for app transactions, including in-app transactions, but will also allow for developers to use a third-party to handle transactions if they choose. “We will give you choice, and you of course will retain pricing control,” he said.

Dworkin wouldn’t comment on what commission rate Microsoft would be taking on app sales through the store. Blogger Paul Thurrott at Windows SuperSite, originally wrote that Windows Live president Steven Sinofsky said there would be no fee on each app sale. But reviewer documentation shows there will be different licencing models for legacy desktop style apps and Metro style apps. While Metro style apps will have forced centralized licencing, legacy desktop apps will not have to do this.

Not charging a commission on app sales could be good for Microsoft, should it choose to make that move, says Al Gillen, program vice-president of system software at IDC Corp.

“Jump starting the eco-system is more important to Microsoft than to make a bit of revenue off that commission,” he says. “I could see them doing zero commission.”

The store is designed in the sliding screen, tiled fashion of the Metro user interface. It is built in HTML and Javascript, and its goal is to expose as much app content to as many users as possible, Dworkin says. “You want the least amount of friction between you and the customer getting your app.” 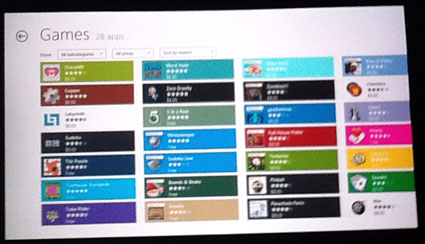 A typical design for an app store, Microsoft will offer a home page that leads to category pages or a spotlight featured app. App pages will list the name of the app, the user rating, display screen shots and a developer descriptions. It also shows what aspects of the system hardware the device will use. 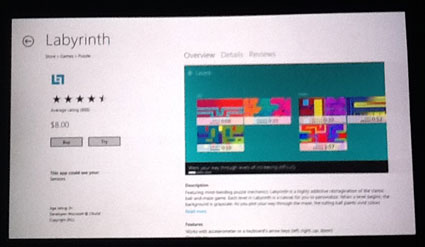 An example of an application page.

“We will be reviewing what hardware resources you’re accessing to ensure that it is tied to the value offered by your app,” Dworkin says. “Otherwise, it will not be allowed.”

Developers will sell apps with on an account-based licencing model similar to Apple’s App Store. Microsoft will impose a machine limit on the number of installs that can be done, but didn’t say what that limit would be.

Internet Explorer 10 will also offer integration to the store through a Web site. With a couple lines of code, developers will be able to add a small charm to the bottom ribbon that displays when users are viewing their Web site. Clicking that button will take users to download the app.

The Windows Store has a simple design.

Microsoft will also allow developers to place advertisements in their apps, and will offer a first-party solution to do this. But again, will not make developers use that ad placement system if they want to implement an alternative.

Some developers attending build complained on Twitter that Microsoft will not support dot-NET applications in the Windows Store. “Did Microsoft just implicitly give .NET a death sentence?” wrote Philip Laureano, a self-descripted dot-NET “junkie.”

Brian Jacksonhttp://www.itbusiness.ca
Editorial director of IT World Canada. Covering technology as it applies to business users. Multiple COPA award winner and now judge. Paddles a canoe as much as possible.
Previous article
Analysts question if Windows 8 will be limited on low-power processors
Next article
Vendor, support channels not ready for $408M M2M demand