Microsoft urged enterprises on Tuesday to adopt Windows 8, its upcoming OS for desktops, laptops and tablets which some industry experts believe faces an uphill battle for acceptance by IT professionals.

At a keynote speech at TechEd North America in Orlando, Microsoft officials outlined a series of reasons for enterprises to seriously consider upgrading to Windows 8, which is expected to be commercially available before the end of this year. About 10,000 IT pros are attending this year’s conference.

However, analysts at Gartner, IDC and other IT research firms have expressed skepticism that IT departments will embark on wholesale Windows 8 upgrades, since many companies have just finished, or are in the midst of, upgrading to Windows 7 from Windows XP. 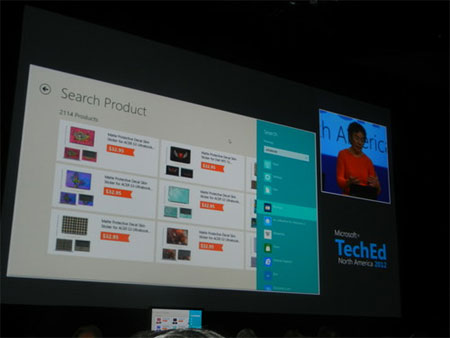 Microsoft on Tuesday also announced improvements to its Microsoft Desktop Optimization Pack (MDOP) suite of IT management tools, including the availability of Microsoft BitLocker Administration and Monitoring (MBAM) 2.0 beta, designed to simplify the process of provisioning BitLocker.

“Users are now able to recover their key through a self-service portal,” said Erwin Visser, senior director of Windows commercial business. BitLocker will be integrated into Windows 8, and the beta version now available supports Windows 8.

Related Story | Market Windows 8 to your customers before final release

Another improvement is the availability of a beta of Microsoft Advanced Group Policy Management (AGPM) 4.0 Service Pack 1, which offers a more secure way of controlling changes to Windows Group Policies (GPOs), according to Microsoft.

The new Windows 8 Metro interface, designed primarily for touch-based screens used in tablet devices, has also been criticized in pre-release versions as not being optimized for workplace productivity. Windows 8 will also feature a traditional Windows 7-like interface, but some testers have said that toggling between the two is inconvenient and clunky.

Still, it became clear on Tuesday that Microsoft will fight to bring corporate customers to the new OS. “Windows 8 is enterprise-ready by design,” said Antoine Leblond, corporate vice president of Windows Web Services, at the start of his speech.

For the next 90 minutes, he and Linda Averett, director of program management for Windows, alternated on stage, demonstrating a variety of new and improved Windows 8 features for enterprises that they argued are essential.

Windows 8 is “a better Windows” than Windows 7, Leblond said.

Windows 7 has its roots in Windows 95, and as such was built for a world in which most devices were desktop PCs connected to a power outlet, but now mobility and battery life management are critical because laptops and tablets have become so popular, he said.

Along with this shift, touch-based screens have become ubiquitous and people are always connected to the Internet, so applications and data need to be constantly available from the cloud. 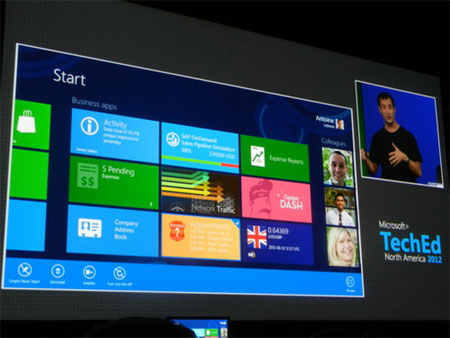 The Microsoft officials argued that the Metro user interface is intuitive and easy to use, whether with the touch-screen controls or with a mouse and keyboard, in tablets and laptops.

They showed a variety of the touch-screen “gestures” that are supported in the Metro interface, and how the tile icons that represent the different applications can be rearranged and grouped.

They also showed a variety of business applications that partners have built for the Metro interface — including an SAP prototype application for sales forecasting — saying that the look-and-feel of Metro applications is cleaner and generally superior, leading to a more productive user experience.

The Microsoft officials also made a point of demonstrating how one can have more than one Metro application open at the same time on the screen, and how it’s possible to toggle between the Metro interface and the traditional Windows 7-like interface.

They also ran through security, virtualization, management and performance enhancements, and reiterated that Windows 8 will run not only Metro-style applications but those built for Windows 7 as well.

However, this isn’t true for the version of Windows 8 that will run on ARM-based devices. That Windows 8 version, called Windows RT, will only run native Metro applications, but Windows RT devices will be able to run Windows 7 applications by tapping into them remotely in a data center using Windows Remote Desktop technology.

Leblond also demonstrated how Visual Studio 2012 can be used to build Metro applications, and pointed out that developers will be able to use their current programming skills and knowledge.

“It’s designed to let you take what you know right now and use it to build Win 8 apps,” he said.”All this stuff will be incredibly familiar to you and that gives you a head start on building Win 8 apps.”

The new Windows To Go feature was also highlighted. It allows users to build a “survival kit” of apps on a USB stick that holds a secure corporate image of Windows 8. Then users can access the apps simply by plugging the stick into any Windows 7 or 8 PC they can access.

“When you’re travelling and you want to do work remoately, you literally only have to take a USB key that fits in your pocket,” Visser says. “It’s an ultra-mobile scenario.”

It could also serve as a disaster recovery plan, allowing a remote worker to buy any PC off the shelf and get back to work in the event of trouble, he says.

With files from Brian Jackson