A Toronto-based mobile startup wants to transform your high-powered Android handset into a toddler’s play toy.

Kytephone is betting that parents with youngsters will want the new app to transform older Android handsets into a kid-friendly smartphone for ages six to 11. More than half of children under eight are using a mobile device for media consumption, Kytephone claims. This app isn’t just a child lock for your Android handset, it’s a fully redesigned user interface suitable for kids.

The idea for the app started as a simpler user interface for the elderly, explains CEO and co-founder of Kytephone, Renat Gataullin. But he realized that would be a shrinking market as the current young generation would be tech-savvy as they aged.

“We came up with this solution for parents to gradually and in a responsible manner introduce technology to their kids,” he says.

In addition to a new user interface, the app also gives parents the ability to supervise their children’s smartphone use through a Web browser. That includes location tracking on an interactive map, permissions settings that can be changed over the Web, a limited phone call list, and instant photo sync of snaps taken with the smartphone’s camera. Kytephone says children won’t be able to circumvent the app, even by restarting the phone or pulling the battery.

For parents who feel their children are already adept at using the iOS or Android user interface, they may appreciate the surveillance features, Gataullin says. Those features are there for parents to decide to use, or not.

“The use of cell phones is considered safe,” says Gary Holub, a spokesperson with Health Canada. “We always encourage parents to take measures to reduce their children’s cell phone exposure, especially if they are concerned.”

The main concern with cell phones comes from placing it up against the head during phone calls, he adds. There’s no particular concern related to Google’s Android OS or the Kyptephone app. 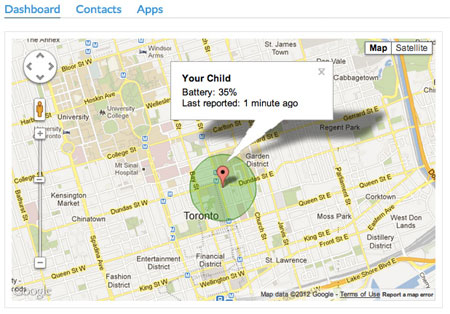 Kytephone allows parents to locate their children’s phones on a map.

“It’s a question each parent will decide for themselves,” says Kytephone’s CEO. “You can install the app and turn off all the connectivity, so you can still have the peace of mind knowing the kids will not be doing anything inappropriate.”

Though some parents may be concerned about their kids growing up too quickly.

“We wish our children could stay young forever, but that simply isn’t a reality,” Kytephone’s marketing materials state. “While we can’t protect them from all of life’s ups and downs, we can provide them with a safe and worry-free smartphone experience.”

Others may be more pragmatic about it.

“Parents are using us an excuse to get a new phone and give their kids their old Android handset,” Gataullin says.

The app is available as a free download in the Google Play store.